Zordon: “The answer to what is happening to you is here. You five are the Power Rangers.”

Hart: “Is this some kind of joke? We’re talking to a wall.”

Alpha 5: “I was kind of expecting a little more.”

I am not going to go into the full history of the Power Rangers, however it was a TV show originally using footage from a Japanese show, then imported this to the US with a change up of actors  – it became a touchstone for a certain generation, and now it is a big budget movie which was hoping to go on to become a successful franchise, after this entry it is safe to say that this particular incarnation is not going to go any further even with a lucrative international market.

This film revolves around five teens with the appropriate amount attitude, who are inexplicably brought together by coincidence or destiny to become the newest generation in a line of warriors known as the Power Rangers. The world rests in their hands as Rita Repulsa (Elizabeth Banks), a powerful witch and former Green Power Ranger, launches an assault seeking the Zeo Crystal with an army of stone golems called Putty Patrollers and a giant golden monster called Goldar.

Make sense of that if you can – there is a bit more to the story but i don’t want to spoil anything in case you actually see the film. If you are someone that enjoys a streamlined plot, with enough tropes to fill a small canoe then this is what you are in for – with the now expected overblown as well as little to fight for ending – this movie really does not have an original part to it.

With the US summer blockbuster season getting underway earlier and earlier every year, this is the prime time to release “Power Rangers”, as it gets a jump on what will probably be higher quality as well as possibly (hopefully) more high minded films. There is definitely going to be more sequels in the coming months, so launching a new franchise early could have be considered quite canny. It was also considered counter programming as it opened up at the same time as the monolith that is “Beauty and the Beast” (2017). Coincidentally the home released is also coming out at the same at the time as that much better received movie – I would watch that any day of the week compared to this.

I do believe with all best intentions that the studio did set out to make a movie that introduced new fans to the Power Rangers, as well as servicing the existing fan base, however what you end up getting is a mish mash of other films, which in some hands could be homage, but in this directors case is so ham fisted that it comes off as a rip off. The story telling devices if there are any come off as being extremely lazy. Dean Israelite, the director, whose previous film was the tired sci-fi teen time traveling movie “Project Almanac” (2015), has seemed to take a step backwards in this new film. It is filled with tired giant mechas fighting each other,  attempting to save a small town in the US, while at the same time absolutely destroying it – making little sense at all.

The young adults that play the five Power Rangers are all doing a perfectly fine job, obviously cast in the mold of the original five from the television show. However these characters, as written, are all now tired archetypal characters that we have surely moved on from. To set up these teens at the start of the film Israelite shamefully steals from the John Hughes classic, “The Breakfast Club” (1985) to make a point about the characters that the are misfits and rebels that fit into archetypes – something Hughes does but shows us that in fact there is more to people than meets the eye, we do not fit into one stereotype, we are more than the sum of our parts. Of course this is lost on Israelite who instead attempts to say teens are reductive and are exactly what they seem.

Another trend that has become tiresome and talked about in many other places is that the trailer for this film gives away the entire story, so if you have seen that then there is no real surprise in this movie – not that there should be.

There are some bright sparks, the early appearance of Bill Hader as Alpha 5 a robotic sidekick, he is also used as a tool for all of the stories exposition, he is great but even he gets tiresome and disappears for the entire third act which is disappointing. Elizabeth Banks seems to be the only major characters as the villain, Rita Replusa, who knows what film she is in and chews the scenery as much as possible. In fact by the time she appears I was hoping she would win and banish the Power Rangers.

If you are a fan of the original then you are in your thirties,  there is more out there for you with far more interesting films in the offering. This is a pretty soulless film that encounters the same problems many giant blockbusters face, it is not really aimed at anyone in particular, money has been thrown at problems with little thought for story, it runs at two hours which is half an hour too long, the set pieces look cheap and the problems are all solved with violence. When the characters try and bond with each other it does come off as lip service and attempted character growth – which ends up failing.

Now, with all that said if you want to own a big movie and watch at home with the entire family without worrying about reality or any real violence then this is the one for you. It may pay to explain to younger family members that young white boys are not always leaders, do not have the answers and may not save the world. 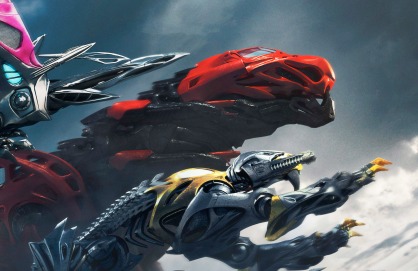