Ray Kroc: “I know what you’re thinking, how the heck does a fifty-two year-old, over the hill, milkshake machine salesman build a fast food empire with sixteen hundred restaurants and an annual revenue of seven hundred million dollar? One word: persistence.”

This is a film that doubles as a kind of biopic (although covering a brief period of time) and a correcting of a myth that some people may not be aware of. “The Founder” (2016) tells the true story of how Illinois salesman Ray Kroc met brothers Mac and Dick McDonald, operating a hamburger restaurant in southern California in the 1950s. Kroc subtly maneuvers himself into a position to take control of their company, which grows into one of the world’s best-known brands after he buys the chain for $2.7 million in 1961.

John Lee Hancock has been making movies for some time and has directed a number of ‘based on a true story’ movies such as “The Rookie” (2002), “The Blind Side” (2009) and “Saving Mr. Banks” (2013), as well as numerous produced screenplays – he is a pro of the first order although lacks a signature or real credibility like some auteurs have. In saying that, the one thing he can do is extract great performances out of actors that may not be known for the one thing they are employed for. Hancock was part of Dennis Quaid’s re-entry onto the A List with “The Rookie”, he assisted Sandra Bullock to her first Oscar win with “The Blind Side” and made the under rated “Saving Mr. Banks” with solid performances from everyone including Colin Farrell.

The star of “The Founder” is Michael Keaton, who from the opening scene carries this film like he has no other (maybe except “Birdman” (2012)), he is in every scene and plays comedy to drama to musical without any hesitation and is completely believable in every way – it helps he has a super supporting cast led by Nick Offerman and John Carroll Lynch, as the McDonald brothers. It would not surprise me after all these years that Keaton would win an Oscar for this role, after narrowly missing out a few years ago.

As the ‘hero’ of the story,  Kroc is a straight shooter, and after a disappointing work life he stumbles across the idea of McDonald’s, and can see it will be his golden goose and goes after it like his life depends on it. What is interesting is the fact that his belief is so strong everything in his life becomes secondary, his wife, friends and even what it means to be successful. There is no doubt that Kroc was ambitious but there is no way anyone that knew him could imagine he could be as ambitious as he is portrayed in this film. I cannot think of anyone better to portray Kroc than Keaton – he can switch gears from loving husband to ruthless businessman to a charming Lothario.

At its heart this is a film about how an idea can become a global phenomenon and a business that has its fingers in many pies, as well as being able to influence global business and politics. This is also a film about capitalism and success beyond ones own life. There is no doubt that there are winners and losers in life and within this movie – but on balance it is also about rigidity and flexibility and cutting to the core of any matter – maybe an example of how America used to be?

This is a very good example of what films can offer audiences in terms of a true story and the complexities that exist – the strength of the film is that it really is told from Kroc’s point of view – what may have been interesting is a story from the McDonald point of view – recommended highly.

If you enjoyed this then try: 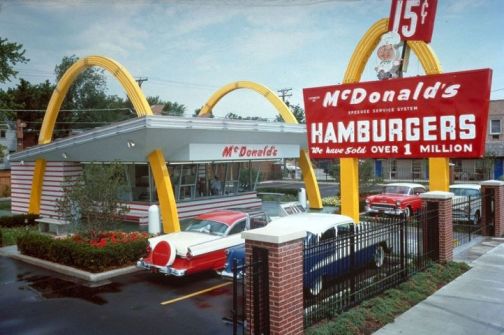