Directed by: The Spierig Brothers

Arthur Gates: “It’s a gargantuan seven storied structure with no apparent rhyme or reason. Each maze of halls more confusing than the next. It’s under never ending construction. It’s built on the orders of a grieving widow. Sarah Winchester is the majority shareholder of the Winchester Repeating Arms Company.”

Eric Price: “You want to take it away from her.”

The new horror movie “Winchester” (2018) should have been a slam dunk, it had so much going for it, based on a real person, on a real location, featuring a very accomplished cast with Helen Mirren, Jason Clarke and Sarah Snook all in original roles as well as being based on real people that were in some way involved in actual events. However, unfortunately what we get is just another haunted house story that revolves around some interesting charters, but with a narrative that is fairly unimaginative, which is a shame as the plot, as well as the general conceit, is really rather good. Not only that but the themes on display are as timely as could be, the way in which they are incorporated is unique as well. It is a real missed opportunity, in terms of the direction as well as the use of horror tropes, (not good ones) why these could not have been sidestepped for more originality as well as real scares baffles me as there was a relatively large budget for a genre movie made in Australia.

The talent behind “Winchester” is the Australian Spierig Brothers, who have been dabbling in horror for most of their career, with the interesting and surprisingly good “Daybreakers” (2009) that positioned vampires in a very different light as well as the excellent science fiction “Predestination” (2014) that played with the age old story of time travel. What both of these movies had in common was taking standard horror as well as science fiction and twisting it into what are thematically interesting stories. It seems though from there the Spierig’s have taken a wrong turn, with last years reboot/sequel of the ‘Saw’ franchise, the unimaginative and worst of all boring, “Jigsaw” (2017), as well as now with “Winchester” which as I have mentioned fails to have any real directorial drive as well as originality within the narrative.

“Winchester”  revolves around Sarah Winchester who is the widow of famed gun manufacturer William Wirt Winchester. Her husband’s sudden death and the previous death of their child Annie have left her in grief. Having received more than $20-million dollars in inheritance, Winchester convinces herself she is cursed by the ghosts and ends up building an enormous, seemingly never-ending mansion. The house is under constant construction and Sarah’s relative Marion Marriott lives in the house with her son Henry.

The Winchester company hires Doctor Eric Price to stay at the house and assess Sarah, believing she is mentally unfit to remain in charge of the company. Eric is grieving from the death of his wife Ruby and reliant on drugs. He arrives at the house and has a ghostly vision that he believes is a side effect of the drugs he has taken.

The very worst thing a movie can be is indifferent, which is what “Winchester” ends up being as the lazy choices made by its directors really do make this a mundane uninspiring viewing, which for a movie in the horror genre is a real crime. I have to say that the story on which this movie is based was known to me through a podcast, once I realised this the movie really piqued my curiosity, it made me genuinly look forward to watching something not only inspired by real events but with enough of the ‘real’ to make this scary as well as chilling – as the house still exists to this very day, you can go and see the haunting location.

Not only that, but for a horror movie to be able to cast Helen Mirren in the titular role is a very real coup for not only the genre but for the filmmakers as well. Mirren has made genre pieces before but this could have been a special role, she plays the part perfectly, all knowing ,as well as bringing a real character to life, that could have been played in a very arch way. Mirren also brings something else, that is directly to the production itself, quality, as it legitimises the movie before cameras even start rolling as she is an A list actor all the way. Mirren also challenges the rest of the cast thereby raising their own performances, so we have Jason Clarke and Sarah Snook in roles, performing as well as they ever have in other movie. Clarke in particular spars with Mirren for almost the entire running time, he is excellent as a Doctor with his own demons who has to not only be believable as a strong man, but also as someone who has definite chinks in his armour.

The main theme beyond the horror of “Winchester” is of course quite obviously gun control, as well as the ultimate use of guns, that is shooting people either harming them or killing them. The mere fact that the main character of the movie has taken it on herself to act as the guilty party in gun deaths is something that may be unthinkable to certain segments of the population, but to others who are victims of this kind of violence I am sure that it is not only refreshing but something they would dearly like to witness in their lifetimes. The only time I can think where this has happened or at least as close as one could get is the recent decision of a large chain of stores in the US ceasing selling a certain type of firearm after the latest mass shooting there. The guilt as well as the decisions that Sarah Winchester makes in order to make changes to her company, such as attempting to mass produce roller skates, is admirable but in the end defeated. The reasoning is simple, these products will not make the money that producing and selling arms does, in the end there is no better profit maker than weapons, whether they be big or small. What I found refreshing was the personal responsibility that Sarah took on behalf of not only the victims but the perpetrators, much like J. Robert Oppenheimer did after realising he had helped develop the A-bomb. If more people did that then maybe the world would not only be a safer place but a happier one as well.

As I have said this is not a bad movie, in fact it has moments of real promise, the plot is very well put together, there is enough character development in terms of back story, motivation as well as the predicament that all find themselves in that I was engaged from almost the beginning through to the end of the movie. For me the issues lie in the execution of the movie itself as well as the choices that have been made to drove the plot along, that is the formulaic as well as trope ridden narrative that exists. There is no doubt in my mind that the The Spierig Brothers are capable directors who are no doubt able to make interesting movies, and they have. However when they have a property as good as this they really need to match it with more originality than jump scares or tired old techniques such as flashbacks to reveal the reasons why events are unfolding the way they are. There needs to be some more inspired reasoning as well as actual frights that come from logic as well as underlying stresses related to the main themes. The issue for the directors is that in the past twelve months there have been some truly great and memorable genre pieces not restricted to horror, like “Get Out” (2017) and more recently “Black Panther” (2018) where the narratives are as original as the plots themselves.

In saying all of that this is still a movie worth watching for the general story as well as the performances which are all excellent, it will open audiences up to a real story that transcends this movie. It will also hopefully open minds as to the damage that is the outcome of the proliferation of not only the production of guns but the violence that goes along with it. I only wish the talent behind the camera would have matched the talent onscreen as well as the quality of the story which would have made this movie something very special indeed.

“Winchester” is out in cinemas. 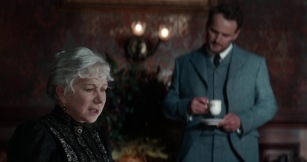