Voice: “What is a Jaeger? A Jaeger is the pinnacle of human invention. When the monsters came we did now wait for heroes to fall from the sky and save us, we saved ourselves. Innovation is our superpower. What is a Jaeger? It’s you times a thousand. Tall as a mountain with a beating heart that burns as bright as the sun, enabling us all to become the most heroic versions of ourselves.”

How times change, after the release of “Pacific Rim” (2013) a Guillermo del Toro directed piece of science fiction that wanted to straddle the worlds of Wells and Lovecraft, that featured some of the hottest up and coming stars of that year in Charlie Hunnam, Idris Elba as well as some fine characters actors in Ron Pearlman, Max Martini, Clifton Collins Jr., Burn Gorman and Charlie Day, it seemed the stories of Kaiju’s and Jaeger would never have another outing. With an outsized budget of US$200 million dollars and a really rather middling box office of US$411 million (most coming from International markets) there was little appetite for a sequel. Come 2018 with the more expensive actors as well as production people replaced by what really are B and C actors we now have a sequel in “Pacific Rim: Uprising” (2018), with a budget far less at US$150 million (even less when factoring in inflation) this has not been the hit that the studio (Legendary /Universal) or the producers had hoped for. With all the best intentions in the world, no matter how much story or plot that is attempted this potential franchise is still built around monsters fighting giant machines, which is of course its greatest strength, but also remains its greatest weakness, as does the unbelievable amount of collateral damage that is caused in every single action set piece of which there are more than a few, maybe too many as it transpires.

This sequel co-written and directed by Steven S. DeKnight who is possibly best known as a genre television writer has never been at the helm of a movie either as writer or director – for most of “Pacific Rim: Uprising” he makes a decent enough fist of it, although I do question handing the reigns of such a large budget to someone with very little actual experience. Where the lack of ideas as well as originality does show is in the general story and action that appears onscreen as well as the plot reasons as to why there is even a need for this sequel, when the original itself was not only uninspiring but very middle of the road with no real genre flourishes or originality beyond the fact that there were giant machines fighting giant monsters. I have pointed out continuously that just because there is a great idea for a movie, and don’t get me wrong the general conceit behind both ‘Pacific Rim’ movies is very good, it is the small details that make that good idea into a great film. Unfortunately, there is just too much of a plot to fit comfortably into the modest running time and budget. What is amusing is that it is the exact opposite problem that the first movie had, not enough plot, too much confusing fighting and issues with the world building as well as clearly defining not only the antagonists but too little seen of them and their location.

“Pacific Rim: Uprising” is set ten years after the Battle of the Breach, former Jaeger pilot Jake Pentecost – son of deceased Kaiju War hero Stacker Pentecost – makes a living by stealing and selling Jaeger parts on the black market. After he tracks part of a disabled Jaeger’s power core to the secret workshop of fifteen year old Jaeger enthusiast Amara Namani, both are arrested and are given a choice between the prison or return to PPDC as an instructor with Amara as his recruit.

Upon arriving at a Shatterdome in China, Jake starts training Jaeger program cadets with his estranged former co-pilot Nate Lambert. Nate and Mako reveal to him that the Jaeger program is threatened by Shao Corporation’s drone program. Mako is due to deliver a final assessment to determine the authorization of the drones at a PPDC council meeting in Sydney, but is killed by rogue Jaeger Obsidian Fury before she can report. Her death prompts the PPDC council to authorize the drone program and order their immediate deployment. Upon destroying its reactor, they find that Obsidian Fury was controlled by a Kaiju’s secondary brain, which testing shows was grown on Earth.

What is the stand out element for me, in fact for pretty much the entire movie is the casting (as well as co-producer) of John Boyega who proves he is going to be a big star of the future outside his ‘Star Wars’ appearances, which is no mean feat, as type casting is not just a thing of the past. Here Boyega has to live up to the memory of not only his characters father but the fact that his father was portrayed by the fantastic Idris Elba who maintains a presence in all the movies he has appeared in. Boyega in this movie is equally charming as well as being caddish, a boy growing into a man, even while he is teaching others far younger than himself. Therein lies one of the problems with the movie, which is the fact that this movie relies far too much on younger actors as well as the miscast Scott Eastwood who while he has pedigree (his father is Clint Eastwood) is not a great actor at all – the only saving grace is that his father matured with age as an actor so there is hope for him yet. The two actors that seem to know what movie they are in as well as stealing the show are the holdouts from the previous instalment in Charlie Day and Burn Gorman who are at opposite ends of the spectrum in terms of performance but complement each other exceptionally well. As for the rest of the cast they are mostly unknowns who serve a purpose but are really just filling to the massive CGI fights that take place for a majority of the running time.

Of course the real stars of this movie are the Jaeger’s and to a lesser extent the rival Kaiju’s who are all CGI creations. Carrying on from the previous movie the world has already been built and it is obvious to see that the bulk of the budget has gone on rendering these giants of destruction. My only real criticism is that the actual world that these giants operate in is pretty drab, faceless and lifeless. It seems like the flaws of movies like “Man of Steel” (2013) and “Batman v Superman: Dawn of Justice” (2016) have been ignored here, as we are witness to hundreds of buildings in multiple cities being destroyed with little time being spent on the human cost or even the social cost which is a major mistake on the filmmakers part – surely audiences are beyond this, perhaps this is a reason why the movie is bland as well as fairly unsuccessful at the box office.

One of the aspects of the movie that is unforgiveable, something Marvel movies learnt after “Iron Man 2” (2010) is the setting up of sequels before the first or second movies are good enough or successful enough to earn these on their own. So we see in the closing moments of the movie a blatant attempt to set up another ‘Pacific Rim’ instalment which is ludicrous as this one was never going to be able to spawn one with these filmmakers attached. This, coupled with a rather too expansive plot means that this movie at times is a hard watch as it really does bite off more than it can chew in terms of establishing brand new characters as well as new versions of antagonists from the previous movie, again while dangling even more story for a sequel.

The question in my mind is simply should this be viewed in cinemas and I would say that “Pacific Rim: Uprising” is worth a watch but maybe at home on Blu-ray or a streaming service. This is a movie that in the ‘old days’ would have been a direct to video release at best, which would have been a nice surprise especially with the edition of John Boyega. So wait and watch at home, you will enjoy much more.

“Pacific Rim: Uprising” is out now in cinemas. 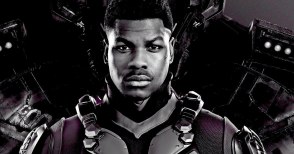