Written by: Rob Lieber & Will Gluck

Directed by: Will Gluck

Peter Rabbit: [From above]*Allergic* to *blackberries*?

Peter Rabbit: Is that even a thing? Is that where we’ve gone to? I mean, suddenly *everyone* is allergic to *everything*!

Peter Rabbit: [yelling at Thomas] Stop using it as a crutch!

Benjamin Bunny: You know, some people do have legitimate medical conditions.

Peter Rabbit: Of course, of course, it’s a real struggle, my heart goes out to them, it’s very tough, very sad, I don’t want to get any letters [looks at camera]

In my mind there is almost no better reason to see a move than when people want to boycott it, so I was very pleased to go along to my multiplex (with many other families) and enjoy this new version of “Peter Rabbit” (2018), when the above quote was issued forth (the reason for said boycott) it got a healthy knowing laugh from young and old – just priceless, Mr Gluck and Lieber deserved all the praise for not only that line but much of the enjoyment of Beatrix Potter’s timeless creations brought to life in a very unique way. The very fact that in 2018 it is possible to make a movie about Peter and his friends as well as being a truly touching as well as emotionally satisfying narrative speaks not only to Gluck and Co. but to Potter as well, not forgetting the incredible cast that has been lined up for this new adaptation. Of course being set in a post-modern world it is not a straight adaption but one that channels the feelings behind the characters as well as being a meta-narrative, with not only actual winks to the audience but bringing in a spirt of an origin story for the actual paintings of Peter as well as the writing of the books, albeit in a post millennium world.

This is a truly unique movie from the creative mind of Will Gluck who has had a nice career so far, he remade “Annie” (2014) which was actually pretty good considering the classic status of the original, turned Emma Stone into a star with one of the better comedies of the past ten years in “Easy A” (2010) which if you have not seen, stop reading, go and watch, I will wait. Gluck here has harnessed the best parts of both movies and combined it with a classic children’s character to deliver one of the better  films of its genre in recent memory – it has themes that are timeless and should not be shied away from, in particular the loss of parents, the reality of growing up, accepting people for who they are and a myriad of others that are touched on in unsentimental ways which for a movie like this is welcome relief. The movie uses real locations as well as a deft mix of CGI and real people to make you believe in what occurs onscreen. What I thought was wonderful was the motivations for all animals and humans are extremely simple and unconvoluted, there are no hidden meanings or grand third act reveals, just that learning and growing are parts of life and sometimes honesty is the best policy.

The movie is set in England’s Lake District Peter Rabbit, his cousin Benjamin, and his triplet sisters Flopsy, Mopsy and Cottontail, spend most of their days picking on Mr. McGregor and stealing vegetables from his garden. They are friends with a local woman named Bea who spends her time painting pictures of the rabbits as well as the surrounding nature. Bea takes on a mother-like relationship with the rabbits due to the death of their mother and father. One day Peter accidentally leaves his jacket in McGregor’s garden and goes back to retrieve it. McGregor spots and catches him, but suddenly dies of a heart attack. Enthralled, Peter invites all of the woodland critters, and then takes over McGregor’s old house.

Meanwhile in London, McGregor’s nephew Thomas works at Harrods department store where he waits for a promotion. He coldly accepts the news about his uncle’s death, but is infuriated over not getting the promotion and is fired. When he learns that his uncle’s house is valuable, he decides to refurbish it so he can sell it and start his own toy store to rival Harrods. He kicks out Peter and his friends and begins to secretly wall up the garden, despite Bea’s objections.

The cast of “Peter Rabbit” led by comedian James Corden who over the years has proven himself to be an able singer, dancer and actor, here he has to inhabit a role that is a bit of everything in terms of voice acting and he does it as well as anyone could or has before. The live cast is led by Rose Byrne and Domhnall Gleeson who play love interests of a sort, but are at opposite ends when it comes to the treatment of animals and where they belong in society. They are both accomplished comedians and have real chemistry as well as being able to act with CGI co-stars – not the easiest skill in the world. The voice cast is rounded out by Daisy Ridley, Margot Robbie, and Elizabeth Debickias as Flopsy, Mopsy and Cottontail also acting as the real comic relief as well as Peters younger sisters. These actresses all play very different roles with their obvious comic timing and understanding of the characters is key. All three almost steal the movie from Peter but it is his movie, and their own subplot is well written as to not overshadow the main plot.

The movie really is non-stop from the humorous beginning to the wonderful ending that lends itself to a possible sequel set in an entirely new location – maybe. What is unique is the way it treats it audience of (knowingly) young people who may be or know others that are going through changes that Peter and his siblings have and are going through. The biggie is of course the loss of a parent or parents, how that takes an emotional toll on those left behind as well the sense of unfinished business – how that thrusts children into a very different role to the one that they dreamed they would be in. It also illustrates the role of animals in our society as well as their complex relationships with each other and to humans – the encroaching human environment on the natural world, reminding us who was here first, and how that interaction is not black and white, cut and dry but complex and getting more so as human populations increase. Another part I loved was the interaction between Peter and Thomas who are at odds for most of the movie, treating each other with disdain and contempt, but what is interesting is how this relationship not only changes but reverses so that you feel sorry for Thomas and possibly see Peter in a new light. This is not a simple movie, it has humour that will appeal to a variety of ages as well as a variety of audiences of different levels of understanding as to what they are seeing.

One important aspect of this movie is the music used which is all imported from popular artists, it is used for the most part quite well, you will find it hard not to smile as music matches the story or the actions that are occurring onscreen. The fantastic thing is that the music is not only popular music, but original and classical which again is not common for a children’s movie in this day and age. Director/writer Gluck has experience and history in the music fraternity and it shows here, listen out for Sia as one of the voices, as well as singing. The music combined with the fast that Bea is a painter which is used to bring in the original Beatrix Potter’s artwork is a touch that while was not needed is welcome as it also opens the door to Peter’s parents as well as illustrating the monumental loss that he feels when he (and his family) look at the pictures – this is one of the strengths of the movie and will stay with long after you leave the cinema.

This is a comedy primarily, even though yes, it is a children’s movie, but the humour works one hundred percent of the time, so much so that this is the key into the movie as well as what makes the poignant parts so emotionally driven, which again is something that is great as it means the narrative is not being driven by sentimentality.

“Peter Rabbit” is one of my movies of the year, it has the right amount of everything, yes the CGI can be a little ropey but by the time you may notice that you will be too deep and invested to care. This is a movie for the entire family as well as a great jumping off point for conversations that may be driven by this film – go and see now, you will laugh and cry, I know I did.

“Peter Rabbit” is in cinemas now. 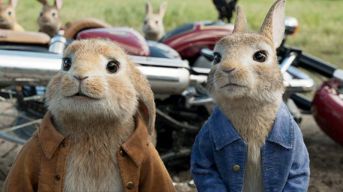 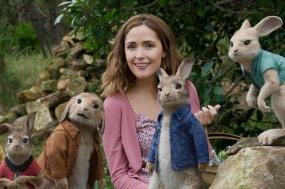