Vasily Stalin: I know the drill. Smile, shake hands and try not to call them cunts.

This week sees the release of a bit of an enigmatic film, one that is mired in truth yet seeks to mine laughs from one of the worst times in the history of a country that is littered with harsh times, mostly driven from positions of power onto people who were victimized left, right and center. No I am talking about China or the US, I am referring to Armando Iannucci’s adaptation of “The Death of Stalin” (2017) based on a graphic novel. In fact I can think of no better person than Iannucci who has satirized two governments in two very different countries in his BBC show “The Thick of it” (2005-2012) as well as his HBO show “Veep” (2012-present), not forgetting his Oscar nominated “In the Loop” (2009).

The difference here of course is that Iannucci with this film is basing his work around very real people who are all historic figures that are revered in today’s Russia. The complexity comes in those elements that are satirical to not undermine the millions of people that were murdered and/or silenced by a totalitarian regime that for all intents and purposes exists right now in Russia, and I am sure Trump would love to have one in the US. This is the challenge that the film faces, to Iannucci’s credit for the most part it has to be said that he meets his own lofty goals, the balance is executed well, however viewers may have to search this balance out and come to their own conclusions – particularly if that audience has some historical context of this time.

To say that this film comes at a time when world politics is not only at its most complex but also divided would be an understatement, we live in precarious times much similar to the times people lived under with Stalin, although it would be safe to say without the soldiers taking away loved ones at night. What is interesting is that this film had wrapped production before Trump took power or there was an election in the UK, however it is simple to draw comparisons between the head of state here to Trump or May, who are unpopular leaders that seem to utter idiotic statements almost every day without accountability or consequence much like Stalin. Whereas Stalin operated through fear and murder, Trump and May seem to ignore popular opinion marching to their own beat as well as truth – in fact Trump has made many statements that are actually from the Stalinist playbook.

“The Death of Stalin” as you might expect revolves around the events after Stalin is paralysed by a cerebral haemorrhage. When Stalin dies, Committee members rush back to Moscow, to say the least chaos ensues with many underlings positioning themselves for power as well as eliminating not only rivals but evidence of discontent as well as reveling truths about the previous Stalinist regime.

Apart from the plot as well as the narrative structure the element that stands out the most from this story is the casting of the actors as well as the choices to use extremely different accents throughout the movie. There should be no mistake made this is a deliberate choice on the part of Iannucci as well as his entire cast. What this choice reflects is, the way in which the Kremlin itself, as well as Stalin, (who was not Russian at all) and his cronies were constructed, all from vastly different backgrounds, geographic areas and education. In reality it would not have been uncommon to hear multiple languages as well as accents in the halls of the base of Russian power, and so this varied cast all speak in different accents, we hear American, Welsh, parts of England and Scottish – with a smattering of some Russian as well. What this does is highlight audibly the kind of place the Kremlin must have – confusion as well as fear reigning supreme.

The casting process must have been interesting for Iannucci as he has recruited extremely talented character actors both from the US and the UK with a mixture of dramatic as well as comedic actors. The great surprise of the cast is eminent stage actor Simon Russell Beale as Lavrentiy Beria who is a delight to see onscreen as his main medium is the stage, he matches up when you consider the actors he is portayed against including Steve Buscemi as Nikita Khrushchev, who must be the highest profile real life figure other than Stalin himself, Jeffrey Tambor the legendary comic actor as dimwitted Georgy Malenkov, the rising stars of Andrea Riseborough and Rupert Friend as Stalin’s children. Finally there is the wonderfully talented true character actor Jason Isaacs as Georgy Zhukov who looks like he is having the most fun with a broad accent overplaying the part to such an extent that he rivals Malcolm Tucker in his audacity – the fall cannot be far away. As with many Iannucci projects he is not afraid to cast big names in cameo roles, “The Death of Stalin” is no different with Paddy Considine, Olga Kurylenko, Michael Palin and Tom Brooke all playing colorful roles that are as unique as any in the film.

Like his debut “In the Loop” Iannucci has directed a film that takes place in a few key geographic areas but moves the camera like a pro making it seem like the characters are always pushing not standing around hurling abuse at each other. This is key to the film, one that fellow show runner, scriptwriter and now director Aaron Sorkin learned early on, you can have dialogue heavy scenes that operate more like action scenes than anything else. The challenge for Iannucci is three fold he has to give each of his cast enough time and space to make an impact, he has to balance satire as well as humor with events that are hideous and make the film look grand as well as big on a very small budget. To his credit Iannucci almost gets away with it, except he has possibly misjudged too many moments of humor, he could have actually made more dramatic choices but that might lay in future work. At this stage Iannucci has a shtick (that by the way is not an insult at all) and it works for him as can be seen by all of his work, which is more than most have ever been able to accomplish, he embraces his strengths while attempting to mitigate weaknesses possibly overcompensating in some situations.

If you are able to leave certain emotions at the door as well as ignoring some historical inaccuracies, if you are a fan of any of Iannucci’s other work then this will be an enjoyable trip to the cinema. It has enough of just about every aspect a satire should have to work, my only real critique is the way the subject matter is treated overall, in saying that I did enjoy “The Death of Stalin” immensely although it may have been because of little parts of each element that I really liked. Regardless if you need to have a giggle at events that are not to dissimilar to what some countries are going through at the moment (China, Russia, UK and of course Trumpland) then this may help to see what real despots looked like not that long ago.

“The Death of Stalin” is out now only in cinemas. 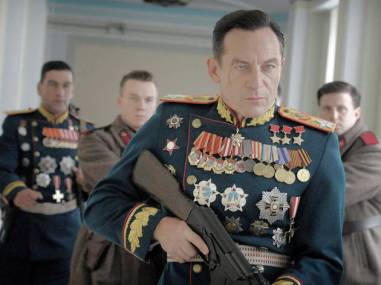 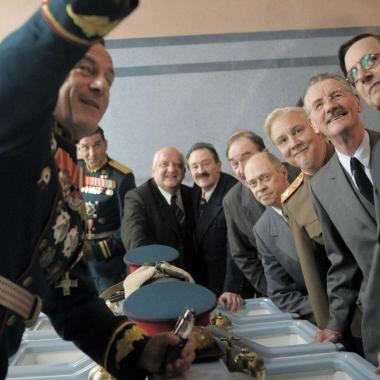