It seems like 2017 was a banner year for horror movies all over the world, I wonder if it could be a result of people reacting to the fractious political environment that reared its head from 2016 onwards. This new horror film follows on from the excellent “A Dark Song” (2017), both horror movies having recently been released on Netflix outside of the UK. “The Ritual”(2017) is best as well as easily described as a mixture of the timeless classic “The Wicker Man” (1973) as well as the more recent, and equally as classic “Descent” (2005). Whilst this horror film can be reduced to a pretty easy description this should not put any prospective audiences off, as there are truly some highlights to be enjoyed as well as being experienced. In fact the opening scenes are intense enough for not only the characters, but the audience as well, that they haunt the narrative right up until the end credits roll. The movie itself is predicated on an event that haunts not only the main character but his friends as well, something that leaves him (as well as the audience) clinging to his own identity for the rest of his life. We are all shaped by our past, our own experiences as well as those that we experiences in groups.

“The Ritual” is based on the book written by novelist Adam Nevill, experienced screenwriter Joe Barton who up to this project has primarily been a television writer has adapted it. The director, David Bruckner whose previous full length film is the horror/sci-fi “The Signal” (2007) from quite a few years ago, who has now retuned with a genre experience that is at once familiar but stunningly original in its execution for most of its running time.

The film involves a group of four friends, Phil, Dom, Hutch, and Luke, embark on a hiking trip in Sarek National Park, in northern Sweden to honor their friend Rob, who was killed six months earlier in a convenience store robbery. After Dom falls and injures his knee, Hutch consults the group’s map and decides on an alternate route through the woods that will take them half the time. The group begins to encounter unexplained phenomena, including a gutted deer and strange symbols carved on trees. As night falls, they come upon a rundown cabin and stay in it for the night. The cabin is mostly empty, save a strange wooden effigy in the attic shaped like a human torso, with antlers for hands. During the night, each is plagued by nightmares, and Luke wakes up with a strange set of puncture wounds on his chest while Phil is compelled to pray to the effigy inside the cabin. They continue their travels deeper into the woods trying to find a way out.

Like many great genre films “The Ritual” operates on a number of different levels incorporating many different themes as well as ideas that reflect what it is like to be human, both the fears as well as the bravery that makes us who we are on any given day in any given moment. It is no spoiler to say that the movie begins with a robbery that leaves one of the group of friends dead, while another is unable to escape the event, in his eyes he was a coward, doing nothing to help his friend or to stop the robbery – it does not help that it was in a liquor store, and both had been drinking. In fact this entire action hangs over the surviving friend like a sword of Damocles, much like the roof top scene from Hitchcock’s masterpiece “Vertigo” (1958) where the Jimmy Stewart character is left hanging on a rooftop where he metaphorically remains for the remainder of the film.

Another aspect of “The Ritual” is the way in which as people or in particular groups of people from former lives attempt to keep an older life going which we see in this film, in fact it happens twice once at the beginning where we see real life intruding on this attempt and then later when the group attempts to go for their misjudged hike in the Scandinavian wilderness. Of course if this sounds familiar within the genre it is a major plot point from the previously mentioned genre film “Descent”, which handled group tensions much better, here in “The Ritual” it is much more blunt as well as generic – maybe something to do with the different make up of male/female group dynamics. The reality of course is that invariably friends that are close in groups or cliques when they are younger split going of to do their own things and members of the group that are unable to make lives for themselves try and keep the dynamics stable. This is the role of Luke (Rafe Spall) who is at the very centre of the story as well as the one trying to maintain a status quo of sorts, of course it is him that is at the centre of the story who must make many of the life altering decisions and ends up being the reason for just about everything that happens not only to himself but everyone he comes into contact with for the entire film.

This film is based on a novel of the same name by experienced novelist Adam Nevill, it has been written for the screen by Joe Barton and directed by David Bruckner. Like many adaptations there have been alterations made to the film, which do work quite well, although the plot has been reduced to a fairly standard genre standard, this could be because of the relative inexperience of both director and screenwriter. In saying all of that this is a fairly reductive film that as I have said is an easily hybrid of both “The Wicker Man” (1973) and “Descent” (2005) (with a touch of “The Blair Witch Project” (1999) thrown in for good measure). Normally for me being able to see the common similarities to other films would be the kiss of death, however in this case I find “The Ritual” to be a most compelling genre film, in fact one of the best English films of last year. The elements that make it superior to many genre films are the psychological aspects as well as the group dynamics that are absent from the novel. The very fact that these changes have been made speaks to the upcoming talents of all those involved, not only the writer and director but the producers as well.

This is a very well executed film that takes advantage of superior locations that contribute to the mise en scène that reflects both isolation as well as a true sense of dread that follows the entire cast of characters and reveals itself to be true particularly in the final third of the movie. I can honestly recommend this as a fine watch that will stay with you long after the movie has ended, it is a truly creepy and bewildering and genuinely frightening film.

“The Ritual” is streaming on Netflix right now, check it out! 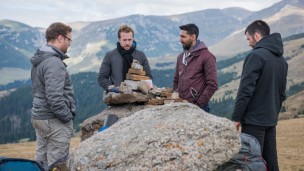