Commander Bolton: “You can practically see it from here.”

Apparently this is a film that writer/director Christopher Nolan has wanted to make for quite some time but had to wait some time so that he was able to prove to Warner Brothers that he could make the film within a limited budget, as well as within a running time that would be less than many of his previous movies. Nolan has done this by paring down the true story of Dunkirk by sidestepping many of the tropes that have haunted movies set during World War II, that is, he only shows scenes that are directly relevant to the plot and nothing else. As well as this he uses a varied time scheme to tell aspects of Dunkirk from three different points of view.

I have to admit that I have never been the biggest Nolan fan, I enjoyed “Batman Begins” (2005) but felt the two sequels were for the most part, bloated, as well as self-important. I did love his one two punch of “Insomnia” (1999) as well as “The Prestige” (2001) where he not only used narrative as well as plot ingeniously but also drew out some of the best performances from A-listers, Al Pacino, Robin Williams. Hugh Jackman and Christian Bale. In “Dunkirk”, the second movie this year about the biggest defeat of England by the Nazis, I am happy to say that this is a movie with extremely strong performances, great realistic action as well as a plot and narrative that are simple but at the same time extremely effective. This film was going to be a big ask of not only Nolan to deliver a compelling story but of audiences worldwide to take part in what is a truly emotional journey by all of the characters within this story.

Primarily “Dunkirk” is based around the allied soldiers from Britain, Belgium, Canada, and France who have been surrounded by the German Army on the beaches of Dunkirk, being evacuated in ‘Operation Dynamo’ between 26 May and 4 June 1940, during the early stages of what would become the Second World War.

One of the first things that hits you about this World War II action film is its cast all of UK origin, led by the increasingly compelling Kenneth Branagh as Commander Bolton who is trying to get his men back to blighty. Recent Oscar winner Mark Rylance plays a man trying to pitch in by sailing in his own boat to pick up the boys to bring home. He encounters Cillian Murphy one soldier who really does not want to see any action – his story is revealed later. The genius of casting such big names in a film that is more about the everyday soldiers is genius, it gives the audience who may not know much about the retreat at Dunkirk something to hang onto as the film unfolds. This aspect of the film also means that the audience is engaged from the beginning of the film to the very end, which is important as there is very little dialogue to explain what is happening in the various locations that Nolan is concentrating on in this version of the very real historical event.

This is by no means the first film about the events that occurred at Dunkirk, in fact it is not even the first film this year, that honor goes to the touching “Their Finest” (2017) which was a unique way of folding in many ideas about the war in England, as well as the defeat that the English faced at Dunkirk and how they were attempting to come back and win the war. The one film I would recommend to watch is “Weekend at Dunkirk” (1964), a French movie featuring the great Jean-Paul Belmondo – this gives an alternate view to what was going on with the French soldiers that were soon to be overrun by the Nazis with the invasion of France. There is in fact a lovely homage to this film early on in the initial section of “Dunkirk”. The reason for bringing these two films to your attention is that they give an alternate view of the event, one that Nolan’s film does not, in fact it does not show any other aspects other than the view of the immediacy of the British experience.

The beauty about this film is that Nolan has chosen to tell a single story that involves a limited time period of a few days, something he has not attempted since his excellent remake “Insomnia” (1999), everything he has completed since then has been sprawling; “The Dark Knight Trilogy” or extremely complex, “Inception” (2012). For an audiences to immediately identify with, I would argue that “Dunkirk” represents not only a return to simpler more formal film-making but also represents Nolan’s best work in over a decade, at least since the excellent “Batman Begins” (2005). The other more obvious part of this film is the running time; at a brisk 106 minutes it is Nolan’s shortest film since his debut “The Following” (1998). The reason this running time aspect of my review is important is because it physically highlights the greatest aspect of this film as well as the filmmaker himself – it also goes along way to establish the narrative peculiarities of this film, which while not unique in cinema could be seen as a break in the plodding narratives of Summer blockbusters.

“Dunkirk” is set over three distinct parts of the evacuation that is true, but it is also further narratively complex by having each segment of the plot set over very different time periods. So while almost every film compresses time to tell a story, “Dunkirk” does this to, but through three different parts of the plot. So, we have the first part of the story, titled “The Mole” set on the beaches of Dunkirk taking place over one week, the second part of the story titled “The Sea” set over one day and finally the third part titled “The Air” set over just one hour. This may seem confusing at the outset but one of the reasons to play with the timelines on specific stories is to bring them all together at the end for the climax of the movie – although there is a coda at the conclusion after the three strands of plot come together. The other reason to offer the three strands as well as the three timelines is to illustrate how the events at Dunkirk unfolded as well as where the significant areas were being fought by the British as well as the French. In fact in looking at this film the playfulness with the timing of the narrative is one of the bravest conceits in a studio movie for some time, and it is kudos to Warners for allowing Nolan to take such a step bearing in mind that this could have been a confusing element for some people to grasp.

This is indeed a Christopher Nolan film; right from the outset we are thrust into the film with only a small piece of preamble about what is occurring at Dunkirk, but no more. In fact there is so little dialogue you could be forgiven to thinking there is no dialogue at all, of course that is not true as there is some dialogue, the most compelling as well as contributing to some exposition is given by the excellent Kenneth Branagh as ‘Commander Bolton’ who has the showiest role. This is a film that shows how hard it was physically to leave the shores of Dunkirk through action and little else. We see through the eye of unnamed infantrymen how fast things could happen, in particular I was struck by how quickly ships would sink as well as how hard it was for men to leave these same ships – it is a tragedy to behold. The performances of the cast are excellent as you would once again expect, Tom Hardy as the fighter pilot, Farrier, as well as Mark Rylance the pleasure craft captain, Mr Dawson. But, as you might not expect it is the young Harry Styles who shines as bright as anyone as the infantryman, Alex, who enters the story late but is as effective as any other actor, we follow him and touch upon the emotion he offers, one of many boys among men who must come to terms with their mortality in what must seem a senseless waste.

In my mind this is the first truly great film of 2017, Nolan has to be acknowledged as a master film maker, mainly because of the ability of him to be able to fashion a simple plot of a real event that shaped the future of World War II, as well as steeling the British public for the horror that was to unfold over the next five years. This kind of film is a rare thing indeed, a war film not involving the Americans, but dealing with loss, the ease in which people take others lives in battle – the strength that is shown by people who do not need to help but overcome fear to put strangers needs before their own.

This is a film that you should see on the big screen now. “Dunkirik” is out now only at cinemas. 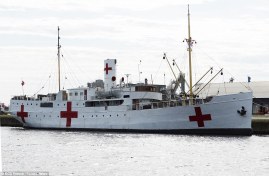