Alfred Pennyworth: “Were you looking at the old family pictures again?”

Batman: “I have aged phenomenally”

After more than a few comedies having been released this year, with more misses than hits, it is refreshing to watch “The Lego Batman Movie” (2017), have some honest to goodness laughs. I can happily report that this film picks up from where “The Lego Movie” (2014) left off, with appearances of characters from that excellent film. It was an extremely high bar that writer/directors Phil Lord and Christopher Miller set with their film, while this new film never reaches those consistent heights it does have more than enough to keep everyone very happy, with an expectation to look forward to the next instalment from the Lego franchise.

“The Lego Batman Movie” is set appropriately three years after the saving of the Lego Universe with Emmet, Wyldstyle and the rest of the band of heroic misfits. Batman continues fighting crime in Gotham City, attempting to vanquish the baddies – sort of. During a mission to prevent the Joker from destroying the city, Batman hurts his arch-rival’s feelings by telling him he is not as important in his life as he thinks he is, leading Joker to seek the ultimate revenge on him.

The following day, Batman attends the city’s winter gala as his alter ego Bruce Wayne to celebrate the retirement of Commissioner Gordon and the ascension of his daughter Barbara as the Gotham City Police Department’s new police commissioner, but is infuriated when she announces her plans to restructure the city’s police to function without the need of Batman. The Joker crashes the party with the rest of Gotham City’s villains, but has all of them surrender to the police. Despite realizing that this makes him no longer relevant to the city’s safety, Batman suspects his arch-rival is up to something and decides to stop him by banishing him into the Phantom Zone, a prison for some of the most dangerous villains in the Lego multiverse.

From this point the action and humour are ratcheted up with many many villains from the Warner archive making an appearance, I don’t do spoilers but the story is fun and great, you have to see it to believe the insanity that unfolds. At times the myriad characters almost seems to be out of control but the expert director knows when to show them as well as hold them so it welcome when there is a lull in the action.

Chris McKay, who is essentially making his debut as a film director has had more than enough comedy and animation experience from his extensive work on the television show “Robot Chicken” (2005 – present) where the fast paced humour, as well the homages to other properties serve him well here. McKay does an outstanding job of juggling the immense amount of characters, giving them all the time they need to make an impact, his own sense of humor is obvious as well as being broad enough for a wide audience. As a technical director  he moves everything so fast you would be forgiven if there were elements that did not hang together or were not framed quite right. However, in saying that, the pace of the movie can be frenetic, sometimes it would be nice for time to slow down a little, which trust me it does not.

As you would expect if you have seen “The Lego Movie” (and if you haven’t go out and get a copy now) the voice cast is second to none, it all starts at the top with Will Arnett who audiences demand return after his debut as Batman in the original film. Arnett’s portrayal of the Batman has to be one of the best around, it towers above George Clooney, Val Kilmer and the Ben Affleck. Arnett is able to distill with just his voice what makes the character so special, both parts of it – he is able to portray a soul that, is at once real but also lives in some kind of adult fantasy land where he has permission to work outside the law with no repercussions. This is an aspect that only Chris Nolan has been able to get close to, but the Lego movies do it with ease. Also of course, he is hilarious.

The remainder of the cast is of course top class, Rosario Dawson voices Barbara Gordon, the newly minted Police Commissioner who wants to work with Batman to clean up Gotham, Michael Cera as Dick Grayson/Robin who is conflicted to say the least, Ralph Fiennes as Bruce’s butler Alfred, more than a match for anyone in the film, while attempting to father Bruce, and who almost steals the movie. Finally there are the two main villains, The Joker voiced by Zach Galifianakis and Harley Quinn voiced by Jenny Slate who play off each other more effectively than two other actors who have played them recently. This film for all its laughs and craziness is about both positive and negative relationships as well the possible health of each.

The film, much like the first one is about family as well as what that family unit means, particularly in regards to shouldering responsibility and all that entails for young and old alike. Like the best-animated films this has a beating heart that resonates with anyone that will takes it’s pulse. If you don’t laugh and cry throughout this film then it is possible you don’t have a pulse. The truth is Batman has never been a true loner and definitely not the misery guts he turned into from the 1980s onwards, it’s been four decades and he needs to lighten up. This film not only shows why he, and of course we, need friends and that we should never shoulder all the responsibility all of the time – something in New Zealand we need to learn especially with our young people – in true Lego style it takes a village.

I recommend this movie whole heartedly, not only is it a great-animated movie it is a great film, with a message that never preaches but shows a valid point of view. The other important thing “The Lego Batman Movie” does is illustrate how to make a funny super hero film for all of those people that are too young for “Deadpool” (2016), this does that easily. In fact some of the other Warner/DC properties could take a page out of this movie’s playbook. 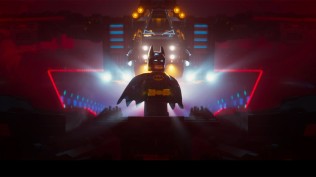