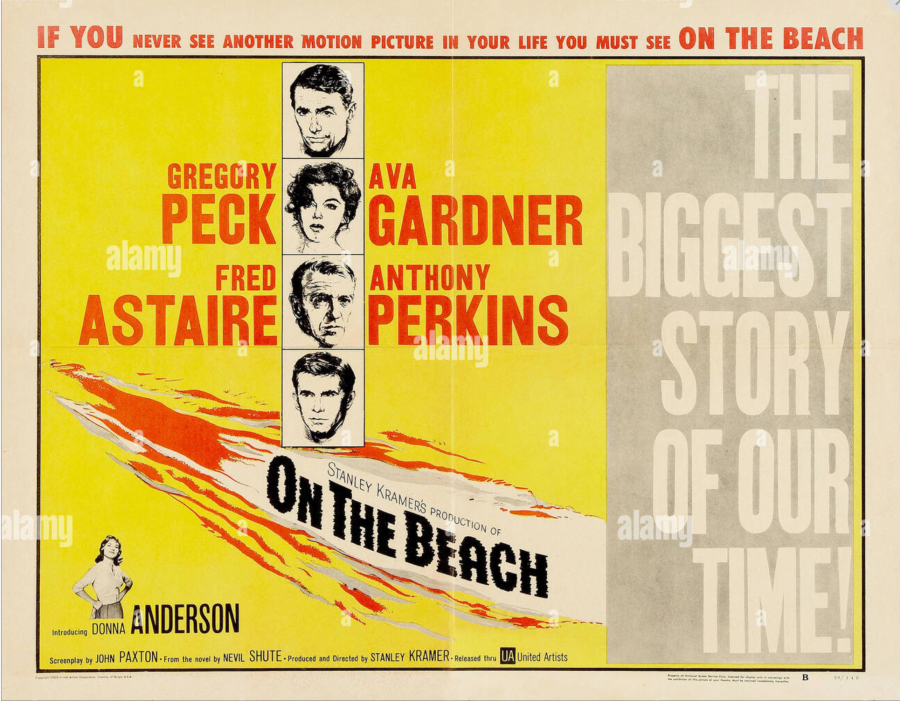 Written by: John Paxton based on the novel by Nevil Shute

Peter: “Now, this is a special kind of; – sleeping pill. I had a devil of a time getting ’em. But, I wanted you to have them on hand and to make sure you knew how to use ’em.; – What happens with the radiation is that you get; you get ill; and you start feeling sick and then you are sick and you go on being sick. You can’t keep anything down. You may feel better for awhile; but, but it always comes back. You get weaker.”

Peter: “Darling, you know nothing cures it. This ends it.”

Released recently on Blu-ray, and one might say at an opportune time is the Nuclear Holocaust drama “On the Beach” (1959) based on the novel by Nevil Shute who is one of the most celebrated authors of the first half of the 20th century who was based in Australia after World War II. Whilst not the first kind of its genre or even the most realistic in terms of portraying what might happen in the aftermath of a Nuclear conflict it did open the door for what would follow especially in the 1980s when the Cold War was at its height and the threat of some conflict was very much in the air, much like the threat that faces Europe today.

Growing up I remember loving this film not only because the subject matter was serious and realistic (to my young mind) about something that was talked about a lot but also because it was set in Australia with bonafide Hollywood stars. The film has Gregory Peck (Dwight Towers) and Ava Gardner (Moira Davidson) in the lead roles as well as Fred Astaire(Julian Osborn) whom I adored because I had seen him in many musicals, as well as Anthony Perkins (Peter Holmes) who I was fascinated with, like most because of his role in “Psycho” (1960), which he starred in after this film.

There is no doubt that the subject matter of “On the Beach” is challenging more so than most films produced around the time, even the ones that feature similar themes, that is because it takes its subject matter very seriously, especially when viewed through the eyes of the characters that are on show. There are very real archetypical characters on display that inform the audience of what this situation would be like, this is the strength of the film, even when at times it seems overly dramatic or sinks into melodrama.

The screenplay written by John Paxton has to grapple with two opposing forces that is the narrative that deals with the end of the world, very serious as well as engaging, all the while trying to bring in some human drama which is reflected in the love story between Peck and Gardener which seems forced in a way, it is something recognisable for the audience I assume. This love story for want of a better description is something that is absent in many other Nuclear Holocaust dramas, and it is easy to see why especially when the obvious outcome of a nuclear exchange would be, absolute devastation as seen the two landmark films of this genre, these being “Threads” (1984) and “The Day After” (1984). In fact the film that most closely resembles “On the Beach” is the film “Testament” (1983) directed by Lynne Littman that attempts to show a creeping death through a small town who have survived the explosions but slowly are enveloped by radiation. Like “On the Beach” it is a maudlin affair that seeks to show a small cadre of families dealing with their emotions in different ways.

“On the Beach” was directed by Stanley Kramer who at this point in his career was about hit his stride with some great dramas that not only reflected society but have become classics such as this film as well as “The Defiant Ones” (1958), “Inherit the Wind” (1960), “Judgment at Nuremberg”(1961) and a host of others. There is no doubt that Kramer had a talent for turning social commentary into truly entertaining art that informed viewers without preaching to them. Even in his most broad films Kramer is able to hone in on the aspects that are the most important or relevant. We see aspects of the loss that Hightower has suffered while on his submarine as well the loss that is to come in the relationship between Peter and Mary.

“On the Beach” features some excellent performances by Gregory Peck, Ava Gardner, Anthony Perkins, Fred Astaire and Donna Anderson who are all American imports that have to do a lot of the heavy lifting emotionally and all take their lead from Gregory Peck who was already a hugely successful star, who shines in having to portray someone who has lost everything but has to deal with the world that has been left behind. The strength of these lead performances really come into their own as the film progresses especially as it dawns on the characters as well as the audience that reality is on its way, there is no happy ending on its way. This may be a movie with huge Hollywood stars but there is no Hollywood ending in sight.

Whilst “On the Beach” attempts to base itself in reality it in fact rides a line between that and a fantasy that simply does not exist. Some of the hope in the film comes from the US submarine that arrives in Australia and then heads back to America to investigate the idea that the Nuclear fallout may be disbursing. This section of the film sees San Francisco fully intact but bereft of people, we see scenes of vacant streets, shops and homes, this will marry up with the final scenes of the film which makes a poignant point about humanity as well as its fragility. Of course to say that the aftermath would be like this is utterly ridiculous but maybe shocking the audience or the expense may have been too much. However in saying that the absence of any physical reality is more than made up for by the human story.

I recommend “On the Beach” wholeheartedly as both a time capsule of what was and perhaps a prescient message to us from the past about out present. It is an excellent edition with plenty of extras for those that wish to dig deep. I believe this is a film that you can see onscreen how important it was to all involved giving us something special, like so many Stanley Kramer films.

Disc One: On the Beach