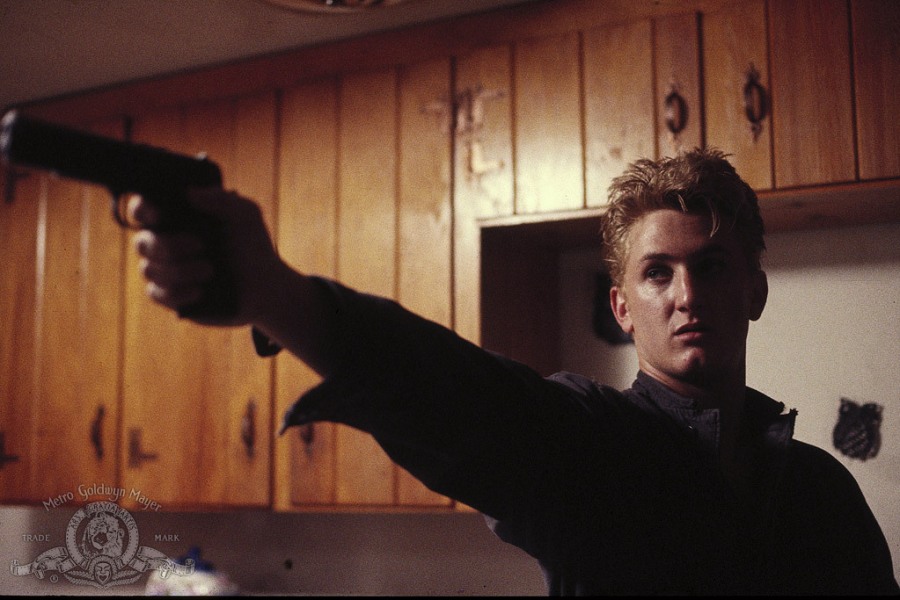 Brad Whitewood Sr.: “Most people who drive through here see farms. Houses, and fields, and shit. I see money, I see things, everything got my name writ’ on it!”

Released this week on blu-ray is the drama/thriller “At Close Range” (1986) a movie based on real incidents and people with a healthy dose of dramatic license but produced, directed and featuring actors who were all in early stages of their careers, and who are almost all still working in the motion pictures. “At Close Range” could is very definitely a drama with thriller undertones as well as some nourish elements that at its heart features a father/son dynamic that is at once complicated but illustrates the differences in people, their values as well as those relationships that help form them, it is also a movie about choices that are made everyday that influence and inform everything that we do as humans to ourselves and each other. “At Close Range” is the type of movie that is rarely made in todays marketplace, a true drama/thriller that is low-key in execution but has top performances that make it a familial story that is complex, tackles human dynamics and in fact may not have a satisfying Hollywood ending, it asks more questions than it answers and almost sets the major characters up as both antagonists and protagonists, in other words it attempts reality in a milieu that is known for anything but.

In watching “At Close Range” there are few elements that are immediately apparent, they are the absolutely fantastic performance on offer from almost everyone, but especially the leads, Sean Penn and Christopher Walken who are so good that it proves how reliable they have both been over the past five decades. There is also the assured direction from Foley, the great script from Kazan as well as some haunting music by Patrick Leonard and an assist from Madonna with the hit single ‘Live to tell’. All of these parts from a whole that is greater than the sum of its parts which leads to the question as to why this movie was not at the very least successful, at the most a hit. The reasoning is that at the time “At Close Range” was released it was not only lost on its opening weekend but the distribution company failed to properly market it, so it failed only being rediscovered on VHS, DVD and now blu-ray.

“At Close Range” is based around Brad Whitewood Sr., a career criminal and the leader of his family’s gang of rural back-door criminals. Sr’s criminal enterprises intersects when his son, Brad Whitewood Jr., a floundering, out-of-work teenager living in near squalor with his mother, grandmother, brother and mother’s boyfriend, comes to stay with him. When his father shows up in a flashy car with a pocket full of hundred dollar bills, Brad Jr. formulates a desire to join his father’s life of crime. At first Jr. starts a gang with his brother, Tommy, fencing their stolen goods through Brad Sr.’s criminal network. As a result of entanglements with his 16-year-old girlfriend, Terry, Brad Jr. seeks full entry into his father’s gang, but after witnessing a murder he tries to back out. Eventually Brad Jr’s gang is arrested while attempting to steal tractors, and the FBI and local law enforcement attempt to lean on Brad Jr. to get him to turn evidence on his father’s gang. There is familiarity within the plot but that does not lessen the plot’s impact on an audience, in fact it illustrates perfectly that family relationships are complicated no matter the setting.

Written by Nicholas Kazan and directed by James Foley “At Close Range” is a solid piece of film-making, Kazan had already had a handful of scripts produced while this was Foley’s second movie after his surprisingly good “Reckless” (1984). The quality of the production begins with them, it is a solid script adapted from a non-fiction book that retains the important themes as well as leaving room for the actors and the director to stamp their own creativity on the production. In fact in terms of Foley’s career this is an important movie as it not only set up his style, the way he would work but the next ten years of his working life, his work with Madonna, the trust well known actors would have in him, his links to popular music and his Mamet adaptation, “Glengarry Glen Ross” (1992) would secure his reputation as a professional that could handle complex material as well as meeting high expectations that continues today. “At Close Range” is directed as a contemporary drama (for its day) but is also heavily stylised and noir influenced which helps guide an audience through a family story that is within a recognisable genre.

This is also a movie with a cast that is littered with not only great leads but has a number of fantastic character actors that all shine in larger and smaller ways. Of course “At Close Range” is led by Sean Penn and Christopher Walken who are both fantastic as son and father, with a complex relationship that evolves throughout the movie made believable by their performances. The movie is further bolstered by some great performances by Mary Stuart Masterson, Chris Penn, David Strathairn, Crispin Glover and Kiefer Sutherland who were all in their infancy in terms of their careers but you can see the talent within, it is not surprising they all found success with their careers on their own terms which may indicate why all the actors give great performances, they all manage to standout at different times for very different reasons. After thirty years not only do their performances stand up but so does the movie itself.

There is a very good reason why some movies survive their initial release, becoming successful with each passing decade, in terms of “At Close Range” that has arrived on at least four different formats it is a complicated yet simple reason for its success, it starts with the plot but continues through to the writing, the direction and of course the performances of the actors that all belies its complex nature which is its heart a family drama not only about father and sons, but also what people are willing to do to themselves as well as each other. I recommend this movie highly to anyone that loves good stories, great performances as well as believable action.

“At Close Range”’ comes with a good 1080p HD transfer presented in 2.35:1 aspect ratio. This MGM catalog film has some problems, starting with some image stability, particularly at the beginning of the movie. It lets up quite a bit as the movie goes on, but it’s a little distracting. In addition to that, a lot of the film is shot in very low light conditions, which has this image suffering a bit from shadow detail and crush, as well as having the color and detail pop. However, in the well-lit scenes, the film has fairly good detail and bright colors that pop off screen. The detail reveals fine facial features and great textures in the costumes in both closeups and wider shots. There is also a nice layer of grain that keeps this movie in its filmic quality, never really fluctuating into heavy territory. The black levels are mostly deep and inky and the skin tones are natural. There are no real major compression issues, although there are still some instances of some dirt, scratches, and debris that pop up.

This release comes with a lossless DTS-HD MA 2.0 mix and sounds very good for what it is. This is very dialogue-heavy film that has some excellent suspenseful scenes of actions that pack a nice punch. The dialogue is always crystal clear and easy to follow as well, and free of any pops, cracks, hiss, and shrills. The score always adds to the suspense in each scene, while never drowning out any of the dialogue or sound effects, leaving this audio presentation with solid marks.