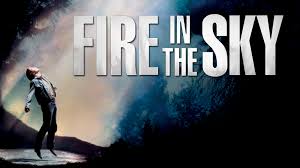 Written by: Tracy Tormé based on The Walton Experience by Travis Walton

Lieutenant Frank Watters: “I’ve been on a case since you disappeared. Where have you been the last five days?”

Lieutenant Frank Watters: “Dr. Wilson over at the hospital tells me you went without food and water all that time. Was it worth it?”

Travis Walton: “I don’t know what you’re talking about.”

Making its debut on blu-ray and in Australasia only is the science fiction movie “Fire in the Sky” (1993) purportedly from a true story by one Travis Walton about an alien abduction and of course return in the mid-1970s. Of course there have been many critical of Walton’s story especially those in the UFO community, nevertheless this does not effect this movie as “Fire in the Sky” is not only still a ripping good story, but this production still holds up, not only due to the tight storytelling, the still very good special effects but the quality of the cast who are not only still very recognisable but all have very good genre backgrounds. Now with its release on blu-ray, it is a welcome reminder of the kind of movies and television that was being made in the 1990s, there was an abundance of sci-fi being produced, in fact in the same year this movie was released Chris Carter would unleash the genre hit “The X-Files” (1993-2018). Of course it is inescapable that this movie does at times play like an extended episode of that show, which looking back makes it not only understandable but a little paint by numbers.

“Fire in the Sky” is begins in November, 1975 in Snowflake, Arizona, logger Travis Walton (D. B. Sweeney), and his co-workers—Mike Rogers (Robert Patrick), Allan Dallis (Craig Sheffer), David Whitlock (Peter Berg), Greg Hayes (Henry Thomas) and Bobby Cogdill (Bradley Gregg)—head to work in the White Mountains. Driving home from work, the loggers come across an unidentified flying object. Curious to learn more, Walton gets out of the truck and is struck by a bright beam of light from the object and is sent flying several feet backwards as if pushed by an unseen force. Fearing Walton has been killed, the others escape from the scene. Rogers decides to go back to the spot to retrieve Walton, but he is nowhere to be found. Making their way back to town to report the incident, the loggers are met with skepticism, as they relate what sounds like a tall tale to Sheriff Blake Davis (Noble Willingham) and Lieutenant Frank Watters (James Garner). They are suspected of foul play despite no apparent motive or knowledge of Walton’s whereabouts. I will not give away anything more but the narrative is told mostly in flashback from a few points of view, meaning the tension is heightened, although the plot does become fairly obvious. In the intervening years since not only the book it is based on, but this movie there have been many people that have debunked this, but it still makes for greta viewing.

“Fire in the Sky” was adapted by Tracy Tormé and directed by Robert Lieberman, both of whom were workmanlike creatives and who had experience in the sci-fi genre which shows in the plot and narrative that they have created, it not only looks great but movies along at a pace so that audiences are moving forward with revelations every so often as to keep them guessing as to what will actually happen next. Of course a movie like “Fire in the Sky” depends on how successfully the characters come across as not only believable but are worth caring about, so Tormé has given over enough of the first part of the narrative to setting up the main characters as good, honest and hard working while introducing the supporting characters with a wide array of personalities that are all archetypes of who you might find in a group especially those required in a sci-fi movie. So we have a tough bad guy, a young person, a religious person and a general mid western person who fit together but are always at each other until they are all drawn together to find out what happened to the hero of the story, Travis Walton.

With the cast in mind the movie is led by D.B. Sweeney who at the time was one of many young actors who were attempting to make their mark as leading men, Sweeney could have done worse than “Fire in the Sky” to make a mark, in fact up to this point he had appeared in some very well received movies. Here he plays the part as you might expect all ego driven at first then terrified by the end, he does a very good job, but for some reason this would be the last time he would lead a high profile piece, for the past twenty five years or so he has become a reliable character actor. In fact the same could be said for the rest of the cast with the two highest profile actors being Robert Patrick and Peter Berg as the exception, Berg is now an almost A list director and Patrick is one of the more recognisable movie and television characters actors working today. The cast all make the parts their own, even if there is a little overacting at times, which does suit the material, what is fun is seeing one legend in the always great James Garner who plays an investigating officer to perfection, as well as Noble Willingham as the local Sheriff, one of the best action character people who ever lived. This movie is made all the more palatable by these actors who really are a bit better than the material, of course they are all memorable in a sci-fi classic.

Many of the special effects movies from the 1990s onwards once released on blu-ray can sometimes look a bit amateurish especially if they are contingent on those effects to portray a believable story, one that comes to mind is the Charlie Sheen led “Arrival” (1996) which is heavy on effects and to be fair looks terrible by todays standards. What “Fire in the Sky” wisely decided was to eschew wide expensive effects shots with reactions from actors faces on what is happening with close-ups or lighting effects which work incredibly well and help protect this movie from ageing. Many of the big effects are left for Waltons retelling on what happened to him, but again instead of unproven CGI there is an abundance of in camera effects as well as closeups to mitigate budget and effects concerns, it works wonderfully, even in 2021.

Say what you want about the ‘actual’ events that occurred n November 1975, “Fire in the Sky” is still a very good movie with a lot to offer, it has a great conversion to blu-ray and would be a welcome addition to any collection, for me this is a must buy and the catalog release of the month.

Presented in an aspect ratio of 2.35:1, encoded with MPEG-4 AVC and granted a 1080p transfer, “Fire in the Sky” arrives on Blu-ray courtesy of Via Vision Entertainment.

The release is sourced from an older master that was supplied by Paramount Pictures. It is a solid master, although a new 4K or 2K master would introduce a more refined organic grain structure, delineation and clarity range from good to very good, and in some areas even excellent.

There are two standard audio tracks on this Blu-ray release: English: DTS-HD Master Audio 5.1 (48kHz, 24-bit) and English: LPCM 2.0 (48kHz, 24-bit). Optional English SDH subtitles are provided for the main feature. When turned on, they split the image frame and the black bar below it. The 5.1 track is the best, there are quite a few sequences where it significantly opens up the audio field. It has a very fine range of dynamic nuances, which tells me that when the current master was prepared it was optimized as best as possible.