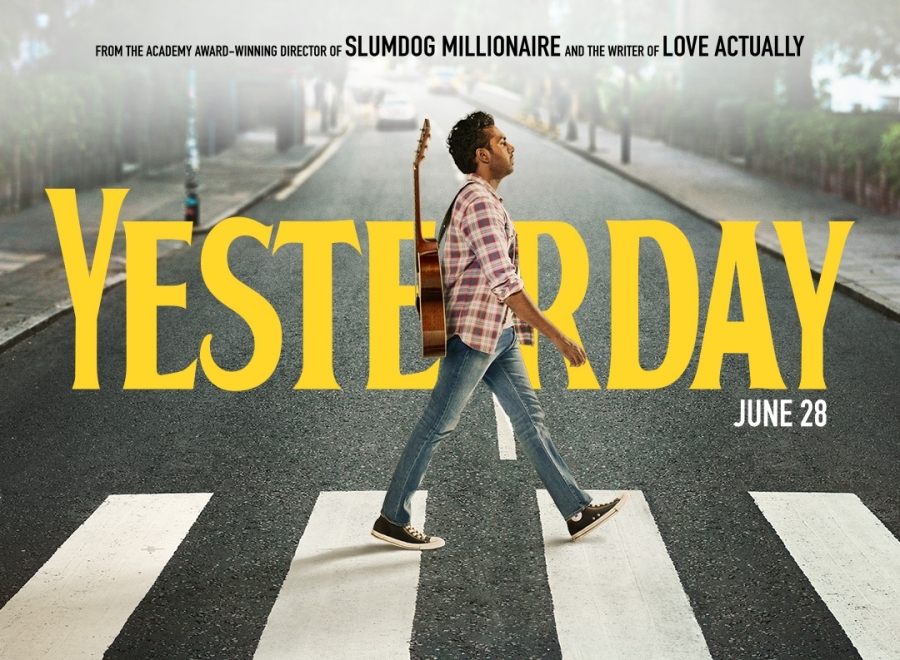 Released into theatres this week is the Richard Curtis penned “Yesterday” (2019) which on paper must have seemed like a good idea as well as a title that would capture the feeling of a high concept romantic comedy that had a genre twist, coupled with a back catalogue of Beatles music which would set up the Danny Boyle film as a critical and box office hit but actually lands with a thud which is a feat indeed considering the music must be the most beloved of all time. Interestingly “Yesterday” definitely feels like a Richard Curtis movie, it combines a love story, music, comedy, drama as well as a the feeling of originality but in fact comes off as a man in his sixties attempting to recapture something that has been lost, which is kind of the way the main character comports himself until he lucks on a situation where he is able to exploit the knowledge of the love people will have for an element that has either been forgotten or in this case, lost. Curtis has made a career out of romantic comedies, his best efforts have been coupled with directors who are able to filter his scripts into very special films such as the timeless “The Tall Guy” (1989), “Four weddings and a funeral” (1994) and his last good screenplay “Notting Hill” (1999). At some point however when he was able to gain enough power and success to parlay his screenplay success into a directing career cracks started to appear in his work, beginning with “Love Actually” (2003) which I found problematic but continues through to this movie where he has some very odd choices that characters make, in particular there is a theme of not only dishonesty but coercion which many seem to gloss over. Curtis also increasingly co-opts music in a way that is manipulative which has culminated with this movie, in the taking of the Beatles catalogue eschewing any real originality and using it to make a fairly standard genre movie involving alternate universes and the idea that what someone is looking for has been with them the entire time, certainly one of the most overused trope laden ideas in cinema history.

In my mind it is readily apparent that the most obvious element of this movie in terms of its production is the fact that Richard Curtis is not directing this movie and that Danny Boyle has been enlisted to take the reins which could have been a very good decision but early on it seems like Boyle has little emotional connection to the script. For a rom-com that has heady musical aspirations there really needed to be something unique as well as special for this to succeed which “Yesterday” lacks on almost every level. At its most basic this a movie that concerns the idea that what someone has been looking for has been in front of them the entire time which is a such an overused cliché that for this to be the central idea behind the narrative is frankly insulting as well as juvenile, something Curtis has been doing in film for what seems like his entire career. In fact Curtis as well as Boyle seem intent on hiding this central premise behind doors as well as attempting to disguise the unoriginality of the plot with not only the music of The Beatles but with recasting what may have been a white man with an Indian, increasing the amount of humour to such an extent that the characters portraying this humour seem like outlines of real people and of course casting Ed Sheeran as himself which seems like such a stunt that it is distracting, although maybe that was the point. All in all, as I have stated it seems like this is a movie made for old people, created by old people but with younger actors cast to portray some kind of idealised version that would be palatable to any audience.

This movie revolves around Jack Malik a struggling singer-songwriter from Lowestoft, supported by his manager and childhood friend Ellie. After Jack is hit by a bus during a global blackout, he discovers that no one else on Earth remembers the Beatles. Jack begins performing their songs, claiming he wrote them, and records a demo with local music producer Gavin.

Even though I have an issue with the actual movie there are some performances that are worth praising, in particular I found the performance of Lily James who after a slight stutter to the beginning of her career has recovered nicely to the point that routinely she is often the best part of any movie she appears in, almost always instantly memorable as well as being able to portray very interesting and real characters. Of course, James has to portray a character here who is nothing more than a shadow, a woman who would fit into the late 1990s or early 2000s not a fully formed person who should be seen now. The main character portrayed by Himesh Patel does an admirable job of leading the movie, but he is essentially one note, much like his performances of the music throughout the movie, even the last musical performance on a rooftop (really!) seems one note. As is de rigueur, this movie is peppered with some great character actors in the form of Meera Syal, Sanjeev Bhaskar, Dominic Coleman, Sarah Lancashire, Justin Edwards and import Kate McKinnon, but none really stick as they all seem present to prop up stereotypes and caricatures. Frankly the stunt casting of Ed Sheeran and James Corden seems a reach, unnecessary and a wink to audiences that is not required at all.

This is such a flawed movie that the message if there is one is lost in its own love for what it is doing through a plot that makes littles sense wrapped in a narrative that struggles to know what it is present for. The idea that any kind of media is more important than human life is patently ridiculous, that because some music is absent from the world means that there is a hollowness to life itself is frankly juvenile. This is a movie that also comes from another time, one where Richard Curtis was in his twenties not the age he is now. This is a movie that centres on a fairly ordinary genre idea that is never fully expounded on, that is never analysed, is just accepted by the central character (and a few others) with little other consequence, except for some side scenes and comments regarding Coke and smoking. There is no wider analysis carried out by anyone which renders the plot almost pointless.

That is not to say that if you turn your brain off you will not enjoy the movie but that comes from the fact that it is peppered with Beatles music, to get an audience to have fun with that music is a low bar, to me “Yesterday” belongs in yesterday.