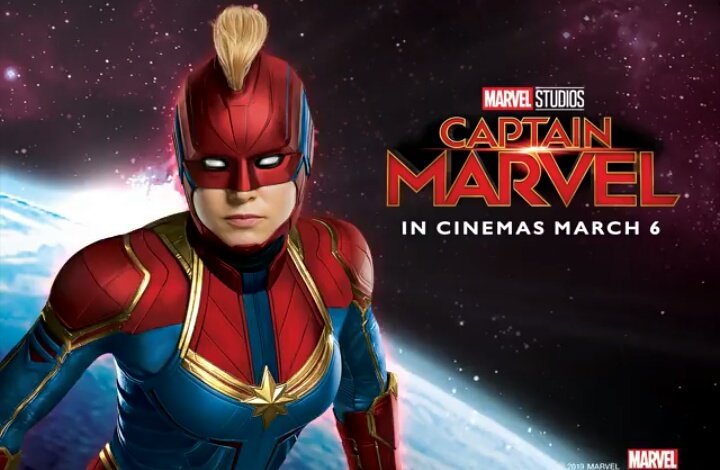 Carol Danvers:“Does announcing your identity help with the covert part of the job?”

Released this week into cinemas pretty much worldwide is the twenty first movie in the franchise known as the Marvel Cinematic Universe (MCU) in the form of “Captain Marvel” (2019) their first movie being solely headlined by a female character as well as introducing audiences to a handful of new concepts that may pave the way for the events following the conclusion to their first ten years in the highly anticipated as well as aptly titled “Avengers: Endgame” (2019). This new movie much like many in the MCU is an origin story that takes very familiar tropes that will be well known to audiences and bends them slightly in a few ways that will be refreshing, at least they should be. Firstly the filmmakers have used a flashback narrative to tell the main protagonists story as well as those around her, keeping revelations tight enough that if audiences go with the plot there will be some nice revelations in the third act. Secondly this is unlike many MCU movies in that it highlights actual character moments keeping the action as a fall back position, again if audiences go with that aspect they will be richly rewarded as many of the supporting characters are not only written well but they are performed well which is one of the main strengths of all the MCU movies to date. Thirdly, this movie treats the main protagonist, Carol Danvers, as a person with some deep psychological trauma, as well as someone who seems like a real person dealing with events seemingly out of her control until they aren’t, which of course is what we have paid to see. Lastly, Carol is not a statement maker for her gender, even though that is a big part of her character, she is just a person who is dealing with all the things that many of the previous super powered beings have had to deal with, control, trust, fear and responsibility and in the case of “Captain Marvel” she does it in her own way which is all anyone can ask, she becomes a leader as well as someone who will not take a backseat to anything or anyone.

Audiences are introduced to the classic Kree-Skrull war which was a huge part of the comic version of the Marvel Universe as well as casually being introduced to some of the major Kree characters in the make-up of the ‘Starforce’ which for fans is a real bonus. There is also a look into who the Kree are apart from Ronin the Accuser who was introduced in the fantastic “Guardians of the Galaxy” (2015) as well as the ‘Supreme Intelligence’. “Captain Marvel” also capitalizes on the cosmic elements also introduced in Guardians, moving further along so as to indicate a possible future for not only Captain Marvel but all who come after her.

What Kevin Feige has done with “Captain Marvel” is to put people at the helm, in this case Anna Boden and Ryan Fleck, who have never been in charge of a movie this big, this expensive, this pivotal and with this amount of spectacle but trusted them to deliver a unique experience that has something to say not only about the MCU but also something larger that has come to the fore in the past ten years. This is definitely something it has in common with last years MCU blockbuster “Black Panther”(2018) that is representation, history and the future of our own world and the societies that make it up, where we have been as well as where we are heading. Having Boden and Fleck involved in the directing as well as co-writing means that many of the more memorable moments are between two or three people talking about very real topics which gives the movie a real heart as well as emotions that play out right up to the third act which I found not only refreshing but very enjoyable. Boden and Fleck are most known for independent dramas that focus on people above all else, this is true of “Captain Marvel”. However one of the definite weaknesses of having untested blockbuster directors like these is that while they are supported by the MCU production machine the action can take a backseat lending a feeling of roughness and it looking very average, nonsensical or mixed up which reflects directly on the fighting scenes in the third, they look messy as well as a little boring. On the other hand with a woman at the centre, as the protagonist, there is a definite X factor to the action in particular because as a character she is one of the more powerful entities around, not only that but there is a coldness to her, which for me is welcome, she is not a ‘sexy’ hero bound to a love interest, she actually has more agency in her decision making as the plot unfolds culminating in revelations that means sh is ultimately in charge of herself.

“Captain Marvel” is set in 1995, it follows Carol Danvers, a former U.S. Air Force fighter pilot, as she turns into one of the galaxy’s mightiest heroes and joins Starforce, an elite Kree military team, before returning home with questions about her past and identity when Earth is caught in the center of a galactic conflict between two alien worlds.

As we all should know by now Brie Larson is playing the titular character in this movie, in her first real lead role since being awarded the Best Actress Oscar for “Room” (2015), which illustrated what kind of actress she is. Here in “Captain Marvel” Larson has to juggle her performance in a variety of ways, playing three very different personalities, having to judge a great many elements from scene to scene which is not an easy task in the slightest, she deserves a lot of credit on that front. In fact this might be the best performance by an actor in an MCU movie so far just because of the decisions she has to make especially if one analyses the plot and the way her character changes from the start to the end of the narrative. Of course where would any MCU movie be without the casting of some seriously great actors in what really are supporting roles that are all character driven, needing to be believable to the plot as well as their place within the MCU. I do not have enough time to go into all of them, there are just far too many but I will mention a couple. Firstly it was with some delight that one the best performances comes from Ben Mendelsohn as the head Skrull, Talos, who like a few other actors in this movie needs to change who he is playing not only from scene to scene but at times within the same scene buried under some heavy practical make-up, this has to be his best performance in a blockbuster to date, armed with a great character, some serious story beats, an arc and acting opposite great talent, for me he shines and I hope he returns to the MCU in some form or other.  Annette Bening is another actor playing three different roles one as the Kree Supreme Intelligence who is an A.I. that is in command of a warlike Empire, one a scientist and finally another who is a secret best left spoiler free. Bening who is a great talent does what Mendelsohn must but also adds some gravitas that only aids in this movie.

As with any MCU movie there is a huge amount of CGI in use, which sometimes can look a little ropey or unfinished, which is true for some of the work in “Captain Marvel”, however the big departure from other MCU movies is the use of the de-aging effects we have seen deployed before albeit in small parts not the centrepiece that it plays here with actors Samuel L. Jackson and Clark Gregg which for the former works well but with the latter actor looks very artificial and noticeably plastic. Of course these are both very good actors so performance is not an issue in fact for Jackson it is great seeing him for the much of the movie being promoted to fully fledged co-star he is magnificent and Gregg lends the movie a touch of class with his performance as fan favourite Agent Coulsen. However now that we have seen this special effect used for an entire movie it does have some way to go before we need to see it again which is a shame but also bodes well for its use in the future.

“Captain Marvel” is also a period piece being set for its vast majority of runtime in the 1990s which is referred to quite clumsily throughout with its use of now defunct businesses, the available technology as well as its use of music which for the most part was as you would expect although I did find the choices of music to be the most obvious that could have been chosen and so does not add to the narrative at all which for me was a missed opportunity.

This is by far a perfect movie, but it is does stand up to being one of the better origin movies not just for MCU movies but for all superhero movies, not only that it is only the second female led superhero to be made after “Wonder Woman” (2017) which was far from perfect, in fact the entire last third is so flawed as to have a negative effect on what went before. What sets “Captain Marvel” apart from all those other superhero movies (“Wonder Woman” included) is that it makes itself into a drama about the journey the hero goes on, which most viewers will be aware of. The filmmakers have made a conscious decision to tread lightly with their story which they could have easily hit the audience over the head with and make it obviously about girl power and all that entails especially in the environment we find ourselves in. Instead they opt to rob the main character of identity and history, making her bereft in a sea of nothingness while she realises that there is something missing she accepts the help of others to regain control of herself thereby freeing herself to become the best version of herself which is a powerful message in and off itself one anyone can strive for men or women.

I enjoyed “Captain Marvel” far more than I thought I was going to and I recommend it highly and it should be seen in cinemas, it has everything you could want in a MCU movie and still surprise after over ten years of this particular genre.