Jane Goodall: “The more I learned, the more I realized how like us they were in so many ways.”

The new documentary released this month on DVD, “Jane” (2018) is a very interesting as well as completely original document that not only charts some of the beginnings of the famed naturalist but concentrates on her former husband as well as her son, following her journey to end up in the present day with commentary on her work as well as where the world is headed. Sitting down to view this documentary I was ready and expecting to see Goodall in Africa surrounded by apes, being told about wildlife as well as the dangers of not only the disappearing animals but dwindling habitats, the negative aspects of humanity with a human story being told as well. What I actually viewed was something very different, inspiring, sad and eye opening as well as something that was very entertaining. “Jane” asks what is given up in spending a life in service to one thing, from many different sides which for me was a revelation, sacrifices are witnessed in this documentary by not only Jane but her entire family leaving a legacy that is rarely seen in modern life away from the public but realised by one in this poignant film that is expertly framed by candid film footage shot by Jane’s compatriot, first husband and father to her only child.

This year has been an excellent year for documentaries not only on streaming or DVD but in cinemas which is a trend that goes against what many people may have expected. However I find this to be exactly what should be expected especially with the concentration of so-called ‘fake news’ that now exists on the internet, coupled with what has been coming from the White House under the Trump Presidency. In fact there was a thought that cinematic documentaries might be a thing of the past especially with the success as well as saturation of Disney-fied blockbusters invading multiplexes, in fact audiences have been flocking to cinemas to seek out stories about real people making real differences in times and places where many others have been marginalised and made powerless by the people in charge in their respective times. Some of the great, as well as critically received, not forgetting making money documentaires at the box office are: “Wont you be my neighbour?” (2018), “Three Identical Strangers” (2018), “RBG” (2018),  “McQueen” (2018), and my personal favourite “Bombshell: The Hedy Lamarr Story” (2017) with so many more. What this says about audiences is that they will seek out true stories told in the relative first person that are not only inspiring but are direct counter programming to the politics of the day as well as the lies that are being produced by a President who is not only artificial but hate fuelled. My belief as a fan of documentaries is that this genre will only gain in popularity, with the coming years being a boon as well as revealing the importance of truth in the media as well as the importance of researching decisions made by the electorate. It is no surprise that the rise in fake news, Donald Trump, racism and may other hate fuelled elements has been answered by artists creating documentaries that prove there can be positive outcomes when people choose to buck the system as well as believing in others, differences, freedom and most of all, love.

This new documentary “Jane” follows Jane Goodall, a young and untrained woman, challenges the male dominated scientific consensus of her time with her chimpanzee research and revolutionizes people’s understanding of the natural world.

There is no doubt that the central charter in “Jane” is Jane Goodall who drives the narrative as well as the plot of this new film, she is the star and after fifty years has told her story a thousand times but it seems refreshing every time you hear it. Goodall at eighty four seems to be in the prime of her life moving past just studying, protecting and honoring animals but more recently attempting to educate the public on a myriad of issues effecting the planet as a whole. The narrative of “Jane” is built around the newly discovered early footage of Goodall and her apes, as well as her family with her own new narration explaining her own internalised thoughts of the time, coupled with answers to questions put to her in the present. It paints the picture of a woman who knew what she wanted even if she did not know the path to get there but stumbled through her life making decisions, discoveries and friendships that would help create the life she wanted. There are two other important people in this film, one being Jane’s ex-husband (now deceased), Hugo Arndt Rodolf van Lawick, who filmed almost all the footage seen in the documentary and their son Hugo Eric Louis (referred to as ‘Grub’) seen as a young boy, both of these people support Jane in life and in the film. With these three people we see a humanising of Goodall as a person who made some tough decisions to get where she is today, possibly losing her husband and son. What is interesting is that both the men in her life were equally driven in their own lives, with her then husband going on to become one of the greatest nature photographers who ever lived as well as her son who ended up making Africa his home who lives there now. Watching the three of these family members is the central point and narrative arc of this movie that makes it worth watching, as well as illustrating onscreen how lives lived apart can still compliment each other in very real ways altering the very fabric of the world which is a welcome reminder in 2018 when so many people feel so powerless.

Many people who only have a passing awareness of Jane Goddall will (or should) know about her relationship with animals, especially apes, more specifically in the Gombe Stream National Park, in Tanzania where she made her breakthrough studies and observations that catapulted her to fame with the footage shot by her National Geographic photographer (later her ex-husband). The footage shows Goodall in the wild, although some of film is used to describe times that were not actually filmed which becomes obvious when Goodall explains how and why a cameraman was assigned to her. In fact there is no footage that exists of her first trip to Gombe or her actual discoveries that ended up paving the way for her life. What we see is the footage shot later as well the problems she faced with her techniques which we see fail, then we see improvements which assist her in her observations which are revelatory especially when she comments on them in her interview within the film.

It can be difficult for people to look back on their own lives and see mistakes that they have made or decisions that have left them in a very different place to where they could have ended up, that is, the road not taken. In “Jane” we see her mistakes, the tragedies as well as the triumphs in particular with the apes then with her own family. It is not difficult for a viewer to see Jane and her husband not willing to give ground on their own work which is extremely detrimental to their relationship, ultimately their marriage which of course impacts on ‘Grub’. In fact their son decided to spend his life in another country away from Jane, it is not talked about but it is not a stretch to think there were breakdowns in their relationship. Of course there was an upside for Jane in terms of her driven persona, that was that she became famous as well as a spokesperson for animals and other wildlife everywhere which is incalculable in its payoff, can you think of a world without her?

“Jane” has been expertly directed by Brett Morgen who has been directing within this genre since 1996, he has a signature as well as the ability to expertly take relevant footage from archives making salient points about real people while intercutting within the present which is exactly what happens within this film. Morgen has directed at least three great documentaries, “On the Ropes”  (1999),  “The Kid Stays in the Picture” (2002) and “Kurt Cobain: Montage of Heck” (2015). With “Jane” however he has woven a plot around a ready-made narrative that is his perfect documentary that not only says something but also shines a light on a person on the twilight of her years. Not only that there have been many specials and documentaries made about Goodall but this is the only one to see, it encompasses her past fifty years but keeps an eye on not only her future but ours as well.

This is a great documentary among great documentaries, which deserves to be seen, not only that it is worth purchasing, giving as a gift and showing people when they visit. I have seen many documentaries but this one was about many things that touched me and it is worth revisiting to see how one person who makes sacrifices can make real differences in peoples lives, probably beyond her own, something rare and special indeed. 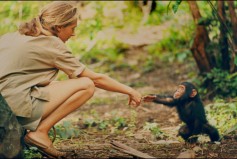 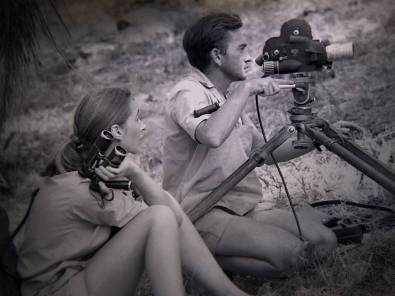 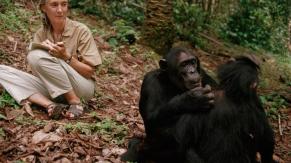