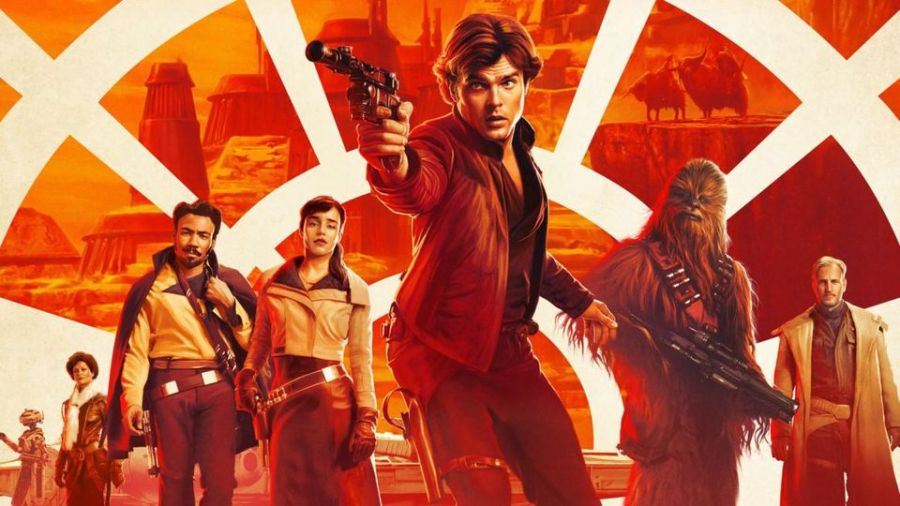 Han Solo: “I heard a story about you. I was wondering if it’s true.”

Lando Calrissian: “Everything you’ve heard about me is true.”

Was anyone really wanting a Han Solo origin story? Had Disney and Lucasfilm’s run out of ideas so quickly that this was their second non-episode movie out of the gates? Not only that but with all the behind the scenes shenanigans that took place would this even be executed very well – expectations were set pretty low for me on this one. The producers had begun by making a decision that at this point for any blockbuster is de rigueur, that is assembling a relatively unknown (and cheap) main actor (Alden Ehrenreich) then surrounding him/her with a bunch of well-known character actors or lead actors slumming it, as well as taking a large pay check, which explains the presence of Woody Harrelson, Emilia Clarke, Donald Glover, Thandie Newton and Paul Bettany. As has been the case with the previous ‘Star Wars’ spinoff you hire an up and coming writer or director, let them do their work, then fire them for not making a movie you like, hence the original directors Lord & Miller were replaced with a safe middle of the road director like Ron Howard, who knows how to follow a mandate. What remains to be seen is if “Solo: A Star Wars Story” (2018) is really a worthy entry into ‘Star Wars’ lore or will it fall short with a simple story, routine characters, or will it be fondly remembered in the long term. Unfortunately with expectations so low it could manage to be seen as a victory that may please fans after the negative reaction that fans (not critics) had with the what I think is the excellent “Star Wars: The Last Jedi” (2017). What I found was that I enjoyed the experience of watching the movie but it had no real impact once the credits started to roll, judging from the reaction in the sparsely populated screening I attended the feeling was a common one.

The one thing that Ron Howard as director knows how to do is direct a script, place a camera, deal with actors as well as studios and to bring a coherent story to the screen. However, the one thing Howard has never had to do is to deal with a studio like Lucasfilm, operate with the budget here, in excess of US$200 million or to rescue a perceived troubled production. To be fair Howard had a lot going for him, some supportive producer’s as well as a mostly extremely experienced cast, that he bolstered by adding Paul Bettany as well as a crew that had seen it all before he arrived. What he has put onscreen is as you would have expected some great CGI sequences as well as some humour, which he knows very well and has let his stars shine in a movie that is all about bravado and one of ‘Star Wars’ best loved characters who here is not the brave General from the past three movies but more of the braggard from the first movie that audiences have loved over the past forty years.

The movie is centred on Han Solo who finds adventure when he joins a gang of galactic smugglers, including a 196-year-old Wookie named Chewbacca. Indebted to the gangster Dryden Vos, the crew devises a daring plan to travel to the mining planet Kessel to steal a batch of valuable coaxium. In need of a fast ship, Solo meets Lando Calrissian, the suave owner of the perfect vessel for the dangerous mission — the Millennium Falcon.

The star of this movie is in the title, anyone who was going to try and play Han Solo, filling the shoes of legendary superstar Harrison Ford was not only going to have a big job on their hands but was going to have to face the wrath of all the fans who would be judging him from the first stills that were published last year. It has fallen to relative newcomer Alden Ehrenreich to play Solo, who for the most past does a passable if not admirable job, which is saying something as there had been some early negative reports about his performance from the set. The supporting cast is absolutely filled with some terrific actors who all give their usual high standard of performance, they include Woody Harrelson, Thandie Newton and Paul Bettany, all playing tropes you will recognise from hundreds of other science fiction movies not forgetting any number of characters from the ‘Star Wars’ universe. As for the new blood of actors that have been cast including Emilia Clarke, Donald Glover and Phoebe Waller-Bridgewho all contribute something special in a movie that could have seen them marginalised in a variety of ways it is Glover who really shines stealing the movie from all involved. Donald Glover playing Lando Calrissian is all about performance of a character that has only been hinted at and seen very little in the canon, here we see Lando as a young man who is all about legend and action, if there is going to be one character from this movie that should be seen in a stand-alone it is Lando being played by Glover whose status as a performer is only getting bigger. Then there is the voice of Phoebe Waller-Bridge who has become famous for her excellent series “Fleabag” (2016 – present) here does an Alan Tyduk playing a robot with all the right moves as well as all the right lines, something that has been expected in a ‘Star Wars’ movie for the past few years.

This is, in the end a very safe bet, there is nothing offensive in its execution, it has no teeth or makes no real leaps from any other similar movie, which is a shame as it could have been so much more. There are no real narrative surprises at all, no real surprise reveals, in fact as the narrative rolls on you can guess what is going to happen next, almost everything is covered off in the first half of the movie. I actually struggle to see the point of a movie like this other than making a lot of money, which is fine as thats what studios are supposed to do. However in the long run do movies like this hurt the brand of the ‘Star Wars’ brand? I think they do, I was only drawn to this to do a review, I think I will be giving the next spinoff a miss only because they lack any real narrative surprise or bite.

As with all major blockbusters as well as ‘Star Wars’ movies there is a reliance (some may say over reliance) on special effects that seem to up that stakes from movie to movie. “Solo: A Star Wars Story” is no different with not only some great set pieces but the time and money needed to pull these off has been dedicated to them and they look simply amazing especially for a movie that is essentially a spin off from the main run of movies. My only concern is that the next few spin off movies will attempt to increase the CGI stakes, it might be a nice break to have a character driven story instead of one driven by special effects.

There really is nothing negative about this movie, it is a run of the mill origin sotory something we can expect more of as the years go by and Disney/Lucasfilm want to release a ‘Star Wars’ movie each year, we can probably expect to see a drop off in quality as well as more issues behind the scenes as filmmakers attempt to make something different while the producers want to make more of the same vanilla type movie. It actually does not matter what anyone says about this movie, it is going to have a huge opening weekend, and go on to make around US$1 billion dollars worldwide, giving licence to Disney to make more of these movies. The only thing stopping the money making machine will be the time of year it is being released at, this is the first ‘Star Wars’ Summer movie release so there is definitely more competition, this will be a true test of the brand in terms of other blockbusters, this will be an interesting time indeed.

“Solo: A Star Wars Story” was shot at 3.4K and 6.5K with Arri Alexa cameras and given a native 4K digital intermediate, though the home release lacks Dolby Vision. I have nothing bad to say about the image at all. It looks superb throughout, and on an OLED the vast number of HDR highlights pop off the screen. Even when there is a full field of snow, the brightness isn’t too high  so it won’t blind you. As far as the image goes, I’ve got nothing but great things to say about Solo.

There is good use of the Atmos channels for scenes, action scenes pan around you, and vocals are clear, but the impact is lacking. 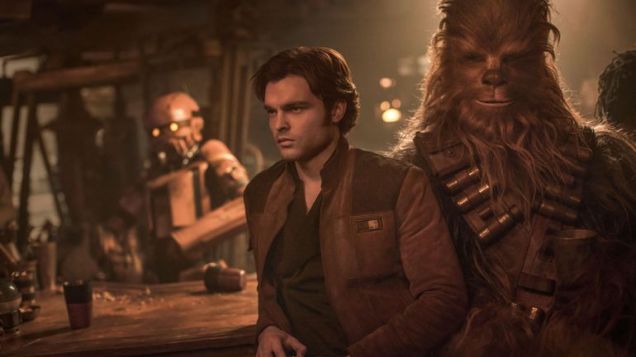