Dawsey Adams: [narrating, in a letter] “Our Friday night book club became a refuge to us. A private freedom to feel the world growing darker all around you, but you only need a candle to see new worlds unfold. That is what we found in our society.”

The past few years has seen the production of many British films that are based around events that occurred during World War II, in particular the time during the war or, most importantly, just after. These movies all tend to try to reflect the effects war had on everyday people as well as their lives, including the surroundings, reflecting their own great stress, loss, as well as their ability to face these hardships with bravery, knowing that there would be a cost to bear from their experiences for years to come. Some of the more recent entries into the genre are “Darkest Hour” (2017), “Dunkirk” (2017), “Their Finest” (2016), “Unbroken” (2014) and “The Monuments Men” (2014) to name a few, there are even more foreign versions of these which means that these stories are not only alive and well but are also winning awards as well as making money at the box office. Now comes the latest entry with the Mike Newell directed “The Guernsey Literary and Potato Peel Pie Society” (2018) which tells the personal story as well as the cost of Nazi occupation on the British Island of Guernsey as well as the story of all those involved in the founding of said Society combined with a writer who was striving to tell their story bringing it to the attention of the public. However the main difference within the narrative is that the protagonist of the story is a woman who is also an author that is searching for some truth about not only her life but the reason for the existence of others, it is also a mix of comedy, drama and thriller that holds itself together through a very personal as well as tragic story.

This movie tackles so many issues of life during World War II it is hard to know where to begin. The stress that Londoners lived with from day to day is one of the elements of the film that is dealt with, some pretty heavy emotions for a movie that deals with the a form of show business. All of the characters within this movie have to deal with reality that they, their friends or families may not be around after a night of shelling by the Nazis, it is frightening and becomes all too real for each and every character within this film – I warn you now there will tears. The wartime aspects of Guernsey could have explored a little more although Newell does fit in some of the tropes of a wartime movie such as the collaborator, the love story between German and Englishwoman and a few others audiences should recognise but he does so in a very natural way.

Five years later, in January 1946, author Juliet Ashton is promoting her latest book, written under her pen name Izzy Bickerstaff. She has just been contracted, through her publisher, Sidney Stark, to write stories for The Times Literary Supplement about the benefits of literature. Juliet receives a letter from Dawsey Adams, a man from Guernsey who has come into possession of her copy of Essays of Elia and who wants to know about where to find a bookshop in England to buy another book by the same author, Charles Lamb. He tells her that he is part of “The Guernsey Literary and Potato Peel Pie Society”, which meets each Friday night. Juliet sends another book by Lamb and his sister, Tales from Shakespeare in exchange for more information about the society and how it came into being.

This movie has a very strong lead in actress Lilly James who over the past few years has grown as well as improved as a force onscreen, really coming into her own in a supporting role in the Oscar wining “Darkest Hour” (2017) which was a vast improvement over her (I thought) miscasting in “Baby Driver” (2017). In this latest role, which may on the surface seem like an easy part, she must develop a character that is looking forward to a new life post war but is haunted by the past as she must attempt to make sense of the events of her war experience through the lives of others. Collins has a challenge in acting opposite some new talent as well as some very experience character actors who know their jobs inside and out. It would be easy to relax with such an array of talent but she is not once out acted or have any scenes stolen from her central performance. Speaking of the rest of the cast this is a great one indeed led by the always-affable Matthew Goode who really does give insight into a part that could have been just another character but he gives it the depth it deserves. On the Guernsey side the stand out’s for me are the veteran’s in Penelope Wilton, Katherine Parkinson and Tom Courtenay who carry much of the emotional heft as the people that have not only suffered but also offer some of the much needed humour. The rest of the cast is rounded out with the newer Michiel Huisman and Jessica Brown Findlay who both offer unique views of the war and post war Guernsey that is vital for the story to be told in a way that the audience will relate to, they are both excellent in knowing how to adjust their performances.

The movie has been directed by journeyman Mike Newell who has had his share of successes, he seems to be at his best when he cares about what he is doing, here there is no doubt of that, his tenderness and thoughtfulness comes across from the outset and continues through to the conclusion which is almost heartbreaking. There have been three writers working on this movie, which it has to be said does show, an astute viewer may be able to see the cracks where the narrative does not quite marry up, teetering on coming apart but is saved with some astute editing. It is possible that there is too much plot for the running time, which is where it is weakest, but they have to remain as the narrative is structured in such a way that they are reliant on each other.

“The Guernsey Literary and Potato Peel Pie Society” operates on a number of different levels, it is a drama as well as having comedic aspects much like many British films that fall within this genre. It is also a movie about war, how people cope as well as do not cope with being forced to deal with the possibility of death of oneself, friends or family at any time for no better reason that saying the wrong thing or being in the wrong place. It is also about how under great stress people get on with their lives making plans, falling in love, having families with the hope that things will get better. Finally it offers a small look into what bravery looks like as well as what the cost of the bravery could be even though it may lead to very real loss.

It has to be said that this is a very charming movie that really stuck with me long after the credits rolled, it was enjoyable and is for almost anyone that likes unique fictional stories that could almost be true which speaks to the film making which is very good. I would say that like many recent British historical movies this should be added to any collection as it definitely can be viewed more than once.

“The Guernsey Literary and Potato Peel Pie Society” is out now on DVD & Blu-ray. 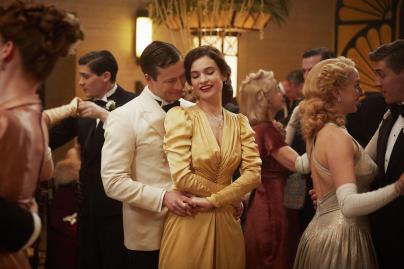