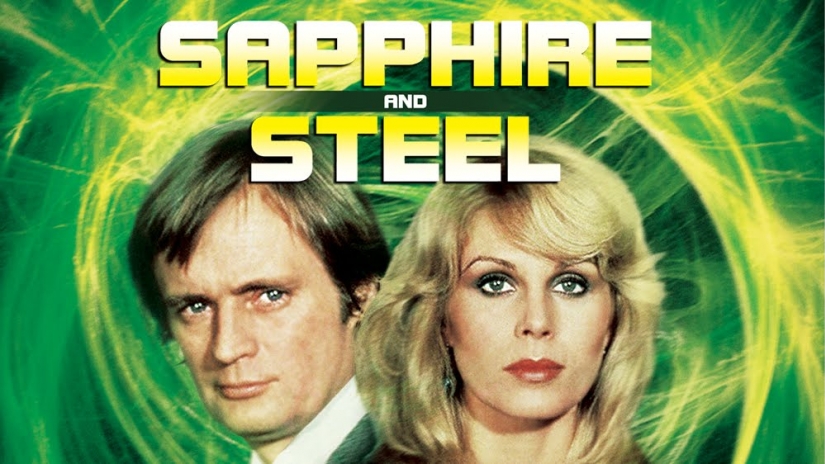 Narrator: “All irregularities will be handled by the forces controlling each dimension. Transuranic heavy elements may not be used where there is life. Medium atomic weights are available: Gold, Lead, Copper, Jet, Diamond, Radium, Sapphire, Silver and Steel. Sapphire and Steel have been assigned.”

There really is something very special about British science fiction television series of any age really, but the period of the 1970s through to the mid 1980s saw some of not only the most iconic or greatest shows but also some of the most unfathomable, in particular the series “Sapphire and Steel” (1979 – 1982) which has been released on DVD for at least the third time still shows no sign of aging. In fact it seems to be a smart more aloof diversion to more popular serials of the day such as the juggernaut that was “Doctor Who” (1963-present), the most obvious series to compare it to. When viewing the series the show was more Nigel Kneale’s ‘Quatermass’ than the aforementioned ‘Dotor Who’ as it asked the viewer to invest some of their own sci-fi expertise to fully internalise what was going on with the lead characters, which for someone young was baffeling. Over the intervening years I have gron to love the series with its existentialist narrative as well as the very little known backgrounds of its titular chaarters, there was even a question around whether they were heroes or villians. Of course the figuring out was part of the fun, as it remains to this very day, it helps the show that David McCallum and Joanna Lumley portrayed the leads that then and now are absolutely fascinating in their portrayal as well as their endless charisma that informs their roles.

The series itself centered on a pair of interdimensional operatives, the titular ‘Sapphire and Steel’. There is not much revealed about their actual purpose or backgrounds in the course of the series but they appear to be engaged in guarding the continuing flow of time. They are two of several elements that assume human form and are sent to investigate strange events; others include Lead, who takes the aspect of a jovial, friendly giant, and Silver, a technician who can melt metals in his hands.

In the series, it is explained that Time is like a progressing corridor that surrounds everything, but there are weak spots where Time – implied to be a malignant force – can break into the present and take things. There are also creatures from the beginnings and ends of time that roam the corridor looking for the same weak spots to break through.

These breaks are most often triggered by the presence of something old in a modern situation, for example a traditional nursery rhyme, an old photograph, or a house decorated with antiques. Holding onto something of the past opposes progress and allows ‘Time’ to break into the present – the more old things present, the easier it is for this to occur (such as is seen in episode 1 where the house is full of antiques in which a traditional nursery rhyme is read). When this breaking-in of ‘Time’ occurs, Investigators will be sent to assess the situation and then, if intervention is warranted, Operators are assigned to deal with the problem by a mysterious unseen authority, to be assisted by Specialists if necessary.

What made “Sapphire and Steel” so special was the top notch writing, production as well as the acting that combined to make an incredibly restrained yet knife-edged and electric atmosphere that was readily apparent whenever an episode is viewed, this atmosphere remains one of the prime constants of the entire series

Written by Peter J. Hammond as well as featured writers Don Houghton and Antony Read took very familiar ghost stories, emphasising atmosphere and as such favouring patient, delectable build-up that drew out the tension masterfully. This is coupled with the use of small, intimate groups of characters often confined to tight, boxed-in locations like railway stations and lost & found stores to ramp up the feeling of claustrophobia.

The fact that so little is made explicit in the show helps drive the feeling of being beset by abstract, incomprehensible forces that seem to skirt reality in ways many lessor shows attempt to do now but rarely succeed in the ways “Sapphire & Steel” did for surely too short a time which is the real shame of the series.

To be fair along with the great writing and the amazing production as well as the attention to detail would be for nothing without the genius casting in the leads with Joanna Lumley and David McCallum. The cool detachment and aloof natures of the agents reinforce the sense that events are beyond the humans both in the series and viewing it. Yet, when on the rare occasions that these calm, measured performances are broken this only serves to heighten the importance and tension of the proceedings.

The fact that this series works at all almost forty years later is a mark of the quality of it as well as the daring that existed in its creation. With so many science fiction properties caught up in the never-ending explanations or deep background narratives that exist it is a treat as well as a promise of quality that there never needed to be explanations which goes to the existence of life itself within a time narrative. As with a narrative device such as time there is a concentration on the importance of artifacts, much like in our daily lives where as we age there is am importance on old photos, or items that relatives and friends have either owned or given us that have the power to make us reminisce – something that is powerful in the way we as humans think and operate in our day to day lives. Imagine if these items had real power to literally physically break into the present, there would be nothing more powerful, now imagine if that breaking in had the effect of being destructive; this is what the series is about. Taking this one step further the power lies in asking a question that if there was a break in time, this would lead to being able to revisit older times with people long gone, who would not want this?

So this is the genius behind “Sapphire & Steel” which is out now on DVD, a show worth owning to view, then view again, it is that good as well as overlooked, possibly taken for granted.

Serial One: A happy family lives in an 18th-century house filled with clocks and antiques. One night, a nursery rhyme (“Ring a Ring o’ Roses”) read aloud to Helen, the little girl, triggers a time fracture that takes away her parents. As Rob, Helen’s older brother, tries to understand what has happened, two mysterious strangers appear, promising to fix things. Sapphire and Steel eventually gain Rob’s trust and work out a solution to the problem. Lead also arrives to provide assistance.

Serial Two: In an abandoned railway station, ghost hunter George Tully conducts an investigation. His solitary task is interrupted by the two interdimensional operators, who have an investigation of their own. A sinister, growing force known as the Darkness is feeding on the resentment of the dead, using as a focus Private Sam Pearce, the apparition of a World War I soldier shot and killed eleven minutes after the armistice had been signed at the eleventh hour of the eleventh day of the eleventh month in 1918. The Darkness ‘recruits’ other resentful shades from the past who also died ‘unfairly’ as a result of a coming or completed conflict — such as the crew of an experimental submarine whose air-pumps failed, and a World War II bomber pilot killed in a crash just one flight away from being demobbed. It is up to Sapphire and Steel to decide if the life of one living human is worth the price of the danger presented to Reality.

Serial Three: Rothwyn and Eldred, a couple living in a modern apartment, are not what they seem. In fact, they are from the 35th Century, the apartment is their time capsule, which is situated on the roof of a modern day tower block, and the experiment is to live as 20th Century humans. But trouble starts when the couple discover that they can neither contact their controllers in the future nor two other similar time capsules in the present day. The biomechanical system that runs the capsule has experiments of its own that it plans to perform on the occupants – resenting the fact that in the 35th century, Mankind is the only animal not extinct; all other creatures, flora, fauna and even germs having been ruthlessly eradicated in order to preserve the purity of the human race. This time, Sapphire and Steel have help in the form of Silver, an interdimensional technician.

Serial Four: Phantom children with sepia-toned skin play in an almost deserted apartment building. Both the landlord and a tenant have mysteriously disappeared. A man without a face appears on the stairs. Something has emerged from a photograph; something which has appeared in every photograph ever taken anywhere in the world and is powerful enough to turn Sapphire and Steel into literal two-dimensional versions of themselves.

Serial 5: Dressing up and pretending that it was once again the 1930s seemed to be a novel idea for a dinner party hosted by Lord Mullrine, a wealthy industrialist, at his country mansion to celebrate fifty years since his company was founded with the late Dr. George McDee. Mullrine has even gone so far as to have every room in the house, with the exception of his office, put back to its original style. Then, strange things start to happen: McDee himself turns up at the party along with other anachronisms, and then, one by one, the guests begin to be murdered – their bodies vanishing shortly afterwards. Secrets and lies involving McDee from fifty years before are resurfacing, Time is trying to rewrite history, and the only ones who can stop it are two uninvited guests — Sapphire and Steel.

Serial 6: The scene for Sapphire and Steel’s latest investigation is an abandoned roadside café where time has stopped. However, they find that Silver has arrived before them – which is against normal procedure. The interdimensional operatives remain uncertain as to exactly what they are supposed to be investigating. The key may lie in two humans in the café who claim to be from 1948. 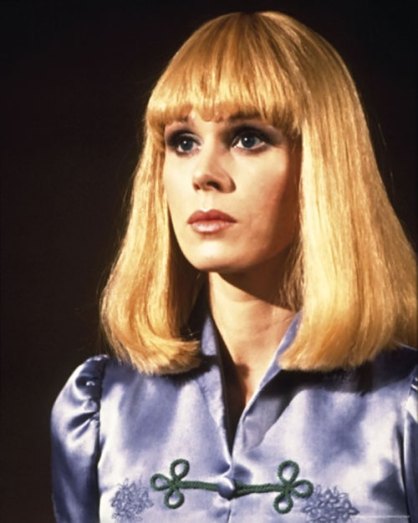 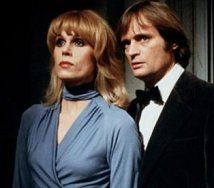 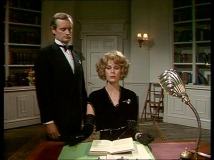 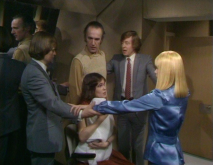 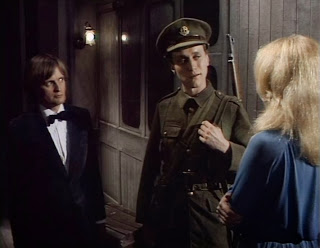