James Halliday: “Hello, if you’re watching this, I’m dead. I created a hidden object, an Easter egg. The first person to find the egg will inherit half a trillion dollars and total control of The Oasis itself.”

I have to admit to being guilty of building this new Steven Spielberg film up in my mind particularly after the first trailer, with it nod to popular culture of the 1980s as well as its gamer sensibility, of course not forgetting its name which many young men first witnessed in that same time period. “Ready Player One” (2018) seems genuinely designed for those people that thought rebooting “Ghostbusters” (1986) as an all-female group was a bad idea, those middle class white morons who think that liking genre material is just for them, and if you are any different then look out – have a look at the hatred that was laid on Leslie Jones a few years ago. In fact, with Spielberg doing the rounds at the moment and his references to new media you might be forgiven for thinking that he might be one of those people. This is a movie full of white people (with some token minority sidekicks) with problems that will be foreign to most, it is set in the future built around some of those same characters Spielberg made famous and made him one of the richest and most successful filmmakers ever. This film is a love letter to that audience that think their childhoods are sacrosanct and should remain how they remember them – so this isn’t really that original, not only that it is homogenized. Also, it is following one of the most successful films ever in the genre breaking culture smashing “Black Panther” (2018) – to me “Ready Player One” does not just look out of place but even with all the special effects and IP just looks white and tired.

There is no doubt that this film is being sold on one word, that is ‘sentimentality’, while that in itself is not a bad thing, it can be when that it is used as a way to misremember the past or brush over the negative aspects of it – which of course there are, we do not live in a perfect world, we certainly don’t love in a fictionalized one. There is no doubt that this movie is a lot of fun, it has big screen action that only someone like Spielberg can deliver, it is based on a best-selling novel that seems to have been created with this movie in mind, it offers so much that after a while it becomes a little tedious – I get it, large corporations are bad, individuality is good – but really is this something that I haven’t heard before, I mean I studied it in school with “1984”, and even then it wasn’t an original thought. Ultimately while a lot of fun I could not help but think that the film is far less than the sum of its varied and colorful parts. Problems occur when there is such a broad story told without the real close up on individuals and their motivations for their own actions.

The film is set in 2045, much of Earth’s population centers have become slum-like cities due to overpopulation, pollution, corruption, and climate change. To escape their desolation, people engage in the virtual reality world of the OASIS (Ontologically Anthropocentric Sensory Immersive Simulation), where they can engage in numerous activities for work, education, and entertainment. Users have discovered hidden with OASIS “Anorak’s Quest”, a game created by the late James Halliday (Rylance), the creator of OASIS. The first to find the Easter Eggs with Anorak’s Quest is promised full ownership of OASIS among other gifts. This has attracted a number of Gunters (“egg hunters”) to play the game. Innovative Online Industries (IOI), the manufacturer of most virtual reality equipment, also seeks ownership of OASIS, and its CEO, Nolan Sorrento (Mendelsohn) has amassed an army of indentured players, known as Sixers (due to their six-digit identification), to seek the prize. However, to date, no one has been able to complete the first quest, finishing a vehicle race across an ever-shifting dangerous cityscape. From here sides are drawn and we are witness to the race for the golden ticket.

There is no doubt that the stars of this movie are the genre pieces that have been brought together under one roof as well as the involvement of super producer/director Steven Spielberg whose own oeuvre is noticeably absent – there are no Gremlins, velociraptors, evil trucks, ‘War of the World’ style aliens or even a Dr. Jones anywhere to be seen, in fact there are lots of Warner Brothers properties (although no DCEU or LOTR) and a bunch of Universal properties as well (although no Fast and Furious, Classic Monsters). It’s an odd thing to think of the world in thirty years with some major properties absent as well as no ‘Star Wars’, MCU or Pixar characters which seems like an obvious flaw – Disney for good reason didn’t want to lend out their IP.

For my mind I was struck by how reductive as well as fairly ho hum this film ends up being, I am actually at a loss as to why Spielberg even wanted to be part of it. His films lately have fallen flat to say the least, following on what should have been a slam dunk with “The BFG” (2016) disappointed not only at the box office but critics shunned it as well. Last year there was the project that should have been at least an Oscar contender, “The Post” (2017) was shunned in favor of newer more relevant films, now we have a big budget genre piece that while a younger Spielberg may have taken chances, the director now 72 seems to be showing his age, perhaps questioning relevance as well as seemingly second guessing himself with choices of projects. Even his next two movies, a remake of “West Side Story” (1964) and another Indiana Jones movie – in 2018 do we really deserve these two movies? While it’s true that there are few directors in Spielberg’s class, certainly there are few of any age that could get any movie they wanted greenlit. In saying that when Clint Eastwood was 72 he directed Oscar Winner and box office hit “Mystic River” (2003) and was about to direct Oscar Winner and box office hit “Million Dollar Baby” (2004), even now Eastwood at age 88 he is making more interesting choices as well as original movies than Spielberg has since the 1990s. A person closer to Spielberg’s age is Martin Scorsese whose own oeuvre is littered with odd choices although continues to make a huge impact in other ways, such as his excellent documentaries, and could you ever imagine Spielberg making a movie like the thematically rich period piece “Silence” (2016)?

It feels to me that having been so successful Mr. Spielberg seems lost in what he wants to make as well as the kind of films that he has left in him. His record is envious both as director and producer but his output recently has been not only questionable but his lack of not only his own self, but the changing culture he is living through leaves much to be desired. “Ready Player One” looks like a movie that itself is lost, it covers broad themes in ways a more juvenile director might push them, it has at its heart a white savior surrounded by sidekicks that smack of Short Round from one of his more mistake ridden and narratively flawed movies “Indiana Jones and the Temple of Doom” (1984). As I mentioned the idea that white people can solve the world’s problems is an idea from a much older generation, one that we see reflected in positions of power whether it be Trump, Weinstein or any right wing government going – I would have thought with Spielberg’s own background he would have known better – but this is a person that was a little cerebral than his other classmates, such as Coppola who while more maverick tackled issues far more complex than Spielberg ever has – he paid a price for his bravery, maybe it’s time for Spielberg to pay a price for his pop culture ideas.

The film itself takes far too long to get to its point as well as endlessly explain itself in at the beginning to set up the entire world as well as an ending that is narrated to a point that there can be no guessing as to what we are witnessing. In fact, the entire movie is filled with exposition, so much so that I almost though old Basil may turn up to give a half time lecture. The old adage is that cinemas is a visual medium, it may have been a better idea all round if this has been embraced.

The cast is young and has to carry much of the film, one of the only adult characters that is given any real time is Australian Ben Mendelsohn who seems to be asleep through most of the running time, he comes off like many of the adults as one note and paper thin. In fact the entire narrative is taken from Road Dahl’s ‘Charlie and the Chocolate Factory’, which has been made twice into movies, that contain more surprises and depth of character than this one. The explanation behind that is easy, the film is co-written by hack in the making Zak Penn who has never met a script he couldn’t dumb down and reduce to its basic elements, as well as being a franchise killer – we can thank him for “X-Men: The Last Stand” (2006).

This may have come off like bashing a movie but actually “Ready Player One” is an enjoyable romp if you don’t look too deep – the interplay between the characters is as you would expect very well executed. The world of the OASIS is rendered perfectly and the characters from different genres and times mix well together. The highlight of the film for was the section where the gang enter the world of Kubrick’s “The Shining” (1982) where things go wrong for all involved, as well as revealing one of the secrets that the gang are searching for. There are many moments like this, with throwbacks galore, like the high-tech world that most of the world lives in, which is juxtaposed by the fact that when searching for films videocassette covers are used – then they enter the relevant world through a cinema. Of course, as we are learning less and less people actually go the movies and video cassettes left us as a viable medium twenty years ago. One wonders if Kubrick would have appreciated the use of his movie in this way, lucky he never found out.

There is enough pop culture touchstones to keep anyone amused for the runtime of “Ready Player One”, even at almost two and half hours, I did find myself clockwatching a little, but it does crack along so there are few down times. This will not be your first run in with many of the properties in this movie and they are for the most part used well, my favorite was seeing the Iron Giant again, part Terminator and part Pinocchio he was a welcome return to cinemas, one I have been waiting for some time. It may have been more appropriate for an up and coming director to really bring some originality as well as zest to this, maybe Spielberg at this stage of his career should be reaching for the stars and not looking at tropes that have been around for some time and executed better, if you want to see how it should be done go and watch “The Matrix” (1999).

“Ready Player One” is out now on DVD & Blu-ray. 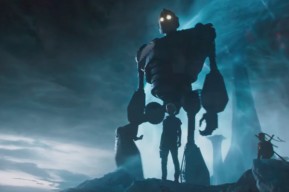 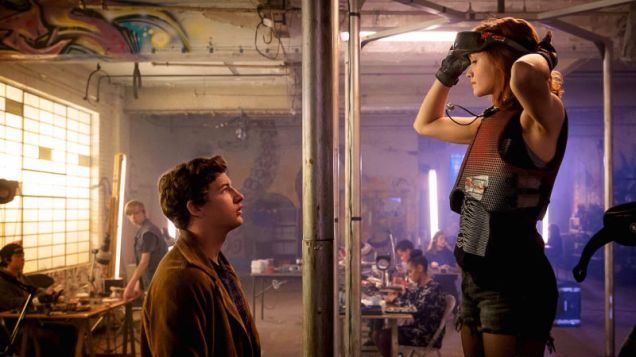