It may be difficult to believe but it has been over twenty years since the first Pixar full-length film was released, the always great and timeless “Toy Story” (1995). That movie ushered in not only the cutting edge computer animation but also featuring of A-list celebrity voice talent that Pixar would become famous for. “Toy Story” was also a new breed of film that would not talk down to children, taking for granted that the themes, that were sometime adult, or at least relatable to adults, would be understood by the young as well as the old. There have been some ups and downs over the years with the quality and success of Pixar’s output, but their foray into mining material outside of the US has been very successful with “Moana”(2016) set in the Pacific Islands, and now with their Mexican based “Coco”(2017) – which highlights some truly unique and wonderful aspects of Mexican culture.

In breaking new ground in terms of not only introducing many to the Mexican culture, Pixar has to be seen not to be exploiting another culture for pure profits, so bringing in veteran director Lee Unkrich seems like a no-brainer. Unkrich who shepherded Pixar’s first sequel, “Toy Story 2” (1999), as well as the sequel that made it their only true franchise “Toy Story 3” (2010) is someone who is skilled enough to not only break a story, but to deal with a narrative that is layered, as well as morally complex at the same time making a film fun enough to be enjoyed by children. What is great is that Unkrich has been wise enough to being in an assistant in the form of writer Adrian Molina who lends not only credibility but the skill in advising on the Mexican culture – something Pixar should be applauded for which worked so well in “Moana” – which this film is easily as good as.

“Coco” is set in Mexico where her musician husband left Imelda Rivera and her daughter, Coco. She banned music in the family and opened a shoemaking family business. In the present, her great-great-grandson, Miguel, now lives with the elderly Coco and their family. He secretly dreams of becoming a musician like Ernesto de la Cruz, a popular actor and singer of Imelda’s generation. One day, Miguel inadvertently damages the photo of Imelda at the center of the family ofrenda and removes it, discovering that her husband (whose face is torn out) was holding Ernesto’s famous guitar.

Concluding that he is Ernesto’s descendant, Miguel leaves to enter a talent show for the Day of the Dead. He enters Ernesto’s mausoleum and steals his guitar to use in the show, but becomes invisible to everyone in the village plaza. However, he can see and be seen by his skeletal dead relatives who are visiting from the Land of the Dead for the holiday. Taking him there, they realize that Imelda cannot visit as Miguel removed her photo from the ofrenda. Discovering that he is cursed for stealing from the dead, Miguel must return to the Land of the Living before sunrise or he will become one of the dead.

There are so many places to look at when talking about “Coco”, the first being that this  film looks and sounds incredible – that’s saying something considering other Pixar output. Not only does it pop in terms of the ‘living’ side in Mexico with its brightness as well as the look of the people and their homes, it looks just fantastic especially for a brand new undiscovered new environment. However it is in the ‘death’ side of the film where the look not only becomes unique but is possibly the most colorful and fantastic elements ever witnessed in any animated film ever made. The way in which the afterlife is depicted with its nod to border controls, its bureaucracy with many rules that act against families, incongruous official loopholes that benefit nobody and many more elements that make fun of, as well as comment on border issues, it was only missing some bizarre wall that the hero could have found his way over (or under). There is also the familial element that shines through from the very beginning to the conclusion, that is the treatment of not only the elderly but of those people that have died, who should never be forgotten.

“Coco” is definitely about family as well as what it means to have family and what it also means to understand where family has come from, the idea of knowing who has come before you, how that shapes a person consciously or not. Miguel goes on a heroes journey becoming aware of where he has come from as well as why his own direct family behaves in certain dogmatic ways that make no sense to him – all he wants to do is  make his own choices not being trapped by others – his journey of discovery not only opens his mind but blasts open preconceptions about his way of like that have knock on effects for his entire community, as well as the country at large. What I found refreshing about this was that through respect of others Miguel is able to ask some basic questions that members of his family have never asked before – if they had have or even followed Miguel’s train of thought then maybe their lives would have been made better. These are basic tools that people could learn not only when they are young but when they get older as well, it might make for better communities if others were honest when asked questions by their relatives as well as others.

As with many works of art this film speaks on a variety of levels as well as numerous themes. The keeping of secrets that bind people to not only live their lives in shadows but to ask others to not live their lives is a major part of this. The other element is the harm that people do to others to keep their secrets or those that victimize others much like one character does in “Coco”. There is a definite correlation through to the scandal that is raging in the entertainment world now that started with Miramax and Harvey Weinstein where he victimized people through corruption and power relations. As you would expect the corrupter in Coco like Weinstein receives his comeuppance.

Like “Moana”, “Coco” makes use of voice talent from the region, so we have the excellent Benjamin Bratt and Gael García Bernal in the two adult lead roles not only playing memorable people but in the leads of a global reaching film highlighting their talents as actors as well as creating roles that are as original as anything going. They get to play characters that are multi faceted with motivations that feel real as well as behaving how real people behave given the earthly situations that they face in this film. One thing that recent Pixar films have been doing is breaking new talent in high profile movies, which is no more truer than here, where the main part of Miguel is played by newcomer Anthony Gonzalez who gives the character authentic agency in his search for the truth.

This is one of Pixar’s best films yet with a great cast as well as some themes revolving around family, friends, life, death and answering a call you may feel at a young age. It also asks us to question what is happening in our lives, the motivations of people as well as our own motivations. This is a lesson that could be learned from people in all walks of life especially those in power. “Coco” also not only asks us to look at a culture we may not know or understand, viewing it from the people of that culture’s perspective. It also does not make judgments about those people as well as not exploiting it or reducing it to stereotypes something others may not have been successful at. I recommend this highly to all especially those with families it might make you ask some questions of your own.

“Coco” is out now in cinemas. 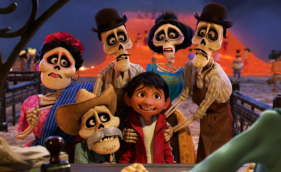