I am under no illusions as to the talent of Guillermo del Toro, that it is very real, I also know that he loves film, its history, and all that entails. If you have been lucky to hear any of his interviews or commentaries it is obvious when he speaks it is from not only a place of knowledge but of love as well. That love is not limited to his own creations or even his finished films but to all the actors and technicians he works with. It is well known how close he is to Ron Perlman as well as Doug Jones, but also to cinematographer Guillermo Navarro, he is also a lover of the horror and fantasy genre, as well as a fan of the great H.P. Lovecraft, it is no coincidence then that his latest film “The Shape of Water” (2017) is a mix of all these elements, as well as having a specific point of view, that is del Toro’s own, and maybe his most personal.

Its no secret that de Toro’s nadir was his 2006 foreign language film “Pan’s Labyrinth” (2006), nominated for six Oscars, winning three – pretty good for a foreign language fantasy film set during the war. It also appeared on many top ten lists for the year, as well as being a modest worldwide box office success. Since then though it has been a mixed bag, he has written/directed three more films that have disappointed at the box office as well as not being reviewed overly well. The problem is that everyone wants to like his movies, but he has been the victim of some bad luck with projects disappearing on him, the two biggest and most well known being his version of The Hobbit, and his dream project, an adaption of Lovecraft’s ‘At the Mountains of Madness’. Now I think he has directed his best film since “Pan’s Labyrinth”, in fact it might be his most accomplished project of his career, it couldn’t have come at a better time for him, the genre or the world.

The film is based around Elisa Esposito who was rendered mute by a neck injury she had sustained as an infant, and communicates using sign language. Living alone in an apartment above a movie theater, she works as a janitor at a secret government laboratory in Baltimore during the Cold War in the early 1960s. Her two closest friends are her next-door neighbor Giles, who is an artist and closeted gay man, and Zelda, an African-American co-worker who also serves as her interpreter at work.

The facility receives a creature in a tank, which has been captured from a South American river by Colonel Richard Strickland. Curious, Elisa discovers that the creature is a humanoid amphibian. She begins visiting the creature in secret and the two form a close bond.

One of the strengths of genre movies in general is that they can serve as metaphors for just about anything a writer or director wants to say, not only that, but it can act as a metaphor for whatever the audience wants to take from a genre movie as well. In that this new film from del Toro is a complete success, it not only tackles a variety of subjects and themes but there is enough ambiguity that it can mean a lot to a great many, as well as acting as a very good monster movie.

Of course one of the central elements of this film (that is a physical element) can be found in its title, that of water, which features heavily within the movie, as well as referring to many themes of the plot, it is a place of freedom as well as a prison for the two main characters. There are also allusions to the barriers that exist with water, that being land, which are always in opposition, something that we find as the movie moves forward, it is even referred to when we see a spy eating a meal, ‘Surf and Turf’. We also see many water receptacles within the movie from pots boiling water to a pool within a metal construction, both at points transparent so you can see what is contained within – not only that the eggs end up in the larger ‘pot’ with the creature – maybe we all end up in the same place whether an egg or a creature from a lagoon. Water acts as a medium for not only joy but sexual gratification, on the earliest scenes which is repeated is Elisa masturbating in her bath, later we see her make love to the creature in water, in fact in the very same tub.

There is also a theme of living a life of quiet desperation, which many of the characters within this movie are actively doing, living routine lives with little deviation as well as denying who they truly are. The main character of Elisa is stuck in a dead end job cleaning, looking after her gay neighbor Giles as well as listening to her friend at work Zelda – it is not until the monster enters her life that she not only sees a new way to live but to be free with something that sees her for what she is and not what she lacks. The same thing can be said of Giles who actually lives closeted from himself (and others) as well as the world until he realizes that he has someone who sees him for who he really is. The entire film is filled with these people who are being told to act one way but in fact their own true selves are in opposition to that very fact.

The fact that “The Shape of Water” (2017) takes place in the late early 1960s is of most importance as well as all the production design that is inherent in that time period. There are so many political as well as social aspects of the time that resonate within this film that are echoed in the lives we live today. This was a cold war period that imbued society with extreme paranoia as well as hatred and callousness for anyone that was different to dominant hegemonic forces that still exists for the most part today. The best example that takes place outside of the fantasy environment is when Giles is in his pie shop and is shunned because of his sexuality, at the same time an African American couple are told to leave – really is there any more blatant example of the behavior of a white man in the US in this time period (some would argue any time period). The entire movie is part homage to the Sci-Fi and Horror genres that permeated US movies in the 1950s and 1960s to the extent that del Toro really is standing on the shoulders of giants with this film, I am sure he would agree. One need not look to far past “The Creature from the Black Lagoon” (1954) to see just superficial similarities. We also see some technological affectations such as mass consumption, television as well with the kind of content that is being broadcast, the idea of media as well as the nascent mix of government and the military, the new science that would permeate our culture now, the power of film as well its firm place in US society, religion and so much more that as audiences we will unpack long after we leave the cinemas. This is a movie that demands to be seen more than once, there is so much going on that it is almost too much, but the ending pulls us through.

How great this film is, as well as how successful it is comes down to Del Toro as well as the cast he has assembled. This cast is led by the magical Sally Hawkins who as Elisa doesn’t utter a word but has so much to say to all those in her life, as well as finding a scene partner in Doug Jones’ creature who also offers no dialogue. One of the great things del Toro has done is to make Elisa mute and not deaf, which he may have been tempting, but it works so much better as it to is a metaphor for almost everyone in the film. Everyone in this movie is powerless to some extent so are as mute as the two main characters, the difference being that in the end they put their lack of voice into action that frees not only them but their friends as well – once you witness this it is a sight to see. The supporting cast is full of previous Oscar nominees Michael Shannon, Richard Jenkins as well as Oscar winner Octavia Spencer who all are so original in their parts nothing seems derivative even if you have seen similar charters previously, they are worth watching just for their own moments no matter how brief.

This is Guillermo del Toro’s most accomplished film yet, it is masterfully directed with a killer script as well as this he deploys all other aspects of his arsenal expertly, that is the art direction, costuming and most impressively the score by Alexandre Desplat that is sublime in its simplicity but lends to the narrative in ways that are not manipulative as well as almost being so light you may have been forgiven for not noticing it. One of the aspects of del Toro’s direction was the way he movies the camera, lots of fluid (that is not a pun) movements with low panning shots as well as push ins that feel like you are moving in a liquid, much like our prisoner – there is of course a lot of shots involving water which are persistent and in line with many of the themes and meanings of the film.

There is so much more to say about this film, it is the gift that keeps on giving, if you love genre films as well as love stories or just think del Toro is one of the best film makers around then this is for you. It says so much about us as human beings, how we treat each other as well as this planet the in short you should see this as soon as possible. There is another nice homage in the two movies playing in the cinemas below the apartments in which our heroes live – it is worth checking out.

“The Shape of Water” is released on the 18th January 2018 only in cinemas. 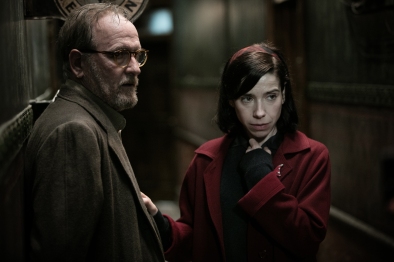