Eamon Bailey: “Knowing is good, but knowing everything is better.”

This should have been an excellent movie, it had so much going for it, a very good source novel in Dave Eggert’s work, as well as a director who has made some pretty decent low budget movies that involved relationships over action and thrills. In front of the camera to, there has been an absolute belter of a cast brought together led by the always charismatic Emma Watson, supported by superstar Tom Hanks, as well the late Bill Paxton and Glenne Headley – both in their final theatrical performances. But alas, in this case what we end up with is a well trodden story that plays like an updated version of Sydney Pollack’s version of the John Grisham thriller “The Firm” (1993), that featured Tom Cruise, once again with a massive star studded cast. “The Circle” is no where near as good, original or captivating as “The Firm”, which was a highlight of Grisham’s catalogue at the time, and remains so.

“The Circle” concerns Mae Holland (Emma Watson) who is an ordinary and unaccomplished young woman with an ill father. Through an influential college friend, she gets a customer relations job at powerful internet corporation The Circle, co-founded by Eamon Bailey and Tom Stenton. Mae quickly rises through company’s ranks, and is selected for an assignment with the Circle’s newest technology which she eagerly takes on. Soon she finds herself in a perilous situation concerning privacy, surveillance, and freedom. Mae comes to learn that her decisions and actions will determine the future of humanity.

This story deals with technology as well as social media may have been a better fit if the Charlie Brooker created “Black Mirror” (2011 – present) had not beaten this film to the punch, not only that, the television series used more originality as well as wit to illustrate what this film does, but in an extremely hap hazard as well as uninspiring way. This movie really attempts saying something about society in terms of social media, interconnectivity as well as technology in general – while that is something to applaud it is the generic plot as well as the vapid characters that let this movie down, and really make it a little embarrassing as well as completely unbelievable. Modern audiences need more to hang a plot on, as well as that there is no feel of consequence for anyone in this movie, not Mae and not the corporation nor their founder or employees who skate by with no real answers or jeopardy to really care.

There is no doubt that technology moves faster and faster with each new app, hardware device or social media plug in but to wrap all of these up into one maguffin, as well as portraying a company without an actual board of directors with a CEO and founder making all the plans by manipulating a customer services person into suggesting these plans for them to follow – is, well not only hard to follow, but also ignores the way companies actually work. This film defies the way actual technology works, as well as how these new products are actually introduced to consumers. This is a movie that sets itself as cutting edge but only really serves to see how much Hollywood is out of the loop as well as being entirely clueless to how this technology would work – it is no wonder they are facing losing consumers at the box office – this is certainly proof of a large segment of the creative population who are ‘out of the loop’.

The cast that has been assembled is excellent, I can only think they must have all thought they were getting involved in a completely different movie – certainly the plot must have gone somewhere more believable as I cannot think why someone like Tom Hanks or even Emma Watson would want to be involved with this mish mash of a movie – maybe they wanted to work together – but really they hardly even spend much time in the same room together.

On the other hand I can see the motivations behind some of the other actors being involved, especially if Hanks and Watson had already signed on to this project. The main supporting cast of Karen Gillan and John Boyega are canny choices not only from the production side but also from the actor’s point of view as well. Boyega and Gillan fresh of their sci-fi fantasy epics “Star Wars: The Force Awakens” (2015), “Guardians of the Galaxy “ (2014) respectively, probably felt the need to solidify their cinematic experience in roles that meant they could shine in support as well as gaining more Hollywood experience in a route drama/thriller with an A list cast. Unfortunately for everyone in the cast there is not enough actual believable human emotion or motivation to make any of these characters authentic or, for there to be anything for the audience to actually care about. There is some plot manipulation by having Mae’s father portrayed by Bill Paxton as having multiple sclerosis, this is meant to make us somehow identify with Mae but all I did was feel sorry for her parents by having such a shallow daughter. There are also points at which for no reasons characters appear, and then disappear for the rest of the film. The worst case of this is Karen Gillan’s character actually disappearing then towards the end of the movie we find out via a web chat she went back to Scotland – huh?

This movie is all about surface, there is nothing deeper than what you see as well as what is explained and explained again and again with exposition dumps from almost every character – in fact it is the only reason those characters exist in the first place, once they have their say they disappear with no real reason for them existing in the first place. Not only that but the person we are supposed to follow as well as identify with is shallow as well as being fairly unlikeable – are we really supposed to feel for her when she is doing work most young people are doing in the first place – she doesn’t like her job – boo hoo – welcome to life Mae.

This film really is all flash, there is not really much to recommend unless you enjoy sub par techno thrillers that would be an embarrassment if they had been made twenty years ago. If you want a techno thriller there are better ones to watch with more believable stakes, try “War Games” (1984), or even “Hackers” (1991) they are much better and while the technology and special effects are out of date, the stories are far supoerir and much more original.

In any case give this a miss.

“The Circle” may be released at theatres but maybe watch this on DVD or Blu-ray. 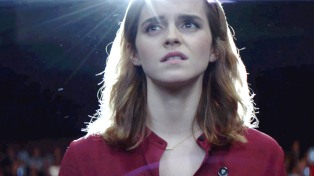 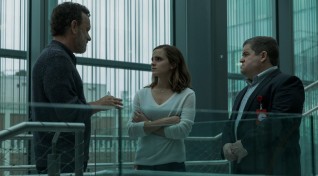 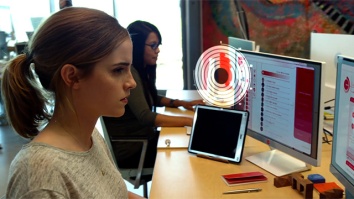