Sir Edmund Burton: “It started as a legend, one of the greatest of all… For a thousand years, we’ve kept it hidden, to protect Earth from what is expected to arrive…”

One thing about Michael Bay’s ‘Transformers” movies is that every single one of them boast an ‘A’ list cast, it seems that there is an endless queue of actors just waiting to be in this now five picture series. In “Transformers: The Last Knight” (2017) the latest big name actor to appear is the great Anthony Hopkins who chews scenery like the pro you would expect him to be – it is easy to see he knows exactly what kind of film this is – even if other members of the cast seem a little lost within this franchise. The question is now, after all these films that seem to be eerily similar, can there be anything more to see and experience from a new movie as well as is there a plot that can convince people to pony up the bills to not only go and see this movie but to take the family as well?

I am not a Michael Bay hater at all, in fact I probably like most of his movies, he is unashamedly a male movie director, caring little for anything else, I truly believe he loves movies wanting to make movies that he wants to see. Bay has the clout to pretty much do anything he would like, yet he has continually returned to the ‘Transformers’ Universe even though with each movie he says it will be his very last – something he has echoed in the last few days unsurprisingly. Why wouldn’t he return, the last four ‘Transformer’ movies have generated almost US$4 billion at the international box office – surely one of the biggest franchises in film history. These movies gave Shia LaBeouf, Josh Duhamel, Megan Fox, Tyrese Gibson careers, as well as solidifying Mark Wahlberg as a box office giant. They also created great over the top roles for character actors John Turturro, Jon Voight, Stanley Tucci, TJ Miller and Kelsey Grammer to name a few.

There is much to like with these movies, of course there is much to dismiss – one of these is the bloated running times, another is the action which at times can be hard to follow – something that harkens back to the first film and continues through to this fifth one.

This new Transformers movie is concerned with the absence of Optimus Prime and the war that has commenced between the Transformers Reaction Force (humans) and the Transformers. To save their world, Cade Yeager (Mark Wahlberg) forms an alliance with Bumblebee, an astronomer named Sir Edmond Burton (Anthony Hopkins), and an Oxford University professor named Viviane Wembley (Laura Haddock) to learn the secrets of why the Transformers keep coming back to Earth.

I am not going to get into plot details but needless to say Bay and his new team of screenwriters have attempted to keep the plot simple as much as they can, however I did feel myself start to get a little confused at one point with the myriad of characters as well as their motivations. There is a lot to the story that seems to contradict itself particularly in the last thirty to forty minutes. In terms of that if you are willing to let these elements go then you will be able to cope, however if plot is important to you then you probably shouldn’t be watching this movie.

There are a few reasons why I actually enjoy these movies; I am talking specifically about the Transformer films here, not overblown expensive and non-sensical blockbusters as a rule. I really like Optimus Prime as a characters as well as a hero, he leads a seemingly endless, while small number of characters, the highlight of them is always Bumblebee. Prime’s home, Cybertron, has been left broken (there have been a few reasons given) as a refugee from space he is really trying to fit in and do his best for his people among humans. The action and special effects are almost always excellent, although the way in which they have been directed have been uneven over the entire run of these movies, a problem that is getting solved a little better with this film especially. I found it was much easier to follow what was happening onscreen, this could have something to do with a lot more wider shots being incorporated by Bay and his special effects team. The other thing that I enjoy is that whilst they attempt to be broad in scope as well as onscreen, they are nothing more than the original cartoon version’s brought to life at cinemas, they are escapist where there is a good guy as well as a bad guy, one will win, one will lose. Of course Bay overly complicates this by having multiple good and bad guys with different (not really) motivations but in the end it is always sorted out – the good guys win and vanquish the baddies. Of course the issue always is where to go to next, Bay has an answer, as does his new cadre of writers – or so they would have us believe – but i saw nothing here that was really new enough to justify the running time let alone another movie but as long as audiences keep turning up at the cinemas, the will keep churning them out.

After saying all that there are still issues with the movies, it mostly for me boils down to plot as well as narrative choices that are made – as well as characters that are introduced, then dumped for no reason, then having choices made that seem to contradict motivations that have been set up either in the current story or previous films. More troubling, particularly with this current installment is the fact that the finale is not one, as we are given a pre-ending credits sequence that vainly attempts to set up another film, making me feel like I just sat through two and a half hours for nothing more than reinstating Prime’s home, Cybertron,  world as a macguffin for the number six.

As I have said there are any number of good actors that appear in these movies, the reason to have them is that they are the ones bringing the story to life, in this case the three standouts are Mark Wahlberg, Laura Haddock and the great Anthony Hopkins. These three main characters, when together onscreen, or just interacting with each other, really made this movie fun for me – even when the plot was way out of control or over the top. Wahlberg has turned into such a star that it is easy to forget he has made some pretty terrific films, just over the last year he has appeared in two legitimately great under seen films in “Patriots Day” (2016) as well as “Deepwater Horizon” (2016), both directed by Peter Berg. Here he carries a movie that could have dreadful but is saved by his expert ability to incorporate not only massive amounts of green screen acting but also bringing in two other actors to let them showcase their own skill. The highlight for me was Anthony Hopkins, brilliantly playing his age, acting against at times, green screens, other actors, a phone as well as giving great reaction shots – my favorite is him flipping people off during a high speed chase. Laura Haddock who almost plays like a Megan Fox lookalike comes into her own towards the end of the film, she could have been just another Bay babe, but has the chops to know what film she is in, and unlike previous versions of her character has much more experience in film to be treated too badly – I mean she seems to be playing her age – 31 – and has multiple degrees – so I think that is a step up from previous versions of this character.

Another thing that Bay has seemed to want to do is make some narrative sense out of the previous films, by not only upping the reason why Sam (Shia LeBeouf) was so important in the first three films – it involves his heritage and the great Witwicky name, but also bringing back John Turturro as some kind of Transformer legend expert – although he spends the entire film on a phone from Cuba – which was a little jarring – the entirety of this sub-sub-plot could have been removed easily with no harm to the plot – yes I used the word plot.

This is primarily an action movie with a sci-fi twist as well additions of humour, that is it – it is not a drama or a war film (although I think Bay may have grander things in mind). The best action films always move forward in terms of narrative, plot as well as the action itself – if it doesn’t do this it fails. One of the best action/sci-fi films that did this was James Cameron’s “Terminator” (1984), it was exposition heavy but when something was explained to the audience there were action set pieces taking place so we felt like it was perfectly natural – by the way it always lowers the running time of the movie, something Bay could take lessons from. What we have with these Transformer movies is action then explanation then more action – not only that it seems the action has nothing to do with the story, even with the massive ending, there are major holes of logic where the goal of the movie just keeps changing to encompass these huge CGI scenes, of really, after a while, is of  little interest.

It’s a real shame to see how this movie turns out; I thought there was going to be more meat on the bones, especially with Mark Wahlberg and Stanley Tucci returning to the movie – it seemed there was going to be a logical progression from number four, but this is put to rest in the opening scenes of Camelot (oh dear), with a particularly nasty bait and switch with Tucci, then an exposition heavy catch up on where we are in terms of the Transformers – by then I was more than a little confused as well as let down. The other element I disliked, which added to the confusion was the arbitrary way characters enter the story, disappear completely, then reappear, again for no real good reason. My feeling was that this was not a completed script with the special effects being planned before anything else – to me it feels like an Ed Wood film with hundreds of millions of dollars thrown at it. Look I have no problem knowing that people will go to this movie, but the question remains will enough people go to make a sequel worthwhile – who knows? There is some kind of Bumblebee movie planned for next year, but at this stage it may be too little too late for that character to have any impact on this behemoth of a franchise.

After all that I would actually say that this is an action movie that is PG, so all the family can enjoy it for what it is – a truly forgettable popcorn movie – it lacks the heart of Marvel films but also eschews the darkness of those terrible DC movies as well. It is more concerned with wowing an audience with CGI characters that are mostly fun but lack depth. This is the perfect example of a post-modern action film, there is nothing new to be added to a shallow legend, it has all been done before, but maybe thats the comfort of the Transformer movies. When I was a child I would have loved these movies, after all that is who they are aimed at. Just remember that it is two and a half hours long, so hang on in there for the very long haul.

“Transformers: The Last Knight” is out now only in cinemas. 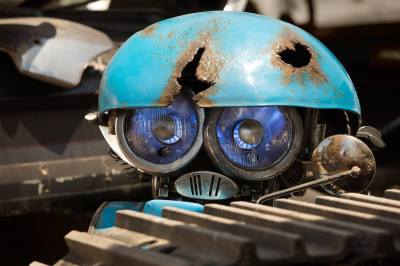