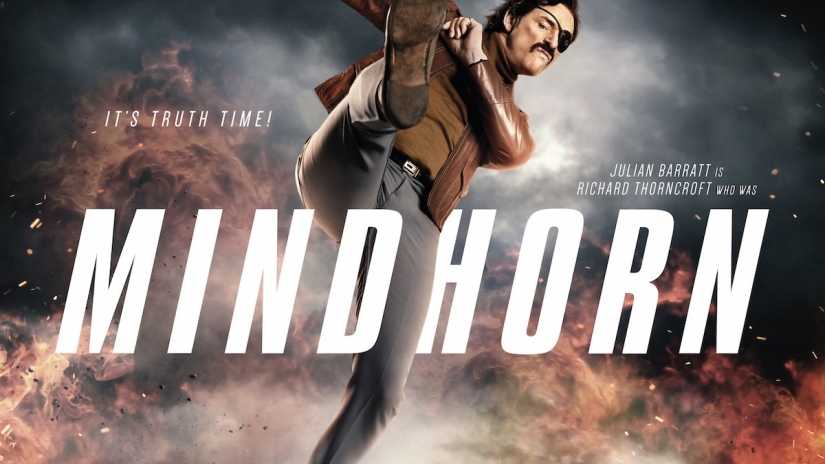 Currently in the UK there can be no more unique talent than comedian Julian Barrett, he was once a stand up, then joined forces with abstract artist Noel Fielding to create one of the true comedy greats of the new millennium with the surrealist “The Mighty Boosh” (2003 – 2007), a television comedy that made them, as well as the rest of the cast comedy greats. Not only that they were able to create two sepeate live shows as well as a documentary that illustrated their many talents. After a few movies and television shows Barrett has created “Mindhorn” (2017) as co-writer and star – be warned this is a comedy thriller with the thriller aspect being as important as the comedy part – something not all audiences will be impressed by – however I really enjoyed it, and the partnership with Simon Farnaby (co-writer as well as co-star) has paid off in ways that make the whole entirely greater than the sum of its parts.

The story opens in the 1980s, on the Isle of Man. Actor Richard Thorncroft (Julian Barratt) is preparing to film a scene in the television show Mindhorn. His relationships with his stuntman, Clive (Simon Farnaby), and co-star/lover Patricia Deville (Essie Davis) are established before a brief montage outlines the show’s concept, offers brief interviews with a number of people related with it and concludes showing Richard’s growing arrogance, culminating in an apparently drunken appearance on a television chat show in which he disparages his co-stars, is offensive about the Isle of Man and stumbles off a sofa before blithely declaring, “I’m off to Hollywood” and walking off.

Twenty-five years later on the Isle of Man, police are hunting for an escaped lunatic, Paul Melly (Russel Tovey) who they believe to be responsible for a young woman’s murder. He speaks to DC Baines (Andrea Riseborough) on the telephone, demands to be called ‘The Kestrel’ and says he will only speak to Detective Mindhorn, and that if he is not able to do so by four o’clock the following day, there will be further deaths. Chief Inspector Derek Newsome (David Schofield) – clearly not a fan of either the character or the actor who played him – begrudgingly he instructs his officers to ‘get Mindhorn’.

This is such an interesting movie, it follows Barratt’s decisions to make non conformist non comedies if you will, it seems he is attempting to distance himself from the Boosh as much as possible, I have to say that these decisions are inspired from Ben Wheatley’s trippy “A Field in England” (2010) to this comedy/thriller “Mindhorn” (2017). Barratt, here playing the Mindhorn of the title has to appear over two time periods as an actor who is extremely full of himself as well as having a contempt for everybody around him – sounds like any typical actor to me. Of course after the fall he will do absolutely anything to regain the B grade celebrity he once had, while exploiting anything and anyone he can to get what he wants.

As you would expect from any comedy from the UK the cast is just great with some very good choices, starting with Simon Farnaby (who also co-wrote the film with Barratt) as Thorncroft’s stunt double and love rival, who is just hilarious with his own failings and hidden secrets who now married to Patricia (Essie Davis), Richards old and spurned girlfriend. Davis to is great casting and has been seen in many UK based television shows after being very successful in her native Australia. The sometime antagonist of the movie, ‘The Kestrel’, played by the absolutely delightful Russell Tovey, who has been in many genre shows is here playing a deranged super fan, he once again shows that he is one of the great underrated actors in the UK at the moment having graduated from television is now a staple in very good English films, he alone is worth seeing in a very unusual role.

For one I really enjoyed this movie, and I mean a lot – it has some great sequences of comedy as well as action, which suited all of the characters down to the ground. The setting is amazing as well – I would struggle to think of any other location that could make fun of itself like The Isle of Man does in this movie. All of the locations are full of originality as well as the situations they are used in. One of my favorites is the ‘Jammer’ county club that Steve Coogan’s character has opened after his immense success with his own television show – something you can imagine a Partridge like character would do in another comedy – just priceless. In fact this movie takes time to set up most of the main characters in their homes which are very different according to their own personal success, there is a caravan, a stately home and the country club – a unique thing in this kind of comedy.

I would recommend this to all, I found it highly enjoyable, not only that, it fits right alongside any of Julian Barratt’s work whether it is him as an actor or writer. It has been so long since the Boosh produced anything I would take anything, and in fact the character of Thorncroft in some ways is as Boosh like as you can get. He is a man of huge ego with no idea how ridiculous he is. Not only that it could be seen as a play on the success Barratt had as Moon and has in some people eyes not re-captured (only the truly cruel or naive would say that) – the great line from Simon Callow (playing himself) about how much he loved seeing Thorncroft in whatever it was – then realizes that he was in a short lived television show may ring true to some.

Go watch now and have a laugh on Barrett.

“Mindhorn” is available to stream now. 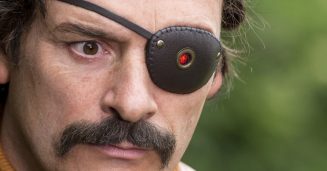 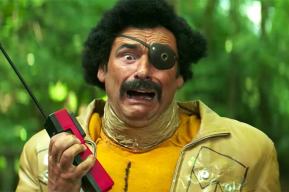