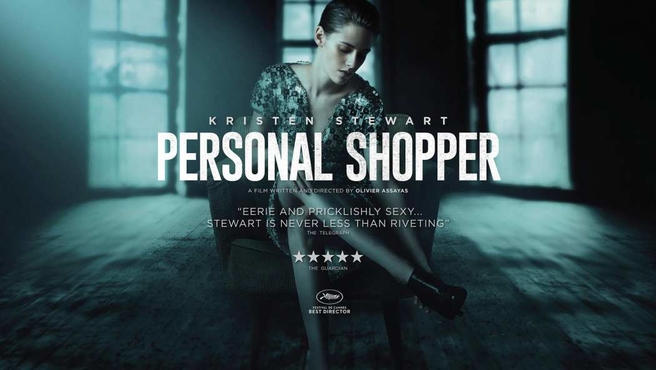 Maureen: “My twin brother, Louis, died here. It’s been 95 days. We made this oath. Whoever died first would send the other a sign.”

It has been five years since Kristen Stewart completed the teen vampire/ werewolf movies in the five film ‘Twilight’ series, adapted from Stephanie Meyer’s best selling books. It would be incorrect to say this was Stewart’s big break – that came in 2002 playing Jodie Fosters diabetic daughter in David Fincher’s “Panic Room”. From that 2002 film until 2008 when “Twilight” was released she had been making waves in mostly independent films. However, where she once was a young woman with acting talent, we are now witnessing the talent promised for so long in two of her better films, the 2014 “Clouds of Sils Maria” and the release this week in New Zealand of “Personal Shopper” (2016), both written and directed expertly by Frenchman Olivier Assayas.

“Personal Shopper” revolves around Maureen, a personal shopper, who serves wealthy clients in major cities, buying clothes and accessories, and taking care of mundane chores. She lives in Paris but travels to London and other cities for her employment. Her fraternal twin and brother has recently died; they both had a similar genetic heart problem, as well as this they both believed they had connections to the spirit world, her brother more than she.

Opening the film, Maureen stays over at her late brother’s house, hoping he will reach her beyond death. His significant other Lara wants to sell the house, and buyers want to know it is free of unhappy spirits. The film suggests what she sees and reacts to, including a series of knowing texts received even while she is on a train to and during her time in London, from “Unknown”. She believes she is in touch with ghosts.

This film really suits Stewart and what has become her signature acting style, as such she is suited for this role like no other at the same age. Stewart, at the age of only twenty-seven is amassing a nice oeuvre of work like no other, except for maybe Jennifer Lawrence – although the fact that Stewart has spread her wings well as working with many Europeans in Europe says a lot about the kind of actress she is choosing to become. In saying that Stewart does not have to chase a payday, as the residuals from the ‘Twilight’ films will keep her in the black for the rest of her life – which must be a nice luxury.

Stewart’s Maureen is a woman who is facing a crisis as well as something that has been stalking her for the entirety of her life, that is, the possible impending death of herself and/or her brother – this is a concept that most people from her economic and social background don’t face until much later in life. Stewart handles this with aplomb as her style and mannerisms suits this charater down to the ground. She seems to be relishing the opportunity to be working with a European like Assayas (again) as well as the subject matter of the two films she has made with him.

One of the great things about Stewart is her ability to play supporting parts to other actresses as well as her ability to not seem to have an ego for her on-sceeen personas. Assayas shoots Stewart in close up with these shots not being complementary as we see imperfections in her face as well as the age that she has seemed to gain through the stresses of her very existence. It is something to see an actress willing to give up her ‘look’, not to have makeup or to play a ‘real’ person that is not perfect looking. It is a juxtaposition between the glam pictures you may see of Stewart to this flawed, haunted as well as haunting person that is searching for some truth and perhaps closure.

Olivier Assayas has had a long career as well as being a force in French and International cinema for years, he has made a wide variety of films in multiple genres, he has to be one of the more prolific directors in the world today. He also enjoys partnerships with actors, hopefully this is the start of something with Stewart who he obviously enjoys working with – it must also help get a budget when you have a champion with such international clout and awareness.

There are many elements to this film that make it unique to the environment it has been released into, it co-opts many genres to give us twists on each one. I loved this movie, but it would be nothing without Stewart who is perhaps shaping to be the actress of her generation.