Deborah Lipstadt: “Now, some people are saying that the result of this trial will threaten free speech. I don’t accept that. I’m not attacking free speech. On the contrary, I’ve been defending it against someone who wanted to abuse it. Freedom of speech means you can say whatever you want. What you can’t do is lie and expect not to be held accountable for it. Not all opinions are equal. And some things happened, just like we say they do. Slavery happened, the Black Death happened. The Earth is round, the ice caps are melting, and Elvis is not alive.”

Films about the Jewish holocaust could be considered a staple of American cinema, you would think by now that any angle to approach them from would be exhausted. However one of the more fascinating aspects of the holocaust is the person that denies it ever happened. Then there are those people that are capable of making a living out of denying it ever happened. The first time heard about one of these people was in Errol Morris’ documentary “Mr. Death: The Rise and Fall of Fred A. Leuchter, Jr.” (1999), which is a great film that touches on some of the same subjects as “Denial” (2016).

“Denial”, centers on Deborah Lipstadt (Rachel Weisz) an American professor of Holocaust studies whose speaking engagement is disrupted by David Irving (Timothy Spall), a scholar of Nazi Germany. He files a libel lawsuit in the UK against her and her publisher for declaring him a Holocaust denier in her books. In the United Kingdom the burden of proof in a libel case is on the accused. Therefore, it was up to Lipstadt and her legal team, led by Anthony Julius (Andrew Scott) as lead solicitor and Richard Rampton (Tom Wilkinson) as lead barrister, to prove that Irving specifically knew he was lying in claiming that the Holocaust did not occur.

This is truly a fascinating film, I was not aware that this court case had taken place in our very recent history. Once the film starts you can see why the subject matter was so appealing to the director as well as the cast involved with this stellar piece of work.

It is no coincidence that the film has a real and legitimate feeling to it as its veteran director Mick Jackson, cut his teeth on documentaries before becoming a very successful Hollywood director. His biggest commercial success was the Kevin Costner/Whitney Houston starrer “The Bodyguard” (1992) which meant he had the pick of projects for the next ten years – he has worked in a wide variety of mediums and genres. After a ten year break he has returned with “Denial” what may be his best and most personal piece of film making to date.

As you would expect with a film that deals with some serious issues of truth and the type of prejudices that people have as well as the kinds of prejudices some people have to deal with it comes as no surprise that “Denial” boasts a truly stellar cast of veteran, established and new actors that help bring this story to life.

Leading the film is the Oscar winning Rachel Weisz who embodies her part, fully committing to the role of being persecuted by someone who is not up to her level of education, with no room for pity for her antagonist in the form of Timothy Spall who plays the very evil and very real David Irving. To Spall’s credit he never plays the character in an arch or unreal way, in fact he gives Irving much humanity, perhaps more than he deserves. The other highlights in the cast are Tom Wilkinson and Andrew Scott who portray the legal counsel that have to prove that Irving is a liar and incorrect about all his assertions, at the same time legitimising Lipstadt.

In many other years this film would have been a front runner at many of the awards ceremonies in 2016, it does fell like a throw back to film’s like “Inherit the Wind” (1960) or even “The Verdict” (1982) but for modern audiences it may seem tame compared to other dramas being shown and getting a lot of the acclaim in the past few years.

Leading into watching this film I was not sure what to expect, on the surface it looks and feels like it could be a television movie of the week. Instead once you start watching, it becomes completely obvious that this is indeed a special film where there has been meticulous attention paid to the characters as well as the storyline. I recommend this highly to people with an interest in a good story, great acting and attention to detail. 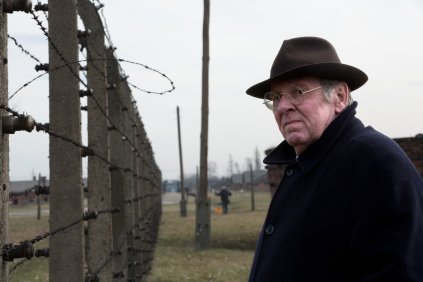