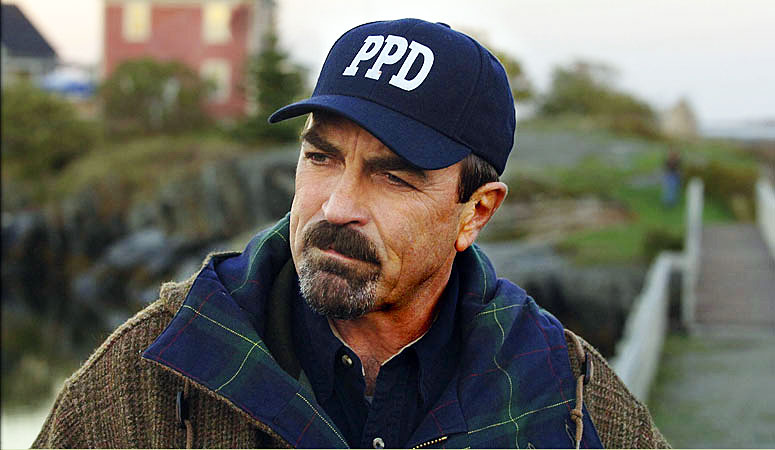 Created by: Robert B. Parker

Luther ‘Suitcase’ Simpson: “Is this official?”

Tom Selleck has had a pretty great career although you may not think that until you start looking at his filmography, he was catapulted to international stardom in the 1980s with his TV show “Magnum P.I.”(1980 – 1988), film roles followed and even now he is in the long-running “Blue Bloods” (2010 – present ). He is blessed with a great smile, a handsome face and the ability to play almost any kind of role. The ability to play deeply flawed characters was not something he was know widely for, until he started playing Jesse Stone in the TV movie adaptions of the characters created by the late author, Robert B. Parker. My personal opinion is that this is his greatest role, which very few people know about.

This is a character piece through and through and we find Jesse Stone, at about 35 years old. He is a former minor league baseball shortstop whose career was cut short by a shoulder injury. He was asked to resign from his job as a homicide detective for the LAPD Robbery-Homicide Division because of a drinking problem that began after his divorce from his wife, Jennifer. Showing up drunk to an interview for a job as police chief for the small town of Paradise, Massachusetts, Stone is hired because the corrupt president of the town board of selectmen thinks he will be easy to control. Stone quickly notices that the town has big league crimes, struggling with the mob, white supremacists, wildly errant wives and a triple homicide, and that his job will be more difficult than he expected. But, he proves up to the task, beginning with making a corruption case against the town council president and arresting him.

The series chronicles Stone’s cases as chief of the Paradise Police Department, as well as his struggles with alcohol and his complicated relationship with his ex-wife Jennifer. He is respected and well liked by the police officers in the town police department. He develops a good working relationship and friendship with the State Police Homicide Commander, Captain Healy.

No man is an Island – unless your name is Jesse Stone in which case it is entirely possible. After a career spent as a cop and reaching the homicide division it is a pretty hard fall going to a small town in the middle of nowhere – where the biggest crime might be speeding or theft. This is where Stone finds himself, its no wonder he is so introspective and difficult in dealing with authority as well as having an outsized sense of justice. This sense of justice has a price and as the series moves forward you can see the toll this has on Jesse as well as those that are close to him.

Each film is well directed but the atmosphere is helped by the fitting compositions by composer Jeff Beal, they not only haunt Jesse as the main character through whom the plot of each film flows, but they undercut each scene well – there is little manipulation added when viewing to the mise-en-scene and the outlook of the ocean, this is a soundtrack that complements the images and spoken audio well.

The following is a breakdown of each TV film that has been produced. They have just been re-released this month and are available now from retailers. The descriptions are not full as to get the most out of the stories you really need to watch them in order and there are many spoilers that would be given away by going too deep into any synopsis. Each movie deals with Jesse Stone and his peers as well as crimes that he has to solve with assistance from those around him.

Jesse Stone (Tom Selleck) is the police chief of Paradise, Massachusetts, a small coastal town north of Boston. A former homicide detective in Los Angeles, Jesse was fired from the LAPD because of a drinking problem that began following his divorce. He was hired for the Paradise position by the corrupt president of the town council who thought he would be easy to control. After five years, Jesse is still in contact with his ex-wife Jenn, who calls him regularly. He also has a relationship with a beautiful lawyer named Abby Taylor (Polly Shannon), who sits on the town council. Although their relationship is mainly physical, they have a genuine affection and concern for each other.

This prequel follows former LAPD homicide detective Jesse Stone (Tom Selleck) driving across the country with his dog Boomer to the small coastal town of Paradise, Massachusetts, where he has been offered the position of police chief. Forced to resign from the LAPD for drinking on duty, Jesse knows that the Paradise job is his last chance.

Meanwhile, Hastings “Hasty” Hathaway (Saul Rubinek), a wealthy banker and corrupt town council chair in Paradise, orchestrates the ‘retirement’ and a secret $50,000 payoff of the previous police chief, Lou Carson (Mike Starr), who has known about Hathaway’s money laundering operation. Carson accepts the payoff, planning to ‘throw a fishing rod in the car’ and drive off to who knows where. Hathaway offered Jesse the position thinking that he was a drunk and a loser, who could easily be manipulated.

Chief of police Jesse Stone (Tom Selleck) and his men investigate the death of teenage girl found floating in a lake. Officer Luther “Suitcase” Simpson (Kohl Sudduth) discovers a high school ring bearing the initials “HR”. In the coming days, Jesse is haunted by disturbing dreams about the girl’s murder. Since moving to Paradise, his private life involves drinking alone at his isolated house on the water with his dog Reggie looking on, occasionally talking on the phone with his ex-wife in California. Jesse is still in contact with his ex-wife Jenn, who calls him regularly. Concerned about his drinking, she convinces him to see psychiatrist Dr. Dix (William Devane), a former detective and recovering alcoholic himself.

Jesse (Tom Selleck) is on the phone with his ex-wife Jenn in Los Angeles, who tells him not to call her that night. She’s started seeing someone, who finds it strange that the two still talk every evening. Stone is dealing with other changes: his deputy, Luther “Suitcase” Simpson (Kohl Sudduth), is still in a coma from a head-wound he received in a supermarket robbery; his other deputy, Molly Crane, resigned from the force to have a family. Her replacement, Rose Gammon (Kathy Baker), is learning to deal with Stone, as she had once worked for his predecessor.

Stone struggles with his drinking. A concerned neighbor, Hilda Evans (Marcia Bennett), recommends the music of Johannes Brahms as comfort during troubled times.

Stone visits his psychiatrist, Dr. Dix (William Devane), whom he hasn’t seen in months. Stone acknowledges that he drinks more when work is slow. Dr. Dix advises him to find a way to occupy his time, and to make it important. Back at the office, Jesse has Rose pull up the unsolved homicide cases (cold cases), and chooses one to investigate: in 1992 female bank teller Rebecca Lewis was found dead and buried after having been taken hostage during a robbery.

State Police Captain Healy is attacked but is saved by Jesse, who is able to get off a couple of shots at the unknown assailant despite also being wounded. At the hospital, Healy reveals to Jesse that he was spying on his nephew, who may be sleeping with his saxophone instructor. Jesse begins investigating the shooting despite protests from the Paradise town council. The town council member’s feel that the police department is already spread too thin, and they and Internal Affairs are concerned about six shooting incidents Jesse has been involved in.

The film begins with the shooting murder of a young man at night as he opens his car door in a parking garage. Jesse Stone who, after his suspension as chief of police, has sunk into seclusion and alcoholism. Ordered not to communicate with his former subordinates while on suspension, he has been out of touch with everyone. Eventually his colleague Rose, an officer, becomes concerned and asks Stone’s friend Captain Healy, the State Police Homicide Commander, to check in on him. Healy is recovering from gunshot wounds and supposed to be on medical leave but, as he tells Stone, he’s taking his leave at his office. Healy finds Stone disheveled, drunk, and despondent. Shortly after Healy arrives, Stone receives a phone call from his ex-wife Jenn, so Healy leaves. Jenn tells Jesse that she needs to talk because she and Elliot had a fight. Angered, Jesse tells Jenn that they shouldn’t speak anymore, and rips out the phone. Later he buys a cell phone, which Rose helps him program. He gives the number only to her and a few others. Jesse and Rose are becoming close.

After being replaced as the chief of police in Paradise, Massachusetts by the town council president’s son-in-law, William Butler (Jeff Geddis), Jesse Stone is still without a full-time job (though he vows to one day be reinstated). Nevertheless, he continues to find ways to pursue investigations into two separate murders: one involves a friend with whom he had lost contact, and the other has him working as a consulting investigator for the Massachusetts State Police Homicide Division on a case involving a robbery and murder suspect. Both Jesse and his friend, State Police Captain Healy (Stephen McHattie), have doubts as to the robbery/murder suspect’s guilt. His problems with his ex-wife, and drinking issues are still present.

Jesse attempts to reassemble his team, starting with his deputy Luther “Suitcase” Simpson (Kohl Sudduth) and then longtime assistant Rose Gammon (Kathy Baker), but both have moved on to other pursuits after choosing to not work with Jesse’s replacement, thus Jesse is left to solve the case himself. State Homicide Commander Healy (Stephen McHattie) also returns, along with Jesse’s psychotherapist Dr. Dix (William Devane). Thelma Gleffey (Gloria Reuben) also remains in Jesse’s life, and continues to work as a sales associate at Hasty’s luxury car dealership.

Police Chief Jesse Stone (Tom Selleck) accepts a position as an unpaid consultant with the Massachusetts State Police, working for Lt. Sydney Greenstreet (Leslie Hope) who gives him case files on several murders. After reviewing the files, Stone takes special interest in one case that involves the fourth victim of a brutal serial killer who slashed and disemboweled his victims while they were still alive. The jailed killer, a man named Richard and known as the “Boston Ripper” (Luke Perry), admits to the first three murders with pride, but maintains he did not commit the fourth murder. After interviewing the killer, Stone concludes that he’s a “sick son of a bitch”, but does not believe he killed the fourth victim, Mavis Davies. 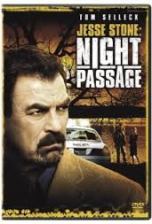 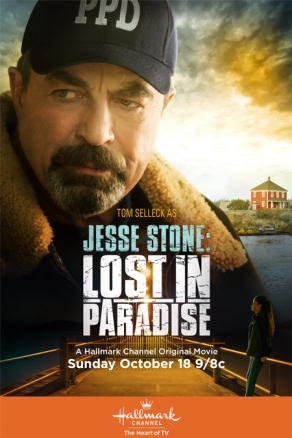