Megan: “You’re not gonna get rid of me. You’re gonna pay for this for the rest of your life.”

This film was set up as a spiritual successor to “Gone Girl” (2014), the David Fincher adaption of the book of the same name. That film made US$370 million worldwide was nominated for an Oscar for Best Actress, Rosamund Pike, and was hailed by most critics as a success. A few years later a book is published, “The Girl on the Train” the first written by Paula Hawkins a thriller with a woman at the center – the “Gone Girl” comparisons begin. The film of the book has its weaknesses but some of them are off set by the cast led by the extremely talented Emily Blunt.

“The Girl on the Train” is about Rachel Watson (Emily Blunt) an alcoholic, who divorced her husband, Tom Watson (Justin Theroux), after catching him cheating on her with their real estate agent, Anna Boyd (Rebecca Ferguson). During their marriage, Rachel was prone to alcohol-induced blackouts during which she engaged in self-destructive behavior that she only later learned about from Tom, and to which she attributes the ending of their marriage, in addition to her being sterile.

Rachel spends her days commuting on a train, often stalking Tom, Anna, and their newborn daughter Evie. During her trips, Rachel grows fascinated with Tom’s neighbors, Scott (Luke Evans) and Megan Hipwell (Haley Bennett), a young couple in what Rachel believes is a perfect marriage. In reality, Scott is aggressive and controlling, while Megan is detached, prone to dishonesty and sex addiction, which we learn through her therapy sessions with her psychiatrist, Dr. Kamal Abdic (Édgar Ramírez).

After a drinking binge, Rachel leaves the train to confront Megan, only to black out and awaken hours later at her apartment, injured. Rachel later finds out that Megan is missing and presumed dead, and is questioned by Detective Sergeant Riley (Allison Janney).

The film is a nourish thriller that takes its cue from not one but possibly more unreliable narrators. It also at times can be very hard to follow as the plot and narrative are completely mixed up to be at some points nonsensical. It does not stay that way the entire film but that type of storytelling can be tiring as an audience member. Also it does not help that almost every character in the story is completely unlikeable – even the protagonist of the story, Rachel, who spends most of the running time in a funk as well as relieving the worst moments of her life in flashback.

I am not going to say what twists there are, but of course it would not be a thriller if the plot was straight forward, and it isn’t – it may have served the narrative more if there was more of an even split with the plot and then by the time any reveal has happened the viewer might not be completely sick of the story itself – I found myself at some points wishing the film was over already!

Now this may sound like a completely negative review and a complete turn off – but there is some good news in that I have watched the movie twice and I enjoyed it much more on the second watch. I put this down to the performances and knowing where the film is heading – I had much more compassion for the characters I should have compassion for in the first place, and this helped immensely.

The director, Tate Taylor who directed both “The Help” (2011) and “Get On Up” (2014), which are pretty much straight forward dramas (no offence) struggles with this genre and that is not his fault, as it is a big step going from a formulaic plot and narrative to one that has to be coherent as well as keeping an audience on their toes.

I would recommend this DVD/Blu-ray to anyone that enjoyed the book to see what changes were made in the adaptation as well as anyone that enjoys re-watching thrillers. The lead actress Emily Blunt is excellent as usual and garnered a BAFTA nomination for her role – that is worth seeing alone. 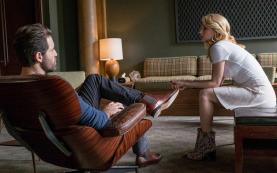