Directed by: J. A. Bayona

The Monster: “I know everything about you, Connor O’Malley. The truth you dream, the truth that you hide.”

A Monster Calls is a 2016 dark fantasy drama film directed by J. A. Bayona and written by Patrick Ness, based on his own novel. The film deals with some pretty heavy emotions and events that we all must deal with, but this story is about how a child must learn to live with a loved one who is facing the possibility that they are going to die. Not only that but there is a complication in that the child’s father is living in another country and only has an older Grandmother to rely on.

The film’s plot is based around young Conor O’Malley must face his mother’s terminal cancer, his strict grandmother, his estranged father, and his school bully, Harry. One night at 12:07 a.m., Conor encounters the tree-like Monster, who tells Conor it has come to relate three true stories, after which Conor will tell the Monster his own story, the truth behind his nightmare. They continue to meet at 12:07 a.m. or p.m., and Conor ultimately understands that though he does not want his mother to die, he understands it is inevitable and something he must accept, and that he wants the experience to be over. After this, Conor returns, with the Monster by his side, to comfort his mother one last time, and she dies at 12:07. He returns home with his grandmother, who becomes caring towards him and gives Conor a room of his own. In the room he finds his mother’s old art book, which depicts the characters of the stories that have been told by the Monster, and a drawing of his mother as a child with the Monster.

This film has a budget of US$40 million but it looks like a bigger budgeted film and this is all to Bayona’s credit. It must have been difficult to green light a film about a child and a talking tree that may never find an audience. Don’t be fooled, while the main character is a child this is not necessarily a film for all children. It must walk a fine line between being too much for children and not enough for adults and in most cases in succeeds without question – it is something to behold and once again full credit must be given to Bayona for following through on what must have been some pretty tough decisions.

It is always great to see a new child actor being able to carry an entire film and newcomer Lewis MacDougall as Conor is in every scene of the film carrying off a touch perfect performance of a boy who is going to lose his mother, the most important person in his life, and has no idea how to deal with the multitude of conflicted emotions. He (with help) imagines a mentor/bodyguard/friend in the Liam Neeson voiced tree, if you look hard enough there is a link between the tree character and the rest of the family. Neeson is of course a great actor, but with that gravely Irish tone is perfectly cast in the voice role, and brings all the gravity you would expect of someone who once played Zeus. Felicity Jones in her fourth major role since her break out performance in “The Theory of Everything” (2014) shows why in a supporting role is one of the most in demand actresses today. The supporting cast of Sigourney Weaver and underrated Toby Kebbell round out what is an absolutely perfect film.

If you do go and watch this film with a child then you may find you have some explaining to do to them – but in my mind that is a positive, as we all face the loss of loved ones in this life. This movie handles a painful subject with humour, drama and love in what could have been a disaster. The ending is greta and od course there will be tears – but the film is hopeful especially in its final moments which bring the entire story full circle. Go and see at theatres! 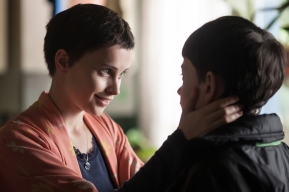