Sgt. Tommy Saunders: “What I saw today, good versus evil, love versus hate. There’s only one weapon you have to fight back with, it’s love. You wrap your arms around each other, I don’t think there’s a way they could ever win.”

The second film within six months from Peter Berg and Mark Wahlberg after the excellent “Deepwater Horizon” (2016), this is another true story, centered on the immediate aftermath of the 2013 Boston Marathon Bombing.

On April 15, 2013, two bombs explode during the Boston Marathon. In the aftermath of the attack, police Sgt. Tommy Saunders (Mark Wahlberg), FBI Special Agent Richard DesLauriers (Kevin Bacon) and Commissioner Ed Davis (John Goodman) join courageous survivors, first responders and other investigators in a race against the clock to hunt down the suspects and bring them to justice.

If something is worth doing its worth doing right – this is something that goes through my mind when I watch Peter Bergs films, he has an inate sense of how to portray real life scenes of tragedy and heroism in a way that makes you feel a part of the action or event as well as following the characters journey. It must also be said that his now frequent collaborator, Mark Wahlberg, is fast becoming a reliable character actor, so much so that he is able to hold his own onscreen with many of the top actors working today. It must be only a matter of time before he is rewarded for that, and I for one hope it happens in a Peter Berg directed film.

Berg not only uses a cinéma vérité approach to this film, he also uses something the authorities would also use, the footage from smart phones, CCTV footage and television footage to show not only the hours before the event but also during, when the carnage was at its worse –  then after when the speedy and extremely stressful investigation gets underway. This is extremely effective as it of course seems to let us in on the main focus of the film, that is the characters, but does not tell us what role they will play. In the second half of the film as we move in on the bombers and the investigation is in its later stages Berg takes a more traditional approach, we see conventional setups take shape right up to the final moments. It is an effective approach and is a film of two halves – we are thrown off in the first and then we regroup and start to take stock and move into more traditional movie making.

For a film with such a basic storyline the depth comes from the characters, much like his earlier work, “The Kingdom” (2009), where, while it covered similar territory it was the relationships that served as the meaning behind the film. This too does something similar, with Saunders (Mark Wahlberg) who interacts most frequently with, DesLauriers (Kevin Bacon) and Commissioner Davis (John Goodman) – there are some self-reflective moments between Saunders and Superintendent William Evans (James Colby). These are all welcome as they put real emotion into the police and what some of the investigators went through over the five days of the event.

Berg is at his best (it seems from recent evidence) at presenting the minutiae of any part of a given story that involves a process that needs to be carried out where the objective is to discover some truth. He has done this in many films but none so clinical as “Patriots Day” where the discovery is not only important to one person or one city but to an entire country. As we have witnessed over the past sixteen years there is nothing so scary as a random (seemingly) act of violence and in this case terrorism. It has to be said it is not only surprising how quick the terrorists were brought to justice but how it happened through seemingly unrelated coincidences and acts of real bravery by everyday people.

The humanity of the victims and survivors is in show with a number of the cast and they are given quite a bit of screen time. The only character we do not see enough of is the wife of Saunders played by Michelle Monaghan who as usual shines in all of her brief appearance – this could have been beefed up to illustrate the toll on the family of the authorities investigating the bombing.

This film sits nicely alongside other Wahlberg/Berg joints such as “Lone Survivor” (20011) and “Deepwater Horizon” (2016) as well the Berg directed “The Kingdom” (2009) and “Friday Night Lights” (2005). I recommend this movie highly and it looks great on the big screen. 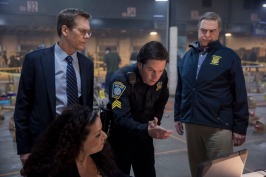 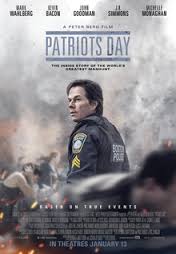