Mary Jackson: “Every time we get a chance to get ahead they move the finish line. Every time.”

Whilst some could argue this has been a good year for minorities in films I would argue that the fact that it is highlighted shows film makers still have a long way to go and in regards to women in film there is even a longer way to go. However, it is with glad tidings that I report that “Hidden Figures” (2016) directed and co-written by Theodore Melfi gives hope with a rousing story about three African-American women working for NASA in the 1960s, holding their own against absolutely everything and everyone of that era.

The film recounts the story of three African-American women who worked in professional positions at NASA and helped the United States advance during the Space Race. Mathematician Katherine Johnson and her two colleagues, Dorothy Vaughan and Mary Jackson, worked in the segregated West Area Computers division of Langley Research Center in Hampton, Virginia. Using these calculations, NASA supported John Glenn in becoming the first American astronaut to make a complete orbit of Earth.

This is a fundamentally a great film and everyone involved has done an exceptional job in all aspects of production. In particular the writing, directing and acting (the big three) are top notch and it is incredible to think that is has taken this long for this story to be told, particularly when we live in a world where “Driving Miss Daisy” (1989) exists.

The film’s narrative is told mostly from the point of view of Katherine Johnson (Taraji P. Henson), Dorothy Vaughan (Octavia Spencer) and Mary Jackson (Janelle Monáe) with their stories told in of importance with the relevant amount of screen time allocated to them. While the films plot is based mainly around Johnson, it is important to note that both Vaughan and Jackson have their own very personal and separate arcs within the narrative, each fighting for their own way through the system that they have been marginalized within.

To say this film is about race and what that meant to African Americans living in Virginia in the 1960s would be an understatement. The film does shy away from any real racial violence of the time, and instead focussus on what it was like to try and get along while taking small steps towards a better life. Each of the principal characters are close friends and encourage each other in a very real way – not making grand statements, but asking questions and making themselves think about how they can become more than the promise of what Has gone before. Like the astronauts themselves these women were as much pioneers as those explorers. They had courage in the face of the unknown and know at any time the wrong step could be their last – they also are aware that they are standing on the shoulders of ancestors and relatives that have led their lives to this point.

This is a drama but there are many moments of levity which is a valid way of dealing with stress and the director and co-writer Theodore Melfi, who fresh off his under-rated debut “St. Vincent” (2014), knows how to balance the two very nicely without becoming too reliant on laughs or sentiment. That brings me to the music, which is another highlight of this fantastic film.

Pharrell Williams is an integral part of this movie, it is his presence that really pushes this film above many others – he acts as Producer, Composer and a soul to the film. When making a period piece that involves African Americans it would be easy to play the sentiment card and have music of the period playing, having the characters singing along – this film goes a different route. Williams has composed and performed (it must be said along with star Janelle Monáe) music for the film that is original but harks back to the time and it is excellent – I highly recommend buying the soundtrack – I am listening to it as I write this.

Like all great films, this one, as a drama, is built around great, believable and passionate performances, led by the incredible and talented (and Oscar winner) Octavia Spencer, she has proved over her career that she is an actress with talent and is to be reckoned with on the screen. She acts as the member of the trio that holds them together and never lets on her own issues, instead she figures out not only how to keep her job, but the jobs of her friends, by learning a new computer language and making herself indispensible to NASA and to the people who actually designed the computer in the first place. Janelle Monáe plays the firebrand of the piece and is showing how talented she is, by not only being a musical artist but an actress to watch for in upcoming films. Finally, the glorious Taraji P. Henson who has been lighting up the screen for years as a character actress, now finds herself in the lead role in what is going to be a major success and she grabs the reins and doesn’t let up, not even when the final reel has run.

The supporting cast, led by Kevin Costner, and including Kisten Dunst, Jim Parsons and Mahershala Ali also come to the movie firing on all cylinders – they are all playing real (mostly) people that either hinder or help the three woman attain their goals – each is unapologetic in what they witness over the course of the piece and this makes them at once sympathetic and real to themselves.

Its hard to make a perfect film and the only quibble I have is that the relationship between some of the secondary charters is not explored fully and in some cases there feels like a lot was left on the cutting room floor. This is very minor as I can see it meant there was more that the filmmakers wanted to focus on – the three women of course!

This is a film that only comes along once in a while and without reservation you should seek this out at theatres and enjoy it as much as the audience I saw it with – and if you feel the need to clap then do so – this is something that is worth celebrating! 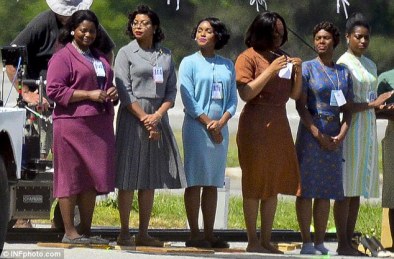