Maui: “Do you know who Maui is? The greatest demigod that ever lived, who stopped the sun, who pulled up islands out of the sea, and battled monsters. Do you know why I know all this? That’s because, *I* am Maui!”

The latest in a long line of Disney Princess movies arrives this week, but unlike other Princesses this one has agency, she does not rely on a man, or is even interested in a man in that love story kind of way. If anything, she is an enabler of the leading muscle bound hero, but does not need him in any traditional way. In fact this film is more about brain than brawn!

“Moana” begins with a small pounamu stone that is the mystical heart of the goddess Te Fiti is stolen by the demigod Maui, who planned to give it to humanity as a gift. As Maui made his escape, he was attacked by the lava demon Te Kā, causing the heart to become lost in the ocean along with his magical fishhook.

A millennium later, young Moana Waialiki, daughter and heir of a chief on the small Polynesian island of Motunui, is chosen by the ocean to receive the heart. Her father, Chief Tui, insists the island provides everything the villagers need. But years later, fish become scarce and the island’s vegetation begins dying. Moana proposes going beyond the reef to find more fish. Tui rejects her request, as sailing beyond the reef is forbidden.

The film moves along at a brisk place and like most recent Disney Animation films it follows the trope of a road movie and borrows from others, this is definitely not a negative – one of my favourite parts could be lifted straight from last years “Mad Max: Fury Road” (2015) when Maui and Moana are attacked by sentient coconut pirates called Kakamora, who surround their boat and steal the heart, but Maui and Moana retrieve it. This for me was one of the more technically complex parts of the film and the director’s pull it off as well as George Miller ever could.

Another fantastic part of the film is the music composed by wunderkind, and I am sure soon to be EGOT winner Lin-Manuel Miranda (and Opetaia Foa’I and Mark Mancina) – his touch is all over the music and lyrics and he even sings on the soundtrack (now available). Without the great music leading the way this film would still be great, but with the music, it adds another layer to the movie and lets us experience the fantasy of Moana and Maui – as well as helping us feel for them as real life characters and by the end of “Moana” you will be humming the music for quite some time.

Except for the scene stealing Jemaine Clement and Disney’s good luck charm Alan Tudyk the movie is filled with new actors providing both their spoken and musical talents. The standout is of course Auli’i Cravalho as the voice of Moana, in her debut role, who matches her onscreen alter ego with a voice that is both strong and vulnerable, she matches up against her co-stars like she is the one with all the experience. Of course there is the one and only Dwayne Johnson, who has a voice made for Maui but maybe not the singing in a Disney film – he does have only one song so all is forgiven pretty quickly! Finally, in a film with many surprises Jemain Clement as a giant crab named Tamatoa with his Bowie like song really ups the ante of how Disney characters can behave and almost steals the show, until the brilliant and inventive ending, with a twist you might not see coming.

This is not only a film for the holidays but is undoubtedly one of the films of the year and one I must say should be considered at the Oscars for not only Animated Film of the Year, but also a best picture nod – this is one of the most original and groundbreaking (with it goes the term populist) films of the century. Not only is the film not a typical princess film but all of the characters are non-white, but has a cast that is non-white as well – remember this is the year when a Japanese animated film is voiced by all white actors and movie stars. One of the most mainstream film companies on the planet has had box office success with twists on familiar genres and has made them all original – Disney is my MVP for the year – bring in 2017! 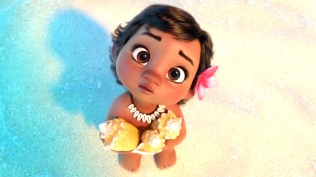