[FINAL CREDIT]: “The producers of this film wish to stress that it is the stated position of the Department of Defense and the United States Air Force that a rigidly enforced system of safeguards and controls insure that occurrences such as those depicted in this story cannot happen.”

This and the film “Dr. Strangelove or: How I Learned to Stop Worrying and Love the Bomb” (1964) were released in the same year and were both based on the novel “Red Alert” with “Fail-Safe” being sued by the author for being too similar. It is no doubt the Kubrick film is superior with a more expansive plot and it also having elements of satire and black comedy this almost absurdist nature hits more of a punch.

The film is based around what happens when a military computer error deploys a squadron of bombers to destroy Moscow, the American President (Fonda) tries to call them back. But their sophisticated fail-safe system prevents him from aborting the attack, so he must convince the Soviets not to retaliate. In desperation, the President offers to sacrifice an American city if his pilots succeed in their deadly mission over Moscow.

The President struggles to find a resolution that will stop the Soviet Union from launching a counterattack; if he fails, an all-out nuclear holocaust will be unavoidable. He offers to sacrifice an American target to appease the Soviets, and he orders an American bomber towards New York City. The President’s advisers in the Pentagon discover that the First Lady is visiting New York City.

The lone surviving American bomber devastates Moscow. The President orders General Black (Dan O’Herlihy), whose wife and children live in New York, to drop the same nuclear payload on that city, using the Empire State Building as ground zero. After releasing the bombs, Black, who is flying the bomber, commits suicide. The last scenes of the film show images of people in New York going about their daily lives, unaware that they are all about to die.

This is no doubt a very dark film for its time, and juxtaposes Dr.Strangelove as I have said that had a large amount of black comedy and was satirical of just about every power structure going  – this is completely serious and there is absolutely no humor at all.

“Fail-Safe” does ask some serious questions about who is actually responsible for events that unfold and at what point should the decision to go to nuclear war be a political or military one. The film does offer a kind of answer but as it unfolds it becomes people making decisions and talking about destroying our way of life with little regard for the ‘reality’ of that decisions. After fifty years this is still a heck of a watch and leaves the viewer feeling angry, sad and bewildered about the knife we still live under all these years later.

The film has a huge cast and for my mind Henry Fonda as the US President and a very young Larry Hagman as a Russian translator steal the film, they are incredible and show why they were both character actors and stars for most of their lives and careers. They are honest and unflinching with no one to answer to but their own moral code.

I recommend this film highly as with those below as a quick and enlightening education on how easy it is for life to end with either human or computer errors and why it makes sense for these weapons to disappear from our world now and forever.

If you enjoyed this then watch: 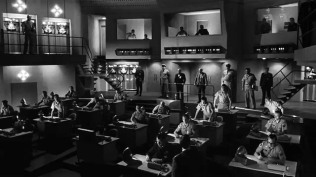