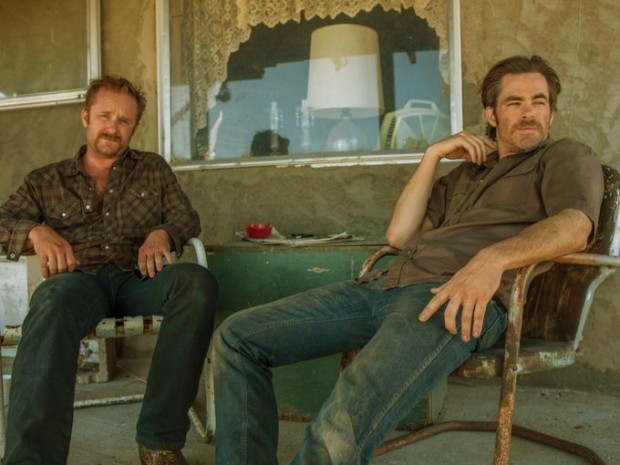 T-Bone Waitress: “I’ve been working here for 44 years. Ain’t nobody ever ordered nothing but a T-Bone steak and baked potato. Except one time, this asshole from New York ordered a trout, back in 1987. We ain’t got no goddamned trout.”

Old Man: “But you ain’t Mexicans.”

Having heard early reviews of this movie I had been looking forward to watching this film for some time, and it did not let me down, from the rugged depressed landscapes, to the real life characters, as well as the performances from all the  actors. The inhabit their roles like they were born to them with a deserved mention of Chris Pine in a role that he has been waiting for a long time. I will mention him again later but he is a revelation in this role, and i would like to see him rewarded for it.

Plot and narrative wise “Hell or High Water” is pretty tight, it takes place in West Texas, where we find divorced father Toby Howard (Chris Pine) and his ex-con brother Tanner (Ben Foster) carrying out early morning robberies of two branches of the (fictional) Texas Midlands Bank. They plan to commit several small-scale bank robberies over the course of a few days. Though the robberies are well planned, Tanner’s wild nature leads to him taking unnecessary risks. It is revealed that their mother has recently died, leaving their ranch in debt due to a reverse mortgage, which, if not paid off in a few days, will result in foreclosure on the property. Toby is determined to pay off the mortgage and, because oil has recently been discovered on the land, he plans to sell the oil rights in order to pay for a comfortable life for his estranged sons.

While on the run they do not appear on either the local polices or FBI’s radar because of the low amount taken but they do come to the attention of two Texas Rangers, Marcus Hamilton (Jeff Bridges) and Alberto Parker (Gil Birmingham), are sent to catch the robbers. Hamilton, who is close to retirement, quickly determines the brothers’ methods and personalities.

From here the film really gets going and the description of the plot will end here to avoid any possible spoilers but this film will not end how you might think – after all many of the characters have been raised in similar environments over an eighty year period and have seen their homes and economy change so much.

There are three main elements of this film I absolutely loved and they are in no particular order, the transportation of a classic film noir into a socially conscious Western Neo Noir that captivates with its story and takes into account the real stresses on human life in dealing with their jobs, lifestyles, choices made and to make as well the human condition. The frailty each of us faces in our daily lives – it is also about choices and the consequences of those choices and where we are led by them.

The direction is simple but effective using the natural surrounds of the country and representing Texas in a kind of backward way where people say what they think and everyone has a gun – but there is always someone with a bigger one.

Finally the key to the believability and success of this film relies on the four main characters led I believe by the brilliant Chris Pine fresh of playing Captain Kirk it is great to see him reacting without special effects and playing someone real who has a family and motivations many people can understand especially in poor rural town s in the US. Jeff Bridges and Ben Foster give their normal great character performances but I do believe it is Pine’s show and it is fantastic.

I recommend this without hesitation.

If you enjoyed this try: 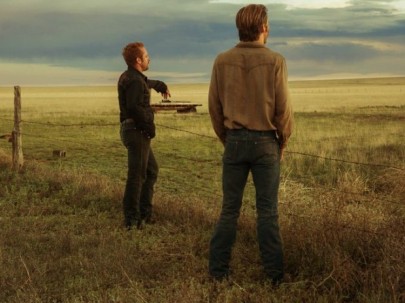 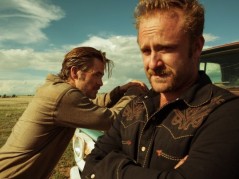