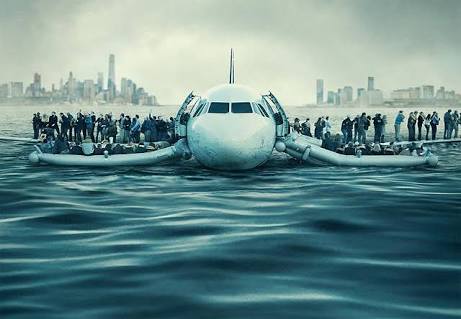 Drama, Based on Real Events

Chelsey “Sully” Sullenberger: “Everything is unprecedented until it happens for the first time.”

On the surface this film may seem like an odd choice for a film – I mean how can you build a prestige project around one event that lasted less than five minutes – we it’s a credit to all involved particularly the subject, Chelsey “Sully” Sullenberger, that this is one of the movies of the year and has to be an early favorite for Oscar consideration – it is a real story of extraordinary people doing amazing things just to preserve life as well as backing their own decision making in the face of detractors and Monday morning quarterbacking.

The plot itself is simple and revolves around Captain Chelsey “Sully” Sullenberger landing his plain full of passengers (155 souls we are told) into the Hudson alongside New York City and the immediate fallout for him and his crew. What could have been told in a very simple way is lovingly complicated within the narrative, and pretty much the entire film is told from Sully’s point of view. The other thing that the director may have done was turn this into some kind of courtroom drama and made it very boring. Instead the film pretty much stays mobile with shots of different outcomes of his decisions, him running around New York, literally exercising any demons he may have, and phone calls with his wife where he may be still but she walks around with her phone showing us what is going on from her point of view.

The performances in Clint Eastwood films are nearly always flawless and that speaks to his talent in casting but these days you cannot go wrong with Tom Hanks in a lead role, and he shines here almost disappearing into his role. It is important to say that you can see the respect that he and all the cast and crew show in making this moving picture that gives us a portrait of a human being and not some sort of made up action hero.

The interesting way in which the story is told, and this is given away in the shorts, is that it does for most of the film make you and the characters doubt that the right decision was made, and it is to this what the film is really asks the characters to struggle with. I believe it is also asking – is there a place for someone with over forty years experience or should they be discarded for younger, quicker but possibly flawed individuals in the workplace. Of course this film is made and about by mostly people (and it has to be said white men) who think they know the answer – and I bet all those passengers know the answer as well.

The real secret to this film is in the edit, and Blu Murray has to take much of the credit as this is the first real movie he has been a part of and I look forward to seeing more of his work in the future. It is one of the shortest Eastwood films I cab remember in quite a long time. As I said it moves quickly and all the characters are mobile as well and I applaud Eastwood for all the decisions he makes as a filmmaker. For my mind and for some time he has been the singular aged presence in films for some time, and whilst you may not agree with his politics there is no arguing with his talent.

If you liked ths then see: