Michael Moore: “I am an American. I live in a great country, that was born in genocide and built on the backs of slaves.”

Michael Moore has become his own brand over the past twenty five years, helping usher in the ego driven documentary. He has had huge success with many of his documentaries such as the timeless “Roger & Me” (1989), set in his hometown of Flint, Michigan,where Moore attempts to speak to General Motors boss Roger Smith about possible layoffs, to the Oscar winning and box office juggernaut “Fahrenheit 9/11” (2004), which cemented him as some kind of agent provocateur for the “people”.

This month sees the DVD release of his latest film “Where to Invade Next”, a welcome return to form after some lacklustre and very much Moore-centric movies.

In “Where to Invade Next” we follow Moore as he strives to find out what other countries are doing to educate, look after and empower their citizens and what the country he loves could use to help their own citizens.

As with all of Moores films he has a point and in this movie it is a good one. He and it illustrates how US citizens have slowly over the past thirty years have had some pretty basic rights either removed or not even considered by successive governments.

This is a great watch and recommended to those that would like a taste of what Moore received that is that there are some countries that treat their people with respect and trust – a lesson that could be learned in New Zealand I think. 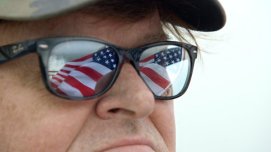