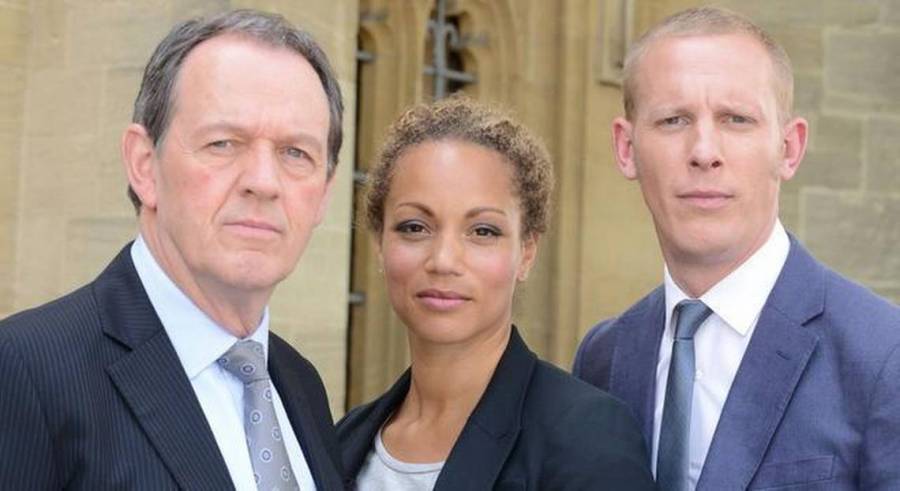 Dr. Laura Hobson: “The jugular vein and carotid arteries were sliced right through.”

DS James Hathaway: “By a piece of the mirror?”

Released recently on DVD is the first five series of the English crime drama “Lewis – Season 1 – 5 ” (2006-2015) which itself is a spinoff of the long running “Inspector Morse” (1987-2000) which featured John Thaw as Detective Chief Inspector Morse and Kevin Whately as Sergeant Lewis who were a mismatched pair that were always solving crime in Oxford.

This new series sees the now promoted Detective Inspector Robbie Lewis, still played by the excellent Kevin Whately, now he is assisted by his partner D.S. James Hathaway played by newcomer (to the series) Laurence Fox who as an educated police officer does an excellent job acting the part Morse used to, which is still a priceless dynamic.

As you would expect the relationship commences on a rocky note but as all odd couples do, both police officers find their feet over the series which, because of all those involved is done as smartly as possible with excellent directors and a great supporting cast with some excellent guest stars in each story. Together they investigate murder mysteries against the historic and glorious backdrop of Oxford and its University campus. With Clare Holman as Dr Laura Hobson and Rebecca Front as Chief Superintendent Innocent.

It’s pretty simple in terms of whether you will enjoy this series, if you enjoy mysteries that are set in idyllic locations as well as a storied University with all that entails you will love this series. It has a number of excellent actors who take their job seriously so they inhabit their characters which is fun to watch. I had never watched much of “Inspector Morse” but when it came to this series I really enjoyed it and was sad when it ended.

Repuatation: DI Robert Lewis teams up with DS James Hathaway to look into the murder of an Oxford mathematics student.

Whom the Gods Would Destroy: A middle-aged Oxford graduate is found murdered. The investigation implicates a senior university figure and leads to a long-hidden secret.

Old School Ties: A former criminal computer hacker turned best-selling celebrity and one of his student sponsors are murdered after being invited to lecture at Oxford.

Expiation: When an Oxford housewife is found hanged in her home, Lewis and Hathaway unearth a far darker murder case than the initial suicide verdict suggests.

And the Moonbeams Kiss the Sea: The murder of a maintenance worker at the Bodleian Library and the death of a popular Art student seem to be linked.

Music to Die For: Lewis investigates the garroting of an aging Oxford don planning an Wagnerian festival and discovers a tenuous connection to his former boss, Inspector Morse.

Life Born of Fire: The suicide of Hathaway’s old friend tests his relationship with Lewis as he must come to terms with ambivalence about his own sexual past.

The Great and the Good: Lewis and Hathaway become involved in the drugging and rape of a schoolgirl and discover that it is connected to several bizarre murders.

Allegory of Love: The fabulously successful Oxford-based fantasy novelist seems to Lewis to be the key to solving the bizarre murder of a beautiful woman with a mirror.

The Quality of Mercy: Lewis investigates the murder of student Richard Scott. He was killed just before premiering The Merchant of Venice. During the investigation Lewis gets personally involved.

The Point of Vanishing: A former religious fanatic who deliberately tried to kill an outspoken atheist in a car crash but only succeeded in crippling his daughter is murdered.

Counter Culture Blues: The lead singer of a 60s rock band who is believed to have committed suicide 35 years earlier suddenly materializes and wants to reorganize the group.

The Dead of Winter: Murders occur in Crevecoeur Hall, a lavish Oxford estate where Hathaway’s father was in service and he spent his boyhood.

Dark Matter: An Oxford professor, also an amateur astronomer and recently renewed churchgoer, is found dead in the school observatory under suspicious circumstances.

Your Sudden Death Question: Six couples gather at Chaucer College for a competitive weekend 5000 pound trivia contest but several of the participants are summarily murdered.

Falling Darkness: During a Halloween, one of Dr Hobson’s college roommates is found dead with a stake through her heart and a garlic bulb in her mouth.

Old, Unhappy, Far Off Things: As the last remaining all-women’s college in Oxford is bidding farewell to one of its most distinguished professors, murder rears its ugly head.

Wild Justice: During an ecumenical conference in formerly Catholic St. Gerard’s college, the poisoning of a female black American bishop triggers a series of bizarre murders.

The Mind Has Mountains: The ethics of a questionable drug on the Oxford campus of anti-depressants calls into account the questionable judgment of a psychiatry professor.

The Gift of Promise: When a retired MI5 official writes her best-selling memoirs, a chapter in her book about an unsolved IRA cold case causes consternation and ultimately several murders.