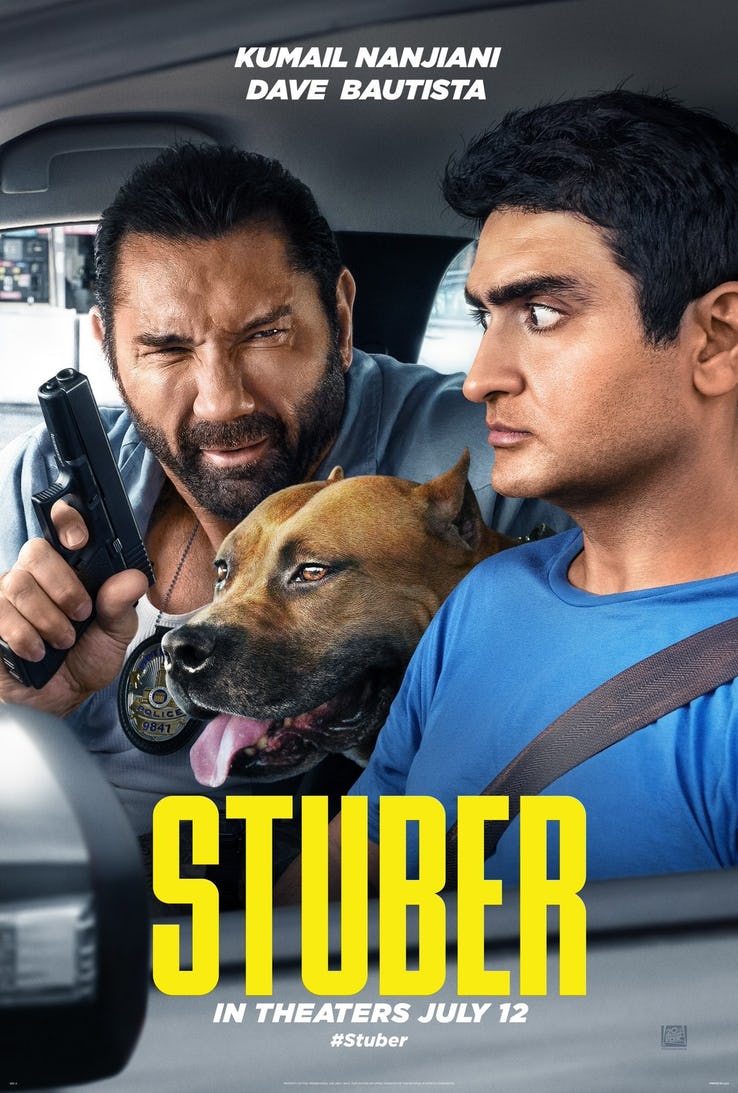 Stu: [jokingly] “Hey, lemme guess, you want me to drive you to all the Sarah Connors in the city?”

Released recently on Blu-ray/DVD is a comedy (of sorts) featuring rising star Kumail Nanjiani and Dave Bautista in the trying to be relevenant “Stuber” (2019) that has nothing going for it at all, to call it a comedy would be over reaching. Really the only element it has going for it is the cast but not even they can elevate this ordinary material.

The story is based around Stu Prasad, a meager Uber driver obsessed with getting his first five-star review in the app, is forced by an aggressive Los Angeles Police Department detective Vic Manning to drive him around town to catch notorious drug lord Oka Tedjo. That is the basis of this story and really it is as simple as that, there are really no flourishes, in fact I can imagine the writer coming up with he Uber idea and thinking that was the hard work done, my friend I can assure you it wasn’t. All I can think is that the cast was offered too much money as this movie was never really going anywhere, which is odd considering it is a about an Uber driver.

While there have been an abundance of ex-wrestlers who have turned in comedy performance in movies, they have been successful in small scene stealing parts, think John Cena in “Trainwreck” (2015), however at this time Bautista can’t carry a movie, especially a comedy. With the script being this bad both leads just seem happy yelling at each other for the entire movie which might be considered funny in the short term, it becomes tiresome and annoying when it is deployed for laughs.

Written by Tripper Clancy and directed by Michael Dowse, “Stuber” may have been created with the idea of some kind of originality but the director who did have some success with ice hockey comedy “Goon” (2011) which like this squeaked by with its cast, misses here with its complete unoriginally and derivativeness. To be fair it seems that Clancy does not have a writing career in his future with this as proof as well the other movies he has written. It seems like he lucked into some happenstance where he wrote a screenplay and two of the hottest up and comers agreed to do it, he won the lottery there.

There are some nice moments from the supporting cast, I was looking forward to seeing the always great Karen Gillan but in what is typically a device to push the narrative along she is killed and becomes the reason for the movie to exist in the first place. This is exactly what this movie is, taking an actress who could headline her own movie and fridging her so that the men have something to do, it is cheap and trope laden.

Look, I wouldn’t bother with this movie at all, it is cheap and not funny, it never aims for anything so can’t be accused of not hitting the mark. Both Bautista and Nanjiani have stolen movies from their costars in other movies but there they are miscast, unable to save their own movie, definitely not five stars, try again guys.