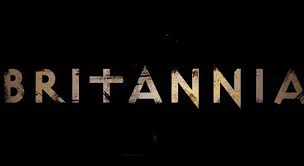 “When I look over my shoulder (what happens then?)
What do you think I see? (Mm)
Some other cat looking over (shadoop, shadoop)
Over his shoulder at me” – Season of the Witch, Donovan

Released recently on DVD is the second season of the English show “Britannia” (2017-present) set in AD45, the first season received mixed reviews so it is surprising that a second season went ahead. It could come down to the fact that there are a surprising amount of A list television actors appearing in it.

The series follows the Roman conquest of Britain. Celtic rivals Kerra and Antedia must work together to fight off the Roman invasion led by Aulus Plautius.

The show is shot largely on location (in England, Wales and the Czech Republic) and makes decent use of the verdant countryside, but Sky’s budget is a fraction of HBO’s and there are no CGI-enhanced vistas to provide a sense of scale. Equally, for a story about conquest, battles are few and far between, and largely limited to feeble pushing and shoving in the woods.

“Britannia” does have an unusual tone it veers from odd to serious to sometimes funny but the series is not one long joke. There is a use of popular music throughout which sets an odd tone but it can suit scenes that those songs appear over. None of this really matters of course as like some other shows this show is something that audiences just go with, don’t think too hard and everything will be alright.

Episode One: Two years after the invasion, a dead man awakens who could spell the end of everything

Episiode Two: The Dead Man sends Hella on a mission. Phelan’s new life comes crashing down and Rork’s suspicions about Veran lead him into a duel.

Episode Three: Veran gives Ania a terrible choice. Harka brings Phelan under his spell and the next stage of Cait and Divis’s prophecy begins.

Episode Five: A dream causes tension between Cait and Divis. Harka sends Love on a heart-breaking mission and Veran commits the ultimate betrayal.

Episode Seven: Vitus returns with a message for Aulus. Ania is placed in an impossible situation and The Traveller tracks down Lucius.

Episode Eight: Aulus outrages Domitius with a confession and Andra discovers the truth about her family. Divis tries to use his powers on Love.

Episode Nine: Divis gets one last chance to prove himself. Meanwhile, Cait’s newfound happiness is cut short as Phelan tries to right his wrongs.

Episode Ten: Veran and Harka face each other in a challenge only one of them can survive. Cait is forced to face her destiny.