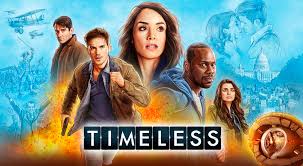 Released this week on both blu-ray and DVD is the relatively short lived science fantasy show “Timeless – Season Two” (2018), at least the conclusion to the entire series, including the movie length finale. It is easy to see why this show was a little lost in terms of finding an audience, it was on a major network in NBC, on the surface it seemed like a throwback to series from the 1980s and 1990s and the sheer competition in terms of scripted shows is huge, the year this was released it was one of over four hundred and fifty scripted series. Of course the most obvious comparison is to the 1960s series “The Time Tunnel” (1966-1967) which operated in a similar way albeit without the underlying conspiracy story cribbed from “The X-Files” (1993-2018). None of these elements are negatives, in fact in another era “Timeless” may have broken through and lasted much longer than two seasons but it did not have enough to seperate it from other new or exiting shows. One aspect that I believed did hurt it was its tone was very middle of the road so that it did not have any kind of edge to it, so it had to rely on the actors to provide that which because of the nature of the show they were unable to, which again cost the series in ratings as well as reviews.

The broad outline of the show is based around the idea of an experimental time machine which is stolen, a history professor, a soldier and an engineer are tasked with capturing the culprit. They soon learn, however, that the thief plans to rewrite American history, and that each of them has a connection to his plan, as well as the mysterious organization that funded the machine’s development.

It is not difficult to see why this show came into existence with two creators who have both has immense success with their own projects, Eric Kripke with the long running “Supernatural” (2004-2019) and Shaun Ryan who broke through with his genre busting “The Shield” (2002-2008), it may have seemed like an odd marriage but both had their strengths. The automatic reaction would be that they would bring their strengths to bear creating something with an edge, that was had a narrative set up over each week and would be original as well as within the zeitgeist. However what has occurred is that both their sensibilities have been run through the corporate machine as well as network television to offer a show that is actually a little dull and hardly noticeable apart from all the other network shows on air.

To combat this the producers have upped to elements within the show through casting as well as who directed the first two episodes. Firstly the show has cast up with new faces in lead roles as well as experienced character actors in support roles which assists giving the overall plot some kind of believability for the audience to hang onto in the more fantastic elements while exposing relatively new actors to events in the place of the audience. Secondly bringing in a director, Neil Marshall, who is a film director to set the show up with a look and feel that can be followed through on with other directors who have a blueprint. However, again where both of these elements have fallen down is that they have all been filtered through a network and in case you missed it the least relevant shows are on networks. Maybe this show should have gone to Netflix or another service, if only someone could go back in time and change that.

The War to End All Wars: As Rufus and Wyatt prepare to get Amy back, Mason Industries is bombed. They survive and Agent Christopher relocates them to a decommissioned nuclear bunker. Six weeks later, Lucy—now seemingly integrated into Rittenhouse—joins Carol and Emma in traveling to the Battle of Saint-Mihiel, France on September 14, 1918, to save injured soldier Nicholas Keynes.

The Darlington 500: The Lifeboat team follows the Mothership to September 4, 1955 in Darlington, South Carolina after Flynn gives Lucy a tipoff about a Rittenhouse-affiliated address. They discover that Rittenhouse is after NASCAR race driver Ryan Millerson, who is scheduled to race at the Darlington 500. At the track, they realize that Millerson is the sleeper agent right before race car driver Wendell Scott saves them from being killed by Emma.

Hollywoodland: The Lifeboat team travels to January 2, 1941 Los Angeles, where Rittenhouse sleeper agent Lucas Calhoun, an RKO Pictures producer, steals the only existing copy of Citizen Kane and offers it to William Randolph Hearst in exchange for a weekly column in all Hearst Communications papers, allowing Rittenhouse to manipulate history using propaganda. With the help of actress and inventor Hedy Lamarr, the trio kills Lucas and recovers the film.

The Salem Witch Hunt: Seeing Lucy as an ideological threat, Nicholas orders Carol to kill her. Jiya tells Rufus of her premonition that he will kill 17th-century judge Samuel Sewall. Wyatt tells Lucy that Jessica is alive. Rufus attributes it to recent Rittenhouse activity in 1980. Lucy, Rufus, and Flynn take the Lifeboat to September 22, 1692 in Salem, Massachusetts, where they discover that Abiah Franklin, the future mother of Benjamin Franklin, is slated for execution in the Salem witch trials.

The Kennedy Curse: Flynn stops a Rittenhouse sleeper agent from killing 17-year-old John F. Kennedy in 1934. To escape other agents, Wyatt and Rufus bring Kennedy to 2018. Kennedy flees before the Lifeboat is recharged. He hitches a ride with some college students, but is soon hospitalized with stomach pains. Carol captures Agent Christopher and, before releasing her, demands she protect Lucy by keeping her away from Rittenhouse’s missions.

The King of the Delta Blues: Rufus and Jiya add a fourth Lifeboat seat. Mason loses his company. Lucy, Rufus, Flynn, and Mason follow the Mothership to San Antonio, Texas on November 23, 1936 to save Mason’s idol, blues musician Robert Johnson, thereby preserving rock and roll and the 1960s counterculture revolution. The team saves Johnson from a Rittenhouse sleeper agent, but Johnson flees, believing himself cursed.

Mrs. Sherlock Holmes: Lucy, Wyatt, Rufus, and Flynn follow the Mothership to New York City on March 4, 1919, where Rittenhouse frames suffragist Alice Paul for murder on the day she persuaded Woodrow Wilson to support the Nineteenth Amendment. Lucy and Wyatt enlist attorney and sleuth Grace Humiston, who disapproves of advocacy, to prove Paul’s innocence, but Paul is murdered in her cell. Emma violates Nicholas’ orders and instead helps Rufus and Flynn stop the sleeper agent, who is masquerading as a suffragist.

The Day Reagan Was Shot: Lucy, Wyatt, Rufus, and Jiya travel to Washington, D.C. on March 30, 1981, the day Ronald Reagan was shot. The team discovers that Rittenhouse is after a young Denise Christopher, then a rookie cop. Denise is injured and her mother urges her to give up police work and accept an arranged marriage. To change Denise’s mind, Lucy and Jiya help Denise capture a fugitive John Hinckley Jr., then reveal themselves as time travelers, showing her photos of her family.

The General: Lucy, Wyatt, Rufus, and Flynn follow the Mothership to South Carolina on June 1, 1863, where Rittenhouse sleeper agent Confederate Colonel Ryerson uses a history book provided by Emma to outmaneuver Union troops and drive away Colonel James Montgomery and his forces. Wyatt and Rufus work with Harriet Tubman to orchestrate a plantation raid similar to the original Combahee River Raid, while Lucy and Flynn convince Montgomery to reinforce Tubman.

Chinatown: Jiya kills her Rittenhouse guard and flees in the Lifeboat. Sedated, and with the vessel damaged by Emma’s gunfire, Jiya fails to land the Lifeboat in the bunker. Lucy discovers a photograph of Jiya in Chinatown, San Francisco, dated 1888. Jiya’s message in Klingon provides the Lifeboat’s location and an exhortation not to come for her. Lucy, Wyatt, Rufus, and Flynn nevertheless travel to 1888. When Carol prevents Emma from killing Lucy, Emma kills Carol and Nicholas, taking on Jessica as her new partner. A dying Carol tells Lucy she regrets taking Amy from her and not raising Lucy to believe in Rittenhouse.