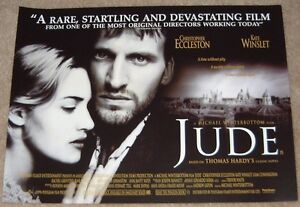 Jude Fawley: “We are man and wife, if ever two people were on this earth.”

This month sees the re-release on DVD of the adaptation of the Thomas Hardy novel ‘Jude the Obscure’ (1895), a now classic that sits in the oeuvre of both the screenwriter, Hossein Amini, whose first project this was as well as director, Michael Winterbottom which at the time was his biggest and boldest project especially considering his own origins in the independent cinema world. This film, “Jude” (1996), would exemplify what has become a trademark of Winterbottom’s own style and method, those being originality, a lack of sentimentalism, trust and an eye firmly on the future. “Jude” also cemented Winterbottom as someone to keep an eye on as he not only had a talent for spotting subject matter, but also in working with established and up and coming talent in new and original ways, which he still does to this day, one needs only look at his work since in a variety of genres, mediums and narrative difference. This story also can be seen as being appealing to the director as this is the story of a stonemason who dreamed of becoming a scholar, but was crushed by the British social system, by fate and by his own luck.

Winterbottom has never been a director who looks for the easy answer in his work which explains his longevity as well as his varied movies from genre to genre and medium to medium which is the reason “Jude,” an angry saga that just barely manages to find a bittersweet ending by overlooking the novel’s final pages–which are even grimmer, if you can believe it, than the sad events we see on the screen. The novel argues that with society and conventional morality arrayed against you, there’s not much you can do, whether or not Winterbottom believes this or not.

The film’s tone is set in the opening black-and-white sequence, where Eduardo Serra’s photography places a premium on darkness as well as long shots which tend to up the atmosphere as well as a hint of what is to come in terms of the plot.

“Jude” as a film works on many levels, it is a great adaptation as it speaks to some of the elements that we face today, in terms of politics, society as well as technology where we see that perhaps Hardy was tilting his writing to the future without him even realising it. To say that this was a story ahead of Hardy’s time is easy to see, what is more complex is that the film itself was far ahead of its own time even though that was not even thirty years ago.

Not only that but the casting of Christopher Eccleston, Kate Winslet, Liam Cunningham, Rachel Griffiths and James Nesbitt was not only ingenious but would herald a group of actors, some of whom had already had some measure of success, but here would all prove themselves capable of handling very heavy and heady material without needing to try to hard to create a veneer of plausibility of a story that would be vital in Hardy’s oeuvre and his last full length novel, a travesty if ever there was one.

If you have not seen this film or not seen it in a while then it demands to be revisited, not only that it should sit in anyones collection, my only issue is that it would have been preferable on blu-ray.