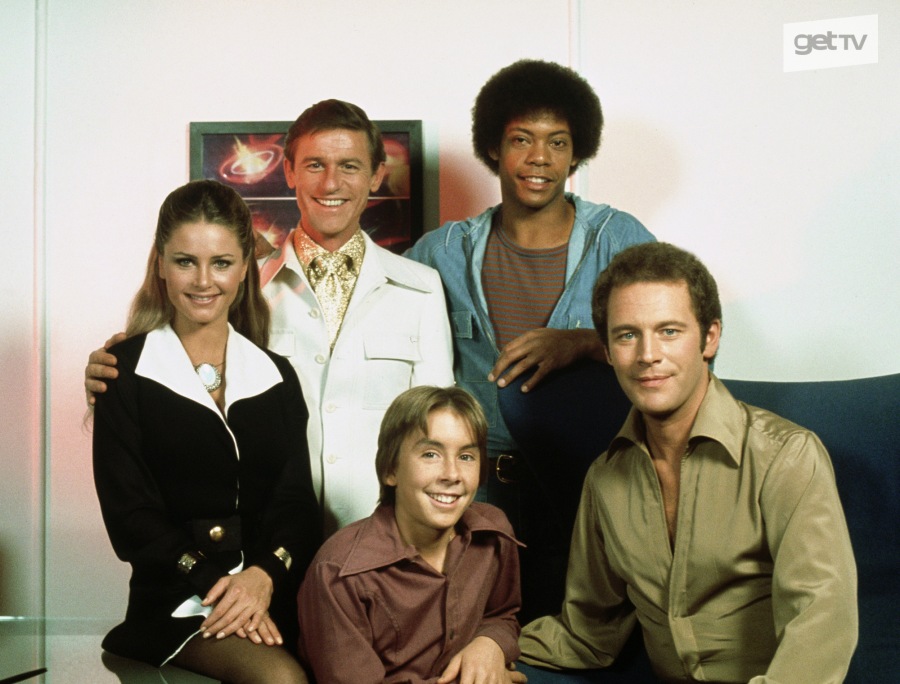 Narrator: “Lost in the Devil’s Triangle, trapped in a dimension with beings from the future and other worlds, a party of adventurers journey through zones of time back to their own time. Varian, a man from the 23rd century, possessing awesome powers; from 1977; Fred, a young doctor just out of medical school; Scott Jordan, the thirteen-year-old son of a famous scientist; Liana, daughter of an Atlantean father and an extra-terrestrial mother; and Jonathan Willaway, a rebel scientist from the 1960s. Together they face the frightening unknown on… The Fantastic Journey.”

This month sees the release of a short-lived sci-fi television show, “The Fantastic Journey” (1977) which while brief onscreen does contain much that has been echoed over the years as well as influencing at least one hit show of the noughties most obviously “Lost” (2004-2010) which was influenced by the politics of its time much like that long dead series.

However, what has become apparent is that many of these shows like the films of their times have real meanings buried within them whether it is the rising tide of the media as a tool for mass consumption as well as the oncoming era of consumerism, the Regan era politics that would define the 1980s, the paranoia that would not only start in the 1970s but would reach forward to the new millennium. The last aspect is the influence on young show runners, producers and creators that would take much of the idea of these shows and move them into new modern settings. It could be said that we owe much of what we see today to these late 1970s series that would plant the seeds of distrust, paranoia, conspiracy and technology much like “Star Trek” (1966-1969) was able to do a decade earlier.

The series concerns a family and their associates who charter a boat out into the Caribbean for a scientific expedition. After an encounter in the area of the Bermuda Triangle with an unnatural luminous green cloud accompanied by the eerie disembodied sound of ship’s bells, the group find themselves shipwrecked on a mysterious uncharted island from which they are unable to escape.

They encounter Varian (Jared Martin), initially disguised as an Arawak native, who is later revealed to be from the year 2230. A 23rd-century pacifist, musician and healer, Varian explains to the travelers that, like he and many before them, they have been caught in a space/time continuum where people from the past, present, future and from other worlds are trapped, co-existing on the island in a series of “Time Zones”. The only way home can be found in a place called “Evoland”, which lies “far to the rising sun”. (It was indicated in interviews of the time that Evoland was also the name of the island.) The only way to travel between Time Zones is via invisible gateways that instantaneously transport individuals or groups from one zone to another. In one episode “Beyond The Mountain” the group also encounters a second cloud, which has much the same effect, but which also splits up the group.

The series, for its time, was well cast with the always amazing Roddy McDowall who at this stage go his career was appearing in more television than film which was a loss to cinema but he was always a professional so here he plays his part perfectly. The other major part was played by Jared Martin who was not only a stalwart of television but of the sci-fi genre specifically, he would later go on to star in the underrated genre show “War of the Worlds” (1988-1989).

Atlantium, Pilot, Vortex:A party of scientists disappears into the Bermuda Triangle and becomes trapped on an island where past, present and future co-exist. After meeting 23rd century healer Varian and encountering 16th century privateers, the survivors begin their quest to return to their own time. All the while, they are being observed by a mysterious man from a futuristic city in the desert.

Atlantium (Part 2):With many of the original party returned to their own time, Varian, Scott and Fred find themselves caught up in the machinations of a megalomaniacal “brain in a box” called The Source, which has enslaved the inhabitants of the city of Atlantium (actually the Westin Bonaventure Hotel in Los Angeles), built by the survivors of the original Atlantis and intends to use Scott’s life force to regenerate itself. The trio are aided by dissident Atlantean, Liana, who reveals that she is half alien.

Beyond the Mountain:The travelers are separated by a red cloud which leaves Liana as the ‘guest’ of Jonathan Willoway, who is the master of a utopian community of golden-garbed androids, and the others trapped in a dark swamp surrounded by shaggy, green-skinned humanoids. However, Willoway’s intentions are less than honorable and he has no intention of letting Liana leave, while Fred’s medical skills prove invaluable in discovering the truth.

Children of the Gods:The travelers arrive in a new Time Zone and meet a young boy who has escaped from a community inhabited solely by children led by the bullying teenager Alpha.

A Dream of Conquest:An alien dictator, Tarant, is planning to invade other Time Zones and conquer the island. Willoway pretends to agree with him so that he can learn Tarant’s secrets, especially as the true leader of this alien community is being slowly poisoned by the would-be dictator. Meanwhile, Liana takes pity on an abused furry creature called the Nefring.

An Act of Love:Varian, under the influence of a love drug, meets a woman named Gwenith from a religious community in a geologically unstable Time Zone. His judgment impaired, Varian decides to leave the travelers to stay and marry her. He soon discovers that the community fanatically worships a volcano god called Vatticus, who demands human sacrifices.

Funhouse:Arriving at a strange, seemingly abandoned 20th century funfair, the travelers become part of a game played by an ancient Greek sorcerer named Apollonius who, with the help of a female werewolf, plans to possess Willoway’s body so that he can escape his imprisonment.

Turnabout:The travelers encounter a city where the women are subservient to brutish male authority. The women mutiny and imprison the male travelers in a strange black void, and Liana appears to join their cause.

Riddles: Guided to an old house by a mysterious mounted messenger, the travelers – minus Liana – quest for an object that will assist their search for Evoland, and a strange couple conjures illusions drawn from their deepest fears.

The Innocent Prey:A prison craft from Earth’s future crash lands in the Time Zone where the travelers are resting, releasing two prisoners, a convicted murderer and a thief, into a community of stranded humanoid aliens that does not comprehend violence or the concept of doors and locks. With a killer on the loose scheming to abscond with an orb that gives the aliens psychokinetic powers, Varian and the others must deal with him and protect the pacifists.