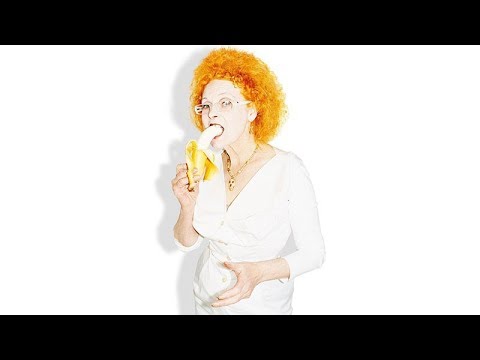 Vivienne Westwood:“This film about me is mediocre. I am not.”

This week we see the release of one of the more oddly put together documentaries from last year on DVD, that is the average “Westwood: Punk, Icon, Activist” (2018). This last year has been a milestone for documentary films that not only been released into cinemas but have been attended in record numbers by audiences all over the world. However with this movie we see where a paint by numbers narrative can really suffer when dealing with a subject like Vivienne Westwood who is so much bigger than this rather plodding documentary that has been made up with a cut and paste narrative, that has at its spine a rather average interview with the subject herself.

There has been no doubt at all that this year has been an excellent year for documentaries not only on streaming or DVD but in cinemas which is a trend that goes against what many people may have expected. However I find this to be exactly what should be expected especially with the concentration of so-called ‘fake news’ that now exists on the internet, coupled with what has been coming from the White House under the Trump Presidency. In fact there was a thought that cinematic documentaries might be a thing of the past especially with the success as well as saturation of Disney-fied blockbusters invading multiplexes, in fact audiences have been flocking to cinemas to seek out stories about real people making real differences in times and places where many others have been marginalised and made powerless by the people in charge in their respective times. Some of the great, as well as critically received, not forgetting making money documentaires at the box office are: “Wont you be my neighbour?” (2018), “Three Identical Strangers” (2018), “Jane” (2018),  “McQueen” (2018), and my personal favourite “Bombshell: The Hedy Lamarr Story” (2017) with so many more. What this says about audiences is that they will seek out true stories told in the relative first person that are not only inspiring but are direct counter programming to the politics of the day as well as the lies that are being produced by a President who is not only artificial but hate fuelled. My belief as a fan of documentaries is that this genre will only gain in popularity, with the coming years being a boon as well as revealing the importance of truth in the media as well as the importance of researching decisions made by the electorate. It is no surprise that the rise in fake news, Donald Trump, racism and may other hate fuelled elements has been answered by artists creating documentaries that prove there can be positive outcomes when people choose to buck the system as well as believing in others, differences, freedom and most of all, love.

This documentary has only covered what fits into the interview given by Westwood which means it is extremely subjective offering only what the subject wants to talk about all the while being quite ornery about having to talk about herself. The interview for the most part is interspersed with archival footage from awards shows, interviews, news footage and a variety of other sources, which is one of the great weaknesses of the movie and makes for a rather disjointed and completely enjoyable experience. Westwood who is almost eighty years old has never felt the need to have an in depth discussion about her own life, her accomplishments as well as an explanation of what she does, an insight into her first love, that is designing first and becoming a cause célèbre for the environment, which to me seems like she has come late to that particular party.

Make no mistake in watching this film, it is an orchestrated piece of non-fiction but with some very large gaps in the designer’s own narrative, it is carried out as well as performed professionally as well as what could be deemed as a cold manner. There is very little of value filmed for this outside of the interview setting, which takes place in a very orchestrated and boring kind of way, which considering the subject is a mjor letdown and might speak to the talent of the director. What is really missing is some grit and purpose as well as some spark of an overarching narrative with some dissenting voices, all we get constantly are people backing up Westwood’s own story which if you know anything about her past is full of contradictions. The only time when there is a hint of reinventing her past is when she references two people Malcolm McLaren and John Lydon. I think it is telling that she completely throws McLaren under the bus especially in terms of their relationship when he has no comeback at all as he dies a few years ago, which any director should have challenged her on or at least had some dissenting opinion. Then in reference to Lydon she makes an off handed remark about him not changing which is untrue especially if you look at his career since the “Sex Pistols”, of course there is no dissenting opinion on that either, but a lot less is said about him.

Westwood who is now a Dame is primarily known as a British fashion designer and businesswoman, largely responsible for bringing modern punk and new wave fashions into the mainstream. Westwood came to public notice when she made clothes for Malcolm McLaren’s boutique in the King’s Road, which became known as “SEX”. It was their ability to synthesise clothing and music that shaped the 1970s UK punk scene, dominated by McLaren’s band, the “Sex Pistols”. She was inspired by the shock-value of punk—”seeing if one could put a spoke in the system”. Westwood went on to open four shops in London, eventually expanding throughout the United Kingdom and the world, selling an increasingly varied range of merchandise, some of it linked to her many political causes such as the Campaign for Nuclear Disarmament, climate change and civil rights groups. Westwood is married to her former fashion student, Austrian Andreas Kronthaler.

If there is one thing you do not want to do when making a documentary about Vivienne Westwood is make it bland and boring which is what this ends up being. Instead of using footage that many would have seen before you need to as a director either film some inspiring footage yourself or dig deep with researchers and find footage no one has ever seen before. The other thing is to find interview subjects that really add something to the overall narrative instead of husbands, sons and co-workers; I for one cannot think of anything more reductive than that in a feature movie documentary. A great example is last years “McQueen” that not only had interviews from the subject that had never been seen but it had people talking about him not always in a good light and that was a great documentary.

Its funny but I would still recommend this documentary to watch once but it is nowhere good enough to add to any collection, if you get a chance to see on a streaming service or on television then it is entertaining but it will not stay with you once the credits roll.