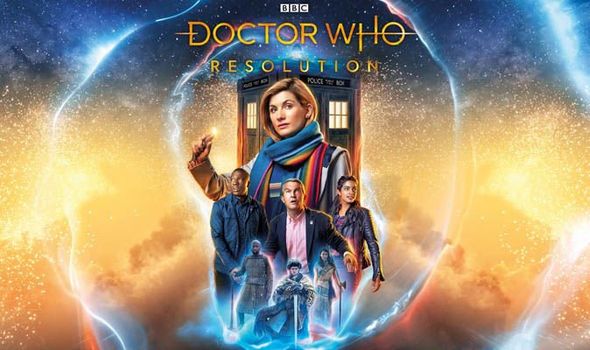 After ten regular season episodes of the brand new ‘Doctor’ we now have something that breaks from tradition in the moving of the regular Christmas episode to New Years Day, with “Resolution” which for me was long overdue. I had been tired very quickly of Christmas themes every year into the special, the first few were fun but quickly ran out of steam so this move for me is a welcome, it also fits well with timing with the casting of Jodie Whittaker, whom I have said I enjoy as the ‘Doctor’, she brings some much needed energy as well as little or no baggage, she is a breath of fresh air for the series. So far the ten episodes have been extremely uneven, as I have said previously there have been no memorable antagonists, they have all been immediately forgettable as well as weak, not thought through and have played no major part of any real solid narrative.

The new Doctor armed with her new friends by now all know each other very well, which is exactly where they should be at this stage in their relationships. Not only that, but this is the first episode where I felt all the heavy lifting had already been done, so we could now enjoy an episode, a one off, where it was all going to be out the antagonist, which for once was exactly what we received, not only that but this is a classic villain which is definitely the best one of the series so far. In mind it is not a coincidence that the best bad guy so far has been on not of the writers/producers creations, but one that is over fifty years old, this fact is telling in and of itself.

One of the strengths that Chris Chibnall brings to the show, is the ability to cast characters extremely well which is not only bourne out by the main cast but by all the excellent guest stars we have seen over the first ten episodes.   This episode is no different, casting a comedian in the form of Charlotte Ritchie who here actually plays a serious role with a twist, in fact for half the episode plays a Dalek, then for the rest disappears into the background to be one of the Doctors friends for this instalment, anyway. This is a multilevel part that is played well, my only gripe is that it may have been interesting to take this part the entire way, making it a ‘Puppet Master’ episode that this was obviously based on, thank you Robert A. Heinlein. It is telling that the only original part of the narrative is borrowed from one of the all time classic sci-fi stories from one of the icons in the field. I understand the writers wanting to move the Dalek story forward, but my only question is couldn’t you have created something original, not relying on what is an obvious sci-fi trope.

Audiences both old and new in this age of peak viewing need a reason to hang around week after week, the only way to do that is to make them return to see what happens next in the plot as well as, hopefully, in an overarching narrative. Now while I am not a fan of heavy serialization in my television I think a page out of the Tennant era is required, that is a light narrative that loosely connects a season together with some revelations made in the final few episodes – this is something that is not happening as of yet for entire season. How do these comments fit into this New Years special? Well as I have stated it is a seperate thing altogether, although it does link nicely into the ongoing narrative of Graham and Ryan, this time not referring to their now dead wife and Gran respectively. We are now introduced to Ryan’s absent Father who wants a relationship with his son, of course he does that as well as helping save the day. Now it is time to put a full stop on the friends stories and made this about the titular character, ‘The Doctor’.

“Resolution”, for me, was a very good episode, it did not include any moralising or any trips to the past, there was nothing heavy about it in the slightest. This was a fun episode that included one of the top bad guys from the entire history of “Doctor Who” which has been a long time coming, we could have done with this episode half way through the season, it would have broken the ten episodes up nicely. This was not a great episode but is one of the best of the season, it fits above all of Season 11 but below “Rosa”, “Demons of the Punjab” and “The Witchfinders”, these are the best so far.

My hope remains that in that next the season will be another step up, follow through on some of the early promise as well as making the show relevant, not forgetting that it is a sci-fi show first that operates on the fact that the central character is a Timelord who is not only one step ahead of her friends but also knows instinctively what is going on around her, think back to not only classic Who but also the very best of new Who as well.

As the New Year begins, a terrifying evil is stirring from across the centuries of Earth’s history. As the Doctor, Ryan, Graham and Yaz return home, will they be able to overcome the threat to planet Earth?