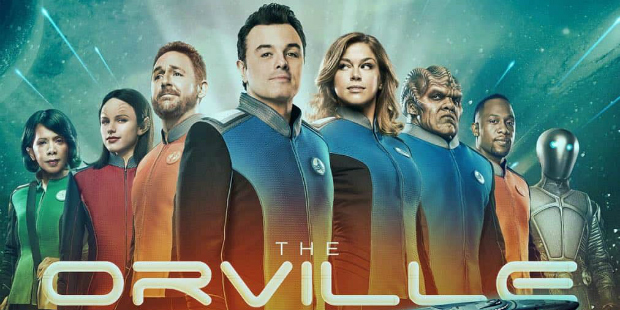 Ed Mercer:[seeing the Orville] “Is that it? It’s not bad, right?”

Gordon Malloy:“No, it’s good. You paint some flames on the side, maybe, like, a rainbow unicorn, you got something.”

Released on DVD this month is the latest series from Seth MacFarlane who has turned his unique brand of humour into not only a television show with the long running “Family Gut” (1999-present) but has also written and directed three movies in “Ted” (2012), “Ted 2” (2016) and “A million ways to die in the West” (2016) which have all met with various degrees of success. MacFarlane who is an atheist, which in various guises does show up in all of his work, was also a co-producer on the rebooted version of Carl Sagan’s “Cosmos” (2015-present), which is entering its second season much like his Trek homage “The Orville” (2017) which was somewhat of a surprising success story for the Fox network. The success is surprising as McFarlane creating a “Trek” like show is not original at all, in fact it has been the target of copies, homages, reboots, reinventions and satire ever since it first aired in the 1960s. There have been far too many to list but some of my favourites are the great “Galaxy Quest” (2001), the recent “Black Mirror – USS Callister” (2017) and of course “Star Trek Discovery” (2017-present), I would definitely add this versions well, mainly because of the humour but also the addition of what makes science fiction such a great genre, that is the asking of questions that reflect our life we live in this very moment.

The Orville is set on the titular U.S.S. Orville (ECV-197), a mid-level exploratory space vessel in the Planetary Union, a 25th-century interstellar alliance of Earth and many other planets.

Old Wounds:25th-century Union command officer Ed Mercer divorces his wife, Kelly Grayson, after catching her cheating on him. A year later, he accepts a position as captain of the U.S.S. Orville, a mid-level exploratory vessel, and learns to his dismay that his ex-wife has been assigned as his First Officer.

Command Performance:The technologically advanced Calivon imprison Mercer and Grayson in a replica of their former home as a zoo exhibit. Alara is left in command of the Orville, as Bortus has laid an egg and must incubate it. Alara is unsure of herself, but gains confidence with the help of Claire’s mentorship. Mercer and Grayson wonder if they could have made their relationship work, but finally conclude that they were never compatible for a long-term romantic relationship, despite their strong camaraderie.

About a Girl:When Doctor Finn refuses Bortus and Klyden’s request to have their daughter undergo sex reassignment surgery, which is standard practice for Moclans on the very rare occasions when a female is born, the parents petition Mercer to order the procedure. Mercer refuses, as he (and the rest of the crew) object to performing such a procedure on a healthy infant, so Bortus and Klyden arrange to have the procedure performed on a Moclan vessel. Gordon and John change Bortus’ mind by showing him Rudolph the Red-Nosed Reindeer, but Klyden still wants to proceed, revealing that he was born female.

If the Stars Should Appear:The Orville encounters an immense, 2000-year-old derelict ship drifting into a star. Mercer, Grayson, Kitan, Finn, and Isaac enter, discovering an artificial biosphereand a civilization of 3 million who worship an entity called Dorahl, and do not know they are on a ship. Grayson is held prisoner by their theocratic dictator Hamelac, who imposes a death penalty on “Reformers” who believe anything exists beyond the known world. While Bortus takes the Orville to save a colony ship from a Krill attack, Grayson’s crewmates rescue her and lead a group of Reformers to the alien ship’s bridge. An ancient recording from Captain Jahavus Dorahl (played by Liam Neeson) reveals that it was a generation ship disabled by an ion storm.

Pria:The Orville saves Captain Pria Lavesque (played by Charlize Theron) from her imperiled mining ship. The beautiful Pria charms Mercer and others of the crew, eventually sleeping with Mercer, his first romance since Grayson. Grayson is suspicious of Pria, whose supposed employer doesn’t check out, and enlists Kitan to investigate; they find a mysterious device in her quarters, but Mercer reprimands them. Pria saves the Orville from a “dark matter storm,” but later hijacks the ship, using the device. She is a time-traveling 29th-century artifact dealer; history records the storm destroyed the Orville, which she transports to the future via a wormhole for her client, a collector.

Krill:After recovering a Krill shuttle intact, Mercer and Malloy are ordered to pose as Krill soldiers in order to board one of their vessels and get a copy of the Ankhana, a sacred religious text. They are forced to change priorities when they learn that the Krill plan to detonate a powerful bomb over a remote Union colony.

Majority Rule:An undercover team led by Grayson lands on Sargas 4, an Earth-like planet with a culture similar to that of 21st-century human civilization, to locate two missing anthropologists. There, LaMarr is arrested after a video of him dancing with a beloved statue receives more than a million “down” votes, and must convince the public to pardon him or be subjected to “treatment” for his actions.

Into the Fold:While traveling to a recreational planet in a shuttle, Isaac, Finn, and her sons Marcus and Ty fall into a spatial fold, and crash on a planet a thousand light-years away from their original location, devastated by famine and disease, and populated by cannibals. Finn is separated from the other three when the shuttle breaks in half while she is in the back carrying out repairs, and is captured by a survivalist named Drogen. While she works to escape, Isaac, who is unfamiliar with the care of human children, is forced to protect her sons while he tries to fix the shuttle’s communication systems in order to send a distress signal. Ty becomes ill with the planet’s indigenous disease.

Cupid’s Dagger:The Orville is dispatched to mediate talks between two alien species, the Navarians and the Bruidians, who have been at a centuries-old stalemate over which race lays proper claim over the planet Lapovius. Also assigned to the matter is Darulio (Rob Lowe), the Retepsian whose affair with Grayson a year prior ended her marriage to Mercer, to scan an ancient artifact from the planet for DNA to reveal which species was the original inhabitant. Unbeknownst to the crew, Darulio secretes a sex pheromone as part of his mating cycle, which affects the crew resulting in trysts between Darulio and Grayson, Darulio and Mercer, and Finn and Yaphit.

Firestorm:When Lt. Payne is trapped beneath debris during a plasma storm, Alara’s pyrophobia causes her to hesitate, and after he dies, she blames herself. Mercer declines her resignation and suggests she discover the cause of her pyrophobia. She learns from her parents (Robert Picardo and Molly Hagan) that, as an infant, her mother fell asleep cradling her when a fire broke out in the kitchen. Alara’s cries woke her up just in time to save them both. Soon, the Orville encounters strange phenomena, including a scary clown, a giant spider that eats Malloy, and murderous versions of Finn and Isaac.

New Dimensions:With Lt. Newton leaving the Orville, Mercer must find a new Chief Engineer. Although Yaphit is next in line for the position, Cmdr. Grayson discovers that LaMarr has been hiding intellectual gifts, stemming from wanting to be better accepted as a child growing up in his community. Grayson convinces Mercer to assign LaMarr to lead an engineering team assignment, in order to evaluate him as a candidate, but when Mercer learns that Grayson similarly pushed for Admiral Halsey to consider him for the Orville’s captaincy, he becomes wracked with doubt and resentment, despite Grayson’s insistence that he was granted his position on merit and Halsey’s confirmation that Mercer’s performance on the ship has borne this out. Meanwhile, the Orville encounters a thief with a cache of plasma rifles stolen from the Krill, who is killed when he passes into a region of two-dimensional space.

Mad Idolatry:Grayson leads a shuttle team that crashes on a suddenly appearing planet with a Bronze Age society. After leaving, the crew discovers that the planet phases in to our universe for a short time every 11 days as 700 years passes on the planet. They discover that their first visit has resulted in a religion that worships Kelly Grayson and has grown into a theocracy resembling Earth’s middle ages. Admiral Ozawa reprimands Mercer for omitting mention of the contamination, and orders no further contact with the planet. Mercer and Grayson defy this order by returning to the planet to inform the society’s religious leader of the truth, but a subordinate assassinates him.