Capt. Steve Burton: “To the park on the edge of the city. Fitzhugh and the others have hit Fort Knox. They’ve spotted some giants with cameras.”

“Land of the Giants” (1968-1970) was set fifteen years in the then future year 1983, the series tells the tale of the crew and passengers of a sub-orbital transport ship named Spindrift. In the pilot episode, the Spindrift is en route from Los Angeles to London, on an ultra fast sub-orbital flight. Just beyond Earth’s boundary with space, the Spindriftencounters a magnetic space storm, and is dragged through a space warp to a mysterious planet where everything is twelve times larger than on Earth, whose inhabitants the Earthlings nickname “the Giants.” The Spindrift crash-lands, and the damage renders it inoperable.

This week sees the release of an updated DVD set of the now classic but short lived “Land of the Giants” (1968-1970) while not as well remembered today as “Lost in Space” (1965-1968) or “Voyage to the Bottom of the Sea” (1964-1968), “Land of the Giants” is an entertaining show that has all of the characteristics that made Irwin Allen productions so popular. It has large scale problems, better than average special effects, fantastic story elements and is basically a lot of fun. What worked well in those previous shows probably would have worked in this one had it not been for a little film that was released  just as those previous shows were ending and this one was beginning, that being “2001: A Space Odyssey” (1968).

That aside, one of the reasons that this series works so well are the special effects. They did an excellent job at making the actors appear six inches tall. Placing the camera on the floor and filming at unusual angles matched with some good editing gave the feel that the crew really was menaced by giants. They also used a lot of matte shots and double exposures to have giants appear in the same frame as little people, and made sure that the props the little people had matched the same items when giants were using them. Even today its impressive how well they were able to get the different scales to mesh almost seamlessly.

Like all of Irwin Allen’s TV shows, this one starts off really strong and goes downhill as the seasons progress. The first 12 episodes were filmed in 1967 as a midseason replacement. They weren’t needed by the network, so the debut was pushed back from January of ’68 to September of that year. These first twelve shows were easily the best of the lot. They include, along with the excellent origin story The Crash, the great episode Ghost Town.

As the first season progresses the show loses some of its luster, but they are all fun in one way or another. It is in the second season that things really start to go downhill. The budget was considerably less for the second set of shows and Heather Young (Betty) became pregnant and is missing from several shows (and only puts in brief appearances in others) but that doesn’t explain some of the bad scripts. While there were still some very solid shows, including Doomsday where a doctor plans to blow up the giant city and The Clones which is one of the best episodes of the series, the overall quality declines.

In terms of the environment the show was set in very little is known about the home planet of the Giants. This is partially because the Spindrift crew very seldom leave the area where their spaceship crashes. No name is ever established for the mysterious planet, but the inhabitants seem to know of Earth, Venus and Mars, referring to them by name in one episode. Exactly where the planet is located is also never made clear. In the episode “On a Clear Night You Can See Earth,” Captain Steve Burton (Gary Conway) claims to have seen Earth through a set of infrared goggles invented by the giants, implying that the two planets are near enough to see one from the other. The only established method by which Earth people may reach the giants’ planet is high-altitude flight, passing through what one giant calls a “dimension lock”.

Although various episodes establish that at least six other flights have landed on the planet, no episode confirms anyone ever returning to Earth. One continent, or hemisphere, is dominated by an authoritarian government which tolerates full freedoms within a capitalist system, but it does not tolerate any effort to effect political change. Exactly what the political situation is on other continents is not known, although at least one overseas land has a despotic ruler. The Air Traffic Control tells those who venture out to sea that they should turn back, that nothing beyond that sea has been explored nor is there current contact; whether this is an official government line or the truth is not known.

Culturally, the Giant society closely resembles the contemporary United States of 1968. The Earth people find themselves able to cope, and their efforts to get around are facilitated by the ubiquity of large drains leading directly from interior rooms to the pavement, in an outside wall of most buildings. The Giant government has offered a reward for the capture of the small Earth people.

In spite of the authoritarianism, there are several dissident movements at work that either help other dissenters (such as the Earth people) or are actively working to unseat the ruling party. The government has established the SID, Special Investigations Department, to deal with assorted dissidents but it also takes the lead in dealing with the Earth people. The Giant technology mostly resembles mid-20th century Earth, but inconsistently: significantly more advanced in some episodes and slightly behind in others.

The little people’s objectives are: (1) survival, by obtaining food and avoiding capture by the Giants or attacks from animals; and (2) repair of their spacecraft, so they can attempt to return to Earth. They do not achieve the second objective, as the primary systems of the craft are severely damaged. The secondary systems are insufficient to enable them to achieve the sub-orbital flight required. They are unable to use Giant technology, as it is bulky and less advanced.

They are aided in the first goal, and at least somewhat hindered in the second, by the leadership of Captain Burton. He behaves as a leader, and as protector to the passengers and crew, and his leadership has rescued them from some difficulties. But Burton also tries to keep the Giants from ever reaching Earth. In several episodes, Burton puts keeping the Giants away from Earth above the need to get his people home. At the end of those episodes, he destroys devices that would get the Spindrift back to Earth but which would probably enable the Giants to journey there too.

The show had no proper conclusion about the humans’ attempts to return to Earth, and the final episode was a universal tale that could have taken place anytime in the second season. 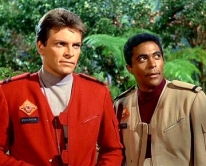 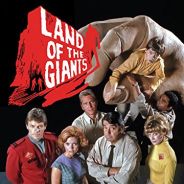