This new movie co-written and directed by the great Richard Linklater is not something that you might immediately expect from him after his last two films, the Oscar nominated “Boyhood” (2014) and the absolutely under rated Everybody wants some!!” (2016) – which were deeply personal as well as unique, with their take on very different parts as well as times of America. That is not to say that this new movie, “Last Flag Flying” (2017) is not, but it does touch on elements that Linklater has never addressed, the US military, getting old in America, death as well as Americas obsession with war – fighting enemies that the US has no reason trying to dominate. It is always fascinating viewing Linklater’s movies in terms of his craft, as well as what he is saying about life in both general as well as specific terms.

Linklater has crafted a movie that acts as a time capsule, for a period in the US when the shadow of the terror attack on 9/11 is still fresh, as well as all the mistakes made then by the Bush administration, the price being paid by people who are innocent, trying to contribute to efforts that end up being false. Linklater looks back at events over fifteen years ago through the eyes of Vietnam veterans who are living in a time that echoes their own pasts, with one of them paying a price that should never have been paid. This movie attempts to ask more questions than it answers by posing them through the plot as well as character traits of the three main protagonists, using a road movie narrative to keep the pace moving along – a wise decision made as this could have been mired in nostalgia over two troubled time periods.

Set in December 2003, Larry “Doc” Shepherd (Steve Carell) visits the bar of Sal Nealon (Bryan Cranston), a former Marine that he served with in Vietnam. After a wild night Sal and Doc drive to the church of another friend from Vietnam, Richard Mueller (Laurence Fishburne), where he is the pastor. At Mueller’s house that evening, Doc reveals that his wife had recently passed away, and the purpose of his trip was to ask his friend to accompany him to retrieve and bury his son, Larry, who had recently been killed in Iraq. Sal agrees, while Mueller is initially reluctant to leave; at the insistence of his wife he eventually agrees and they begin the trip to Washington DC.

This is a very special film with memorable actors that are all performing at the top of their games. This is enhanced by the fact that they are being directed by someone who is, surely, one of the greatest (possibly underrated) as well as prolific American directors working today. This director has proven time and again that he has a rare insight into not only people but also the American landscape through very different time periods. This is something rarely seen with writer/directors but with a career spanning over four decades Linklater is always searching for the next story.

Over the last decade as some prominaent male actors reach their sixties, seventies and eighties there have been a number of ‘old men’ movies that started with “Wild Hogs” (2007), which was a huge hit, and is directly traceable to “Last Flag Flying”. In saying that none of those movies have dealt with the themes that Flags has, which adds another level to this new genre, in my mind a welcome one.

The central casting of the three main characters is actually quite inspired as well as being obvious once you view the film. These actors are all multi talented having anchored almost every genre going, as well as being in touch with the politics of this piece. The central character of ‘Doc’ played by Steve Carell is the emotional heart of the film as well as the central aspect driving the plot, as well as the narrative, he is the one that has to make many decisions as well as corral the other two players, Richard (Laurence Fishburne) and Sal (Bryan Cranston). These are three quality actors in roles that while spelt out on the page bring to life real three-dimensional characters that are affected by not only their own distant pasts but also the recent one that is having terrible repercussions not only on their present but ours as well. The last third of the movie does take some turns, one thing it does show is the ability of the main character to actually change his thinking in a way that not only does justice to himself as well we his son, but also the Marines in which both of them served to varying degrees of success. There is a definite dogmatic approach by many people in this movie, but ‘Doc’ is the one that makes compromises as well as facing up to truths that for a lessor man may have been too much to deal with especially in relation to the death of his only son.

As I have already said this film is a departure of sorts for Richard Linklater, not only is it a Studio picture (Lionsgate) but it is also a co-production with Amazon Studios. Having been scarred by working on other projects with major studios it seems Linklater has made it an aim to work independently without studio interference, but he has made an exception here with “Last Flag Flying”. Linklater has created a movie that works on many levels, not only is it a comment on the Vietnam War which these characters are veterans of, it is also addressing very realistic post-9/11 concerns that are inherent in the time we live in now. The one thing I did take note of was the way in which the director treated not only the story but all of the people, this was a relaxed film that took its time finding its feet as well as what kind of movie it wanted to be. It could be that Linklater is becoming more reserved as he ages which would not be unheard of, in fact Last Flag Standing echoed Clint Eastwood’s oeuvre in a way I found quite heartening.

With many of Linklater’s films (and like many filmmakers of his generation) music especially non diegetic music plays an important part in narrative, here the director uses the songs of Levon Helm, Bob Dylan, Neil Young and Albert King to illustrate some of the salient points behind the film. In fact there is a section of the movie that uses Eminem to highlight attitudes of race, culture and age between Richard and Sal.

I recommend this film to all who enjoy the movies of Richard Linklater as well as those who also enjoy a healthy dose of politics in their entertainment. There is no doubt in my mind that this marks a different direction for the writer/director that will be interesting to see if he stays the course or this was a deviation into new territory. 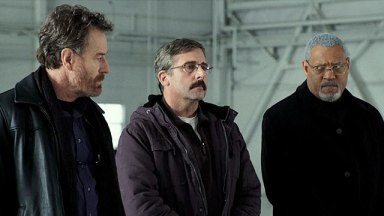