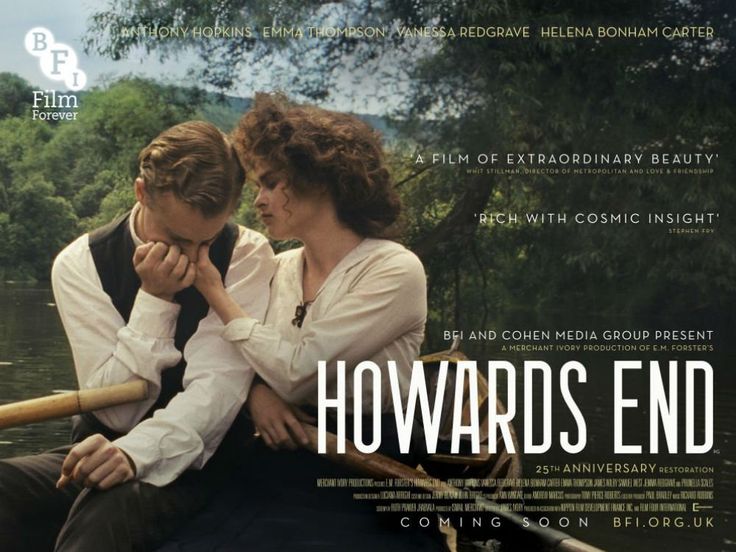 Written by: Ruth Prawer Jhabvala based on the book by E.M. Forster

Margaret Schlegel: “Unlike the Greek, England has no true mythology. All we have are witches and fairies.”

Released this month on DVD and Blu-ray is the now classic Merchant-Ivory production “Howard’s End” (1992), an adaptation of the E.M. Forster novel, the third such adaption that was produced by Ismail Merchant and James Ivory, not only that, but this was to be the most successful film they would produce after decades of creating great films both in the U.K. as well as their second home, India. After over twenty fives years later viewers could be forgiven for thinking that this film would feel aged or out of date but on the contrary it feels, looks and is directed as well any movie made in 2018, in fact many of the Merchant-Ivory movies feel that way which is a credit to all involved. They were not only very specific film makers but were prescient enough to realise that their films were not just made for the audience of their time but knew that their movies would be enjoyed for decades to come. As with many Merchant-Ivory productions it is a period piece that offers an insight into others lives within periods of social, political or a combination of both, upheaval that is expertly shown in a tight narrative that we see in a story based on very personal stories that many can relate to something the best Merchant-Ivory movies do with seeming ease. Throigh the years there have been many filmmakers that have attempted to take what Merchant-Ivory have crafted, and making their own period dramas but few have even come to close to their best movies, like “Howards End” or their masterpiece “The Remains of the Day” (1995) which prove what they could do with a great story, a magnificent cast as well as not only a great micro story but with something that could perfectly illustrate the changing English society with all the relevant social levels.

As with many Merchant-Ivory productions “Howards End” was adapted by Ruth Prawer Jhabvala who was the vital third part of the production team, she won two Oscars for her work with them, her pedigree shows able to boil down her scripts to their core elements and growing them out so that they not only had seamless narratives but each character was three dimensional as well as being ready to be inhabited by a willing actor. It may seem that the direction if this and other movies was ‘easy’ or even routine but closer inspection shows director, James Ivory as a master who was not only understated but completely underrated in his field. His style was to open up not only geographic landscapes but also intimate moments that the audience seems to be spying on, not unlike Robert Altman in a way, but quitter as well as more formalised than the American master.

“Howards End” is set in Edwardian Britain, Helen Schlegel becomes engaged to Paul Wilcox during a moment of passion, while she is staying at the country home of the Wilcox family, Howards End. The Schlegels are an intellectual family of Anglo-German bourgeoisie, while the Wilcoxes are conservative and wealthy, headed by hard-headed businessman Henry. Helen and Paul quickly decide against the engagement, but Helen has already sent a telegram informing her sister Margaret, which causes an uproar when the sisters’ Aunt Juley arrives and causes a scene. Months later, when the Wilcox family takes a flat across the street from the Schlegels in London, Margaret resumes her acquaintance with Ruth Wilcox, whom she had briefly met before.

Over the course of the next few months, the two women become very good friends, even as Mrs. Wilcox’s health declines. Hearing that the lease on the Schlegels’ house is due to expire, Ruth on her death bed bequeaths Howards End to Margaret. This causes great consternation to the Wilcoxes, who refuse to believe that Ruth was in her “right mind” or could possibly have intended her home to go to a relative stranger. The Wilcoxes burn the piece of paper on which Ruth’s bequest is written, deciding to ignore it completely.

As I have already stated one of the standout elements of almost any Merchant-Ivory film is the cast and here “Howard’s End” is a fine example of that starting with Emma Thompson who received an Oscar for this magnificent performance that solidified her as a leading lady for the next three decades. Here Thompson has to walk the line playing a character that despite her station has to operate within a number of worlds having to be completely authentic in each which of course she is. Then there is the now legendary Anthony Hopkins who had just played his most iconic role in Hannibal Lecter and was about to become one of the biggest international stars of the 1990s, here he is playing another villain (or sorts) in that he was a flawed character who affected everyone around him in a negative way, a mesmerising flawless performance where he in stark opposition to Thompsons character. The remainder of the cast is made up of extremely strong actresses in Vanessa Redgrave, Helena Bonham Carter, Jemma Redgrave and Prunella Scales who all play full formed characters even though they are definitely smaller roles but in parts that have very real consequences for the plot, something that is unique within the genre as well as something that cannot be said for many female characters in todays films.

There are three very levels of class within the film: upper-middle, middle and lower middle. In the first category, Anthony Hopkins plays Henry Wilcox, the dynamic, self-made and self-satisfied man who has amassed a fortune by exploiting mineral resources in Nigeria. He is the proprietor of Howards End, the country house, much beloved of Henry’s ailing wife Ruth (Vanessa Redgrave). In the second category are the elegant, leisured and artistically inclined Schlegel sisters of German origin: Margaret (Thompson) and Helen (Helena Bonham Carter). In the third category is Leonard Bast, played by Sam West, a bank clerk who goes in for self-improvement and becomes a little “project” of Helen’s. What we witness is not only movement within these classes but how actions that occur are treated by the different people who either too much or do not push their own agenda’s forward enough fearing the outcomes this may cause. This is very much pre-war so the loss if innocence that was to come as well as the loss of a large amount of men would start to change the way England was viewed especially with the decades to come and the eventual outbreak of World War II.

Howards End represents a lost world of early 20th-century Britain with its faded language. This was a prewar era when Germany and the Germans could be invoked without any menace as a place of continental sophistication and romance, the way Italy or France could be. The film is interestingly and valuably explicit on the subjects of class and snobbery and the struggles of the emerging bourgeoisie, although poor Leonard is destined to be a sacrificial victim in the cause of Helen and Margaret’s good intentions.

“Howard’s End” is a sumptuous looking as well as feeling movie that grabs the attention, never letting go until the final scenes of a family almost at peace, looking to the future even though that will indeed be a dark one for all of them. This is a film that dares to look at the idea of class in England, in particular London, which shows the changing face of the city as it builds its way into the future, which it would have to do so again once World War II, would rear its head, destroying much of what had been built. We are privileged to be given not only a representation of the early twentieth century but also with this film a practical look at the talents in front of as well as behind the camera. This is a film that would be followed by the Merchant-Ivory masterpiece with both Thompson and Hopkins again onscreen together in “The Remains of the Day” (1993) only one year later in possibly all involved best film as well as one of the landmark films not only of the 1990s but in the history of cinema. What we have then in “Howard’s End” is the promise of what was to come, as without this film there would not be its fitting companion piece. 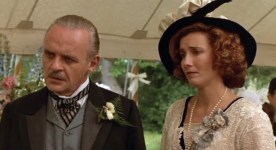