As we get closer to the lucrative summer movie season in the US there are more and more movies trying to get in early, attempting to make an impact at the box office. The one thing that has been proven by the recent “Black Panther” (2018) release date is that anytime can be a good time for the right movie. Enter the re-booted video game adaption from the best selling ‘Tomb Raider/Lara Croft’ series made famous in the 90s by the iconic game, then brought to life by the then recently Oscar awarded Angelina Jolie, firstly in the successful “Lara Croft: Tomb Raider” (2001) then in the follow up “Lara Croft Tomb Raider: Cradle of Life” (2003). Now after a successfully rebooted game it was inevitable that another movie be produced based around this, with the aptly titled “Tomb Raider” (2018), recast with the recent Oscar winner Alicia Vikander. Eschewing the fantasy elements of the first two movies this new incarnation seems willing to settle for a hodge podge of ideas that within themselves never really come off, but it is Vikander who carries this movie on her back, any kind of success can be credited to her rising star power as well as inhabiting the role far differently to Jolie.

The decision making in regards to how this film has been constructed has to be commended in giving Vikander her first real starring role after many turns in character roles, as well as bringing on board Norwegian director Roar Uthaug who while experienced in his homeland has never helmed a movie of this size or importance. What has been an odd, and has to be said unwise decision was handing over the screenwriting reins to the extremely inexperienced duo of Geneva Robertson-Dworet and Alastair Siddons who seem to use just about every cliché under the sun as well as borrowing from any ‘Mummy’ movie from the past ninety years as well as the first five seasons of the CW superhero show “Arrow” (2012–present).

“Tomb Raider” involves Lara Croft who following the disappearance of her father Richard, lives a reckless and carefree life. When she is arrested after an accident involving a police car, Richard’s business partner Ana Miller posts her bail and warns her that if she does not claim her inheritance, her father’s estate will be sold off. Lara reluctantly accepts and comes into possession of the key to her father’s office. There she finds a pre-recorded message from Richard detailing his research into Himiko, the mythical Queen of Yamatai who was said to command the power over life and death. Richard warns Lara to destroy all of his research but Lara decides to investigate further.

Lara travels to Hong Kong where she bribes Lu Ren, captain of the ship Endurance, to sail to an island believed to have once been Yamatai. The ship capsizes in a violent storm and Lara is washed ashore where she is knocked unconscious.

The strength of this movie is in the casting and to a lessor extent the way the director has marshaled the script to easily produce a movie that while mostly fast paced as well as containing some surprises, definitely offers nothing of any real originality but hints at a solid future if this movie makes enough of an impact at the box office or in critical circles. In fact many of the lessor characters seemed destined for a return in much larger roles if the franchise moves forward in the coming years.

This is easily the biggest film that Alicia Vikander has appeared in, you can tell from her first scene she has welcomed the casting as Croft by making herself into a physically imposing specimen through the use of her smallish frame making her interpretation of Croft as a quick footed, quick fisted as well as quick witted hero that can hold her own in any situation as well as against any opposition. What is appealing in terms of this movie is that Vikander is not setting herself up in opposition to the Jolie character, but sidesteps that by creating her own mostly fully developed three dimensional character that solves her Father issues about halfway through the film, unlike the original movie which had them hanging over the entire runtime. In support of Vikander we have a few top-notch character actors that have proved themselves to be most able over the past twenty years including Dominic West, Kristin Scott Thomas, Derek Jacobi and the always-enchanting Walton Goggins. It is imperative when creating a possible new franchise or reboot that they lead actor has reliable talent not only to accentuate their own performance but for the audience to have something to latch onto in introducing a new property. It is Walton Goggins who really shines as the villain of the piece as well as someone who over the years has given more than just arch performances in all his great roles including standouts in “The Shield” (2002-2008) and “Justified” (2010-2015) – here he excels with material that is frankly beneath him, but he rises above it to give one of the better performances in the film.

The picking of Roar Uthaug as director is actually an inspired choice as can be seen by his last as well as his biggest success “The Wave” (2015) which not only balanced a family drama but also was a tense thriller and ultimately part action movie, it also involved some subtle as well as obvious CGI, for a foreign film it was accomplished which explained its success on the world stage. Here Uthaug does something similar in attempting to make “Tomb Raider” all about Lara Croft, painting her as an outsider shunning her family money to make it on her own, in fact in the opening scene we see her as vulnerable but determined, a new millennial woman (but still girlish, complicated by the odd timeline incorporated in flashbacks) attractive to all – there is definitely something political about Croft but it is not handled well at all. Thrown into the mix is a family drama as well as old-fashioned soap opera with a hint of mysticism. Overall “Tomb Raider” is very well directed, with many of the action scenes handled as well as one could expect with budget and geographic restrictions – without having too much CGI – there are for example no training robots or time travel.

All the issues with “Tomb Raider” are around narrative and plot which lands squarely at the feet of screenwriters Geneva Robertson-Dworet & Alastair Siddons who not only are re-telling Crofts origins story which are not a million miles from the original “Lara Croft: Tomb Raider” but many elements seem stitched together from other adventure movies as well, as does the ending of the movie which seems to be borrowed from “Lara Croft Tomb Raider: Cradle of Life” a far better sequel that does not bear up in the box office receipts of the day. I mean these writers even give Lara her very own Bat Cave in the tomb of her dead family with maps, boxes neatly labeled with the information she requires, not only that after the eight years that have passed all the batteries on the equipment she uses still work, it may have been nice if logic had played a part in this script.

Whilst there is much to enjoy about this film, in particular the casting elements as well as many of the environments used it will not be something that stays with an audience for long which is down to the plot that is fairly feeble. This is not the all knowing multiple language speaking Croft from the previous movies, we are shown someone who is smart as well as someone who wants to make it on her own, although by the end of the movie she is more Oliver Queen than anyone else – I suspect she will get her own Scooby gang if a sequel is to follow. That is not to say that you should steer clear of Tomb Raider, in fact it might be the perfect entrée to the main course that is to follow in the coming months. 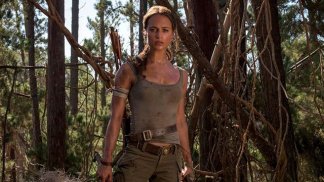