Annie: [as Annie is playing with a fake gun, she quotes Pulp Fiction] “Any of you fucking pricks move, I’m gonna execute every motherfucking last one of you!”

There is no doubt that last year was a terrible time for the comedy genre, while many of the best laughs in movies came from action and comic book movies, the best example being  the MCU movie “Thor: Ragnarok” (2017) with actors more synonymous with drama than comedy, giving some of the lighter moments of 2017. Now comes the release of one of the better comedies from the past 12 months, a road movie, come caper narrative with a range of well known actors from varying backgrounds, led strongly by both Jason Bateman and surprising to some Oscar nominee Rachel McAdams. “Game Night” (2018) is not only a refreshingly funny movie, but McAdams shines in what must be her first straight comedy role in a long time. McAdams shows some exquisite timing as well as understanding of the material, sharing some natural chemistry with Bateman, they both shine together onscreen. While the narrative as well as some of the plot borrows thematically from many previous movies, such as “The Wizard of Oz” (1939), “After Hours” (1985) or really any other road movie you can think of, it is the separate situations that all the characters find themselves in that sets this apart from many other recent comedies.

Movies that at their heart are mistaken identity movies are either exceptionally flawed, or are so complex as to be lost in their own contrivance, the classic, possibly greatest is the Hitchcock thriller “North by Northwest” (1959), almost all others are pale imitations. Where “Game Night” (2018) shines is in its embrace of humor as well as the theater of the absurd, which is what makes this movie the comedy of the past twelve months. It believes in its own story which is a real strength that it follows through on for its running time.

“Game Night” directed by John Francis Daley & Jonathan Goldstein are the pair who are possibly best known for writing the MCU/Sony movie “Spider-Man: Homecoming” (2017) which not only launched that franchise but also gave the duo another shot after the epic misfire that was the reboot, “Vacation” (2016), a bust with critics as well as at the box office. There is no doubt that the two are able screenwriters but their directing credentials were definitely questionable. Directing is all about decision making, the buck stops with that person or persons in charge, with their previous movie it was all bad, but with their new movie they have embraced what makes them unique, run with it and have created what must be an unmitigated success. Believing in their actors as well as the characters they portray is possibly their biggest strength with this movie.

“Game Night” revolves around competitive gamers Max and Annie who are trying to have a child, but their attempts are unsuccessful due to Max’s stress surrounding his feelings of inadequacy when compared to his vastly more successful, attractive brother Brooks. During Max and Annie’s routine weekend game night with their friends Ryan, and married couple Kevin and Michelle, Brooks shows up and immediately shows Max up by arriving in a Corvette Stingray and sharing an embarrassing childhood story during charades. Annie decides to work together with Max to defeat Brooks at the upcoming game night, which Brooks offers to host at his house.

When the guests arrive, including Ryan’s new date, Sarah, Brooks says he’s initiated an interactive role-playing mystery game, promising the winner his Stingray. After a while, an actor playing an FBI agent informs them of the narrative of the mystery, only for two masked men to break in and assault him and Brooks. The guests, believing it to be part of the game, idly watch. After Brooks is dragged out of the house, the couples begin to solve the mystery using the clues left behind by the actor.

On the surface it could be easily overlooked how the casting of this movie adds to the general conceit as well as the story, but to cast some very well known people primarily accepted for their comedy acumen opposite actors who are very well know for their dramatic skills is a very canny decision indeed. So we have Jason Bateman who is close to being a truly great comic actor playing against not only Rachel McAdams, but, Jesse Plemons, Michael C. Hall and Kyle Chandler, who are all gifted film as well as television actors more noted for drama than comedy. What this means for the movie as well as the performances is that all of these characters are imbued with believability not only in their portrayal but the treatment they receive from the rest of the stellar cast. The extreme characters that each of them play are so outlandish, McAdams as a wife wanting a baby, Chandler as the giver the top older brother, Hall as a cruel hit man and Plemons as a weird divorced cop that it is a requirement the cast are not only able to play them straight but the rest of the cast are funny enough to be able to run with their own characters which then paper over any believability issues that may exist within the narrative – of course these are all highly over the top as we as styled characters that are not only tropes but definite comedic archetypes.

One of the may strengths of “Game Night” like many similar road movies or mistaken identity movies is the short amount of time that it takes place over, which also means that it is self contained to the point that all plot points are explained as well as being tidily wrapped up. The narrative is fairly simple, we are introduced to all the main as well as supporting characters early on, all of their flaws as well as any plot points are all laid out within moments of meeting them, so of course any issues are dealt with so that at the conclusion of the movie we have changed as well as essentially happy characters getting on with their lives. In terms of the actual running time this movie really races along so that there is little time wasted on anything but the essentials within the movie. Something that became commonplace since the early 2000s was the extremely long running time of comedies thanks to producers and directors like Judd Apatow who took it on themselves to over engineer plots as well as narratives, which is acceptable in small doses. However what it led to was an overstuffing that meant that the editing process was ham-fisted leading to unfunny long movies with very little direction. It is pleasing after a number of years to view a movie like “Game Night” that as I have mentioned cracks along at a great pace.

Another aspect of the movie that is undeniably great is the humor, now I know that this should be a given, a comedy should be funny, but the one thing that 2017 proved was that even though a movie may call itself a comedy, actually being funny is something else entirely. Each of the many comedic moments stem naturally from the honesty of the characters so that they all feel as real as they could in a movie like “Game Night”, which is something many comedies miss, in that they initially go for laughs instead of real moments which this movie is actually full of. There are many examples of the humor, which is not only verbal but very physical as well without having to resort to mindless scenes of action. One early example is Jason Bateman being accidentally shot, then being stitched up by McAdams in one crazy but excellent scene – if you look closely I am almost positive both are laughing, but trying to hide it unsuccessfully to be sure. The movie is full of moments like this, which is refreshing especially in a movie that has such a large cast, everyone at one time or another has their own moment to shine, sometimes more than one – which again in a movie that runs mush less than two hours should be something the directors should be commended for.

If you want to watch a very funny movie, with some great story beats, a cast full of great dramatic as well as comedic actors, coupled with the fact that most of the family can watch it then “Game Night” is the movie for you. It has genuine laughs, not only that but also offer some lessons without preaching which is something many Hollywood comedies could learn a lot from. Finally it also offers some hint, I hope, as to what John Francis Daley& Jonathan Goldstein could be capable of.

“Game Night” is out now in cinemas. 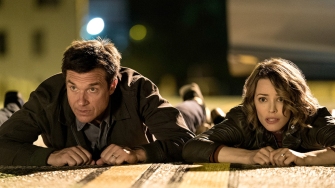